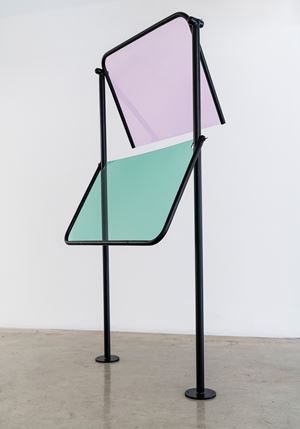 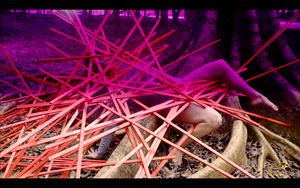 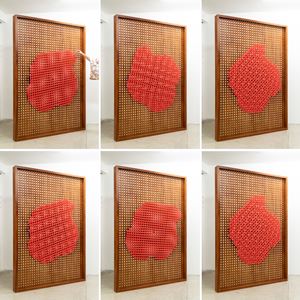 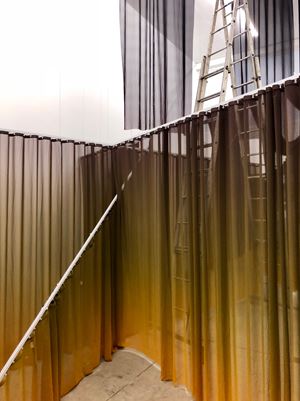 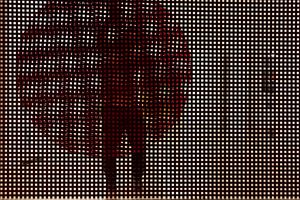 Galeria Nara Roesler | São Paulo presents Tumulto, Turbilhão [Tumult, Turmoil], Lucia Koch’s second solo show at the gallery. The two artworks that give the exhibition its title set the scene for the works that compose the show. Occupying the gallery’s main room, Tumulto [Tumult] is the interlacing of diagonal curtains that separate the space, generating a cluster of semi-transparent layers. Some of the filter-curtains appear to traverse the wall, expanding beyond the exhibition rooms.

This calculated lack of order is the driving force behind the exhibition. The counterpoint is provided by Turbilhão [Turmoil], a sort of anti-display-window. The exhibition room’s large glass window is entirely filled with a red trellis, and a sizeable circular cutout from the same trellis moves slowly with the help of an engine, creating a moiré effect that can be seen from both inside and outside the gallery. During the day, the air and noise from the street cross through the artwork into the exhibition. At night, when the gallery’s lights are on, its constant movement can be seen by passers-by outside.

Like Turbilhão, Trabalho Noturno [Night Work] evokes Koch’s experience A Longa Noite [The Long Night], exhibited at SESC Pompéia in 2018, and the workshops in which the audience was invited to build temporary structures with red wooden poles left by the artist. During one of these sessions guided by the collective Lero-Lero, a group of architecture students created a structure of a cutout trellis in a shape similar to the windows of SESC’s sports hall, which was attached to the original trellis gate and manually rotated. The experiment, from which the kinetic sculptures originated, was created by Vitor Martins, Thalissa Bechelli, Gabriel Hirata and Sariana Monsalve, who were invited to collaborate with the artist and Leo Padilha in transposing the original piece into a new autonomous sculpture, as well as the creation of Turbilhão.

Many of the answers to the big and small issues we face today are created collectively. This is also the case in Tumulto, Turbilhão, as Koch proposes collaborations and the participation of invited artists. Tramatura, which will be presented at the exhibition opening, is a performance created by the collective Balaiada Qualira, formed by artists Eliara Lua, Flora Maria, Ana Musidora and Jo dos Santos. In 2018, when visiting A Longa Noite at SESC, the group spontaneously reacted to the transformed space and the poles that were available to the public. They were subsequently invited by Koch to explore the elements with their bodies in another space and under different light.

As well as Tramatura, the collective Balaiada exhibits the video-performance Eclipse, produced with Aline Belfort. Projected in cinemascope, the video creates a kind of window for images of actions performed faraway. The use of colour filters evokes the violet light of the original actions. But in fact Tramatura and Eclipse stem from what their bodies have experienced since, whilst they weave, cross, transform and change place.

The idea of ‘filter’–as the transformation of light in a given space–is recurrent in Koch’s work. In 2007, Koch created the drink-artwork Filtro [Filter] for an exhibition at Centro Universitário Maria Antonia. It explored the induction of altered states through the mixing of substances and the installation of cinema filters on the windows of the empty space. Filtro, which at the time had its use restricted by the institution, will be served for the first time during the exhibition opening.

The opening of the show at Nara Roesler also marks the end of Koch’s exhibition Casa de Vento [Wind House], an installation at Lina Bo Bardi’s Glass House–one of the architect’s most emblematic projects, as well as her place of residence.

Sign up to be among the first to know when new exhibitions by Lucia Koch or at Galeria Nara Roesler open.