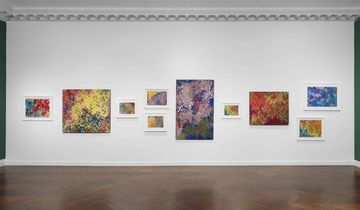 Lynne Mapp Drexler is an American artist associated with the second generation of abstract expressionist painters that emerged in the latter half of the 1950s.

Drexler's paintings exude the atmosphere of the East Coast landscapes, which she inhabited throughout much of her life in Maine. Her richly toned paintings are beautifully composed in subtly differing shades, with each brushstroke varying in direction.

Combined with variations in the thickness of impasto and the size of marks, Drexler's resulting compositions possess a layered depth, and still are able to breathe with precisely articulated areas of negative space.

Drexler's best paintings achieve that quality rarely found in abstraction, by which our initial perceptual reaction begins to slowly unravel, revealing memories wrought from the natural world whilst stirring the inner parts of our subconscious. Nature is prevalent in her works, but there is something else unknown and magical that renders Drexler's paintings remarkable.

Lynne Drexler's tale shares some traits with other women artists of her time, and indeed much of the 20th century. She moved to New York in 1956, where she studied under Hans Hofmann and Robert Motherwell, and even showed at the prestigious Tanager Gallery in 1961.

The following year she married the painter John Hultberg, under whose shadow she lived for some time. The couple often spent summers on the remote Monhegan Island in Maine, but eventually separated. Drexler lived alone on Monhegan throughout most of the 1980s—still painting prolifically—up until her death in 1999.

In its twentieth iteration, Art Basel Miami Beach returns. We share our selection of favourite artworks from the fair.

Lynne Mapp Drexler is the historical artist everyone is talking about now. Ocula Advisor Rory Mitchell delves into her exceptional practice ahead of Mnuchin Gallery and Berry Campbell Gallery's major exhibitions opening in New York.