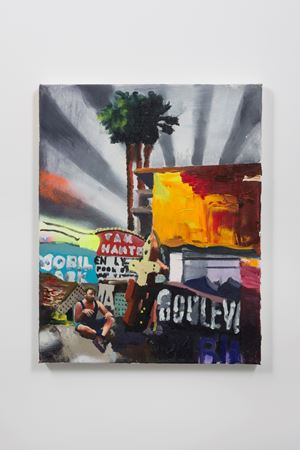 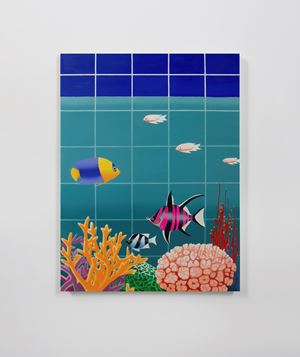 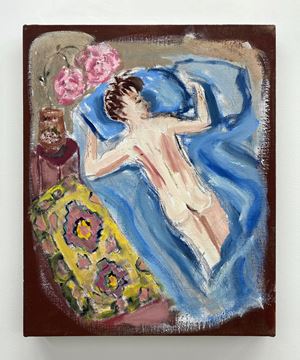 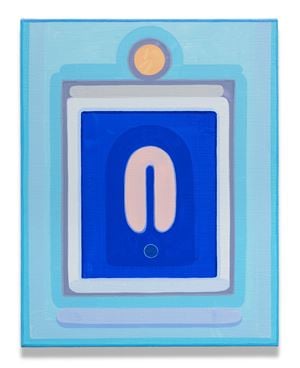 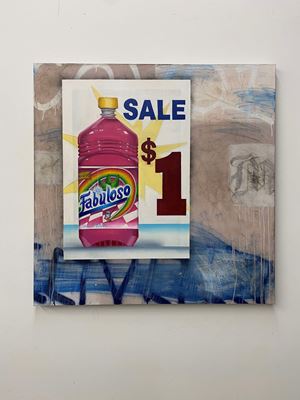 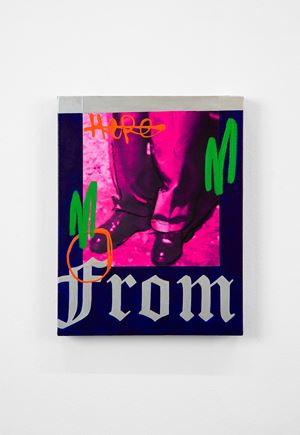 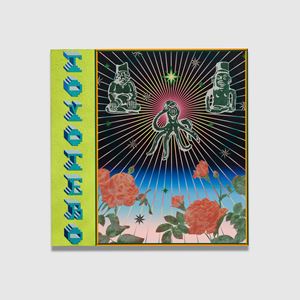 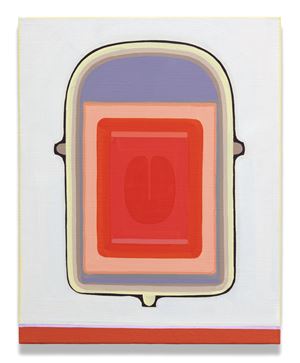 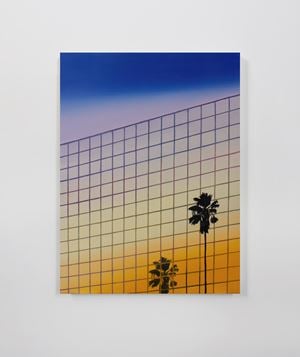 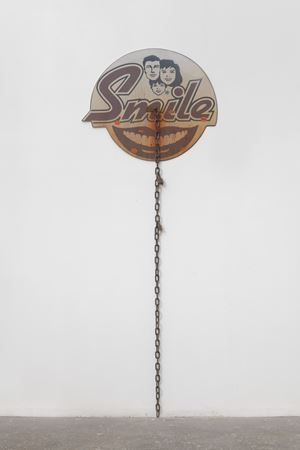 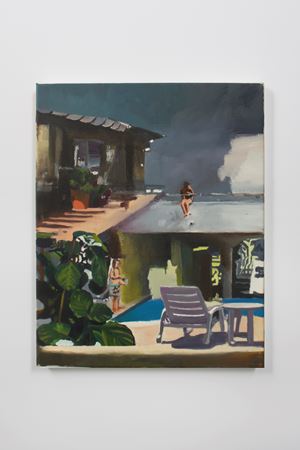 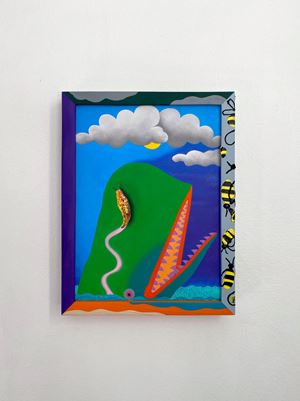 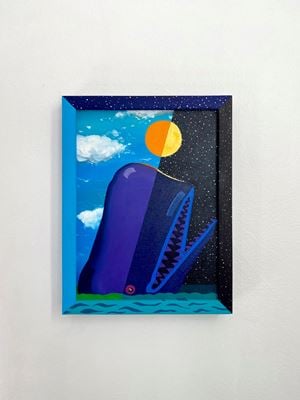 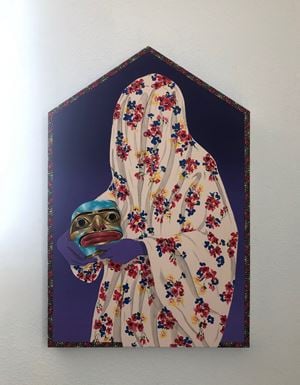 It's sixty-seven degrees and not quite yet winter in Los Angeles. Across the Pacific, MAKI Gallery presents "L.A. : Views," curated by Chelsea Petronko Rana, which highlights the work of sixteen emerging and mid-career Los Angeles-based artists. On view from December 4 through January 16, "L.A. : Views" features progressive, vibrant work across painting and sculpture.

Los Angeles is a city of multitudes – a thriving art scene at odds and in concert with the entertainment industries; indigenous land and frontier histories colliding with cutting-edge technology and architecture; a web of freeways connecting distinct beach, wetland, and mountain terrains. The artists included in the exhibition reflect this vigor, with works that express manifold interpretations of the region today. Contrary to the metropolitan melting pot, Los Angeles is a meeting point, an intersection of different attitudes, generations and cultural legacies, driven by desire and innovation as much as contrast and change. Making a left turn in this town is difficult, but as these visionaries can attest, if you want to get anywhere, just keep going forward, forward, forward.

In bold greens and pinks, the work of Gabriella Sanchez takes a decidedly punk, militant approach. In her sculpture, "WE REAP WHAT WE SEW," the eponymous text is emblazoned on a handmade flag alongside serape textile samples, bandanas and flannel and silkscreens of archival images documenting conflicts between Mexican immigrant communities and the American government. This aesthetic continues in canvas works which collage paint, neon graffiti and stencils with archival imagery.

Amir H. Fallah brings together classical Western representational painting with the dense pattern-making of his Islamic heritage in bold colors and architectural canvases. Each holding an object like a talisman or sacred offering, these contorted, anonymous figures shrouded in florals and other fantastic motifs speak to a personal narrative of belonging.

Alec Egan's paintings draw simultaneously from ornamentation and the compositional grid. In one canvas, aquamarine subway tiles ground a fantastic aquarium of corals and exotic fish. In another, a receding sunset and swaying palms are filtered against their exaggerated reflections. Egan's practice continues in the wake of artists like David Hockney, teasing out emotion through the designed environ. Likewise, Hilary Pecis's representational works are a playful peek at the private life of the artist, crafting domestic moments of tranquility. Deeply inspired by the light of Southern California, a careful still life of flowers in a coffee can or an afternoon contemplation of a backyard are dappled both with the powerful subtleties of mundane observation.

Adorned with corporate logos and indigenous icons, Jaime Muñoz's paintings are chimeric cultural amalgamations. Included is a work from his "TOYOTERO" series, which mines the shared experience of working-class laborers and popular use of R-series mini work trucks. A unique visual identity is formed in a pastiche of acrylic starbursts and thick, stucco-like impasto.

In Sayre Gomez's "Untitled," a metal sign reads SMILE followed by a leering mouth. A chain extends from the middle of the object to the floor. An eerie and ambiguous reproduction, Gomez refrains the signage of the American West as manmade relics, evidence of a communal psychology all but disguised as banal. Patrick Jackson's sculpture "Shelving Unit (3D Puzzles)", features holographic Rubik's cubes stacked atop tiered glass, forming a Modernist anti-pyramid wherein treasure-like contents appear to float, as if their levity might defy their own physical constraints. Similarly, JPW3 also could be described as a painter working through sculpture. An image of a tombstone reads "LIKES" in Helvetica Neue. Heavily manipulated via the artist's iphone, the pixelated image is then transferred again to canvas via UV print, sealing an ironic critique on internet culture through its own technology.

Painter Greg Ito's flat, graphic compositions echo a mysterious landscape in transition, riddled with coded symbologies. A sky-blue butterfly flashes above a floating door, promising an alternative future timescape of a lush, wet, sun-basked paradise just beyond the threshold. Ito's interest in narrative extends to his untraditional canvas choices, in this case a circle, in the past, a keyhole, a dome, each horizontal shape both devising and mirroring the corporeal world within his own illustrative universe.

If Ito offers an expansive view of the outside world, Marius Bercea fuses several cosmopolitan localities into one oily dystopia. Skies suffocate in deep greys of e-cigarette smoke, punctured only by the blaring probes of searchlights, automobiles and sunsets. Bercea's perspective is deeply anthropological, extracting a humanity from deserted suntanning decks and traffic jams through layered washes of acerbic pigment.

They say write what you know, but Shizu Saldamando quite literally draws from her own experience. Rendered in paint and the ballpoint pen style of the paño tradition, first begun by incarcerated Chicano in the Southwest United States who drew messages on bandanas and pillowcases, Saldamando portrays members of her own community. Part homage, part documentation, the eyeline of each subject is witness to a changing city amidst accelerated gentrification and urban sprawl.

Lily Stockman dwells around the mystical. Painting of sumptuous geometries center simple, ambiguous, u-like shapes. Despite the hardness of these abstractions, Stockman's hand is loose and intuitive. Her surfaces are ethereal coatings of diluted paint. Deeply concerned with the color relationships, these linen canvases are intricate reflections on the physical body and time.

Perhaps best known for her giant, hand-formed coiled pots, Jennifer Rochlin's small unassuming painting is an intimate pseudo-aerial perspective of a naked woman in repose. Taking cues from Impressionism, the figure wrapped in a blue sheet all but blends into the rug, flowers and other elements, made whole through sweeping, languid strokes.

Often working directly on cheap, ubiquitous IKEA frames, Devin Troy Strother's paintings boast textural assemblages of both acrylic and oils, drywall caulking, oil pastel, dry acrylic paint, cut watercolor paper, and pencil. High and low melt against one another, evaporating into a pop fusion of colorful kitsch and faux-Expressionism which humorously opines on his African American identity. Serial in nature, Craig Kucia reproduces a whale in quadruplet, the damaged - or deranged - mammal frantically jumping out of handmade artist's frames. Employing a range of techniques for each diminutive canvas, each whale spouts their own palette and allegorical allusions.

Sometimes it feels like the entire world is aflame, but maybe only Los Angeles is burning.

Be among the first to know when new artworks and exhibitions at MAKI are added to Ocula.
Sign UpLogin