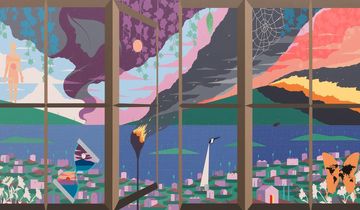 In his characteristically graphic style, Greg Ito paints dreamlike worlds that, in an intricate multi-coloured layering of silhouetted forms, weave together the familiar imagery of animals, plant-life, and the stars to convey stories of love, loss, hope, and tragedy.

Having grown up in Los Angeles Ito went on to study at San Francisco Art Institute, receiving his BFA in 2008.

While at first glance Ito's bold and cinematic paintings, on conventional rectangular and irregularly-shaped canvases, may appear silkscreened or digitally painted, they are in fact carefully hand-painted, with the occasional aid of masking tape. Deriving from his paintings, Ito's sculptures are similarly saturated in colour and often incorporate domestic objects and neon strip lights.

Ito frequently draws inspiration from his family history, dating back to his grandparents meeting at a Japanese internment camp during the Second World War. The theme of love and hope in times of violence is a recurring theme in his work, as manifested in the artist's juxtaposition of light and dark and motifs that carry contrasting associations, such as plant-life for peace, and fire for destruction.

A repertoire of motifs recur throughout Ito's paintings and sculptures. Celestial bodies such as a red sun or a yellow crescent moon inside a black orb, sometimes appear together in one painting. Goldfish and falling ginkgo leaves reference the artist's ancestry, a fourth-generation American of Japanese heritage, while wildfires or California poppies allude to his home in California.

The window is one of Ito's most prominent motifs. Many of his conventionally rectangular canvases feature a painted window frame, offering a view out to a fantastical world or into an equally mysterious interior. Shaped canvases, on the other hand, may resemble circular or arched windows. A row of five arched window-shaped canvases form the work Motion Picture (2021), which appears to simultaneously describe an outdoor and indoor scene comprising a sunset, a wildfire in the distance, and a small model of the earth with a fire underneath, while gingko leaves and poppies frame the top and bottom of the painting.

In Apparition, Ito's 2021 solo exhibition at Anat Ebgi, Los Angeles, butterflies were among the artist's favoured symbols, appearing throughout the works shown. A large butterfly takes the sun and the moon as the eyespots on its wings at the centre of Bloom, while its smaller counterpart flutters in the bottom-left corner of Heat Wave that depicts a view from a window in which a wall of fire ominously builds in the distance (both 2021). Ito also collaborated with a hatchery in South Bay to grow butterfly cocoons, introducing living butterflies to the exhibition that, once fully hatched, followed the light source to fly outside the gallery.

Greg Ito has exhibited his works in solo and group exhibitions internationally.

Greg Ito's speculative scenographies, the latest of which will be shown at ICA San Diego, offer gestures for healing.