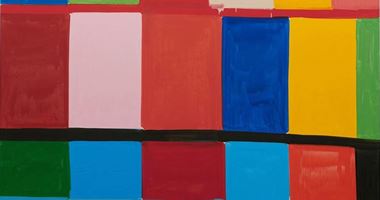 Living and working in New York, Stanley Whitney is a widely exhibited abstract painter. His iconic loosely structured shifting grids of differently marked and hued rectangles are a unique individual blend of cherry-picked aspects of Minimalism and Colour Field Painting combined with various other personal influences.

Stanley Whitney's work has featured in solo and group exhibitions in galleries and institutions across America and Europe. The prize-winning artist's artworks can also be found in prominent public collections such as the Solomon R. Guggenheim Museum, New York; The Metropolitan Museum of Art, New York; Philadelphia Museum of Art; National Gallery of Canada, Ottawa; Magazzino Arte Moderna, Rome; Whitney Museum of American Art, New York; and The Studio Museum in Harlem. He is also a professor emeritus of painting and drawing at Temple University's Tyler School of Art and Architecture in Philadelphia. He has featured in major international shows including documenta 14, Athens and Kassel, and the 50th Venice Biennale in 2003.

Born in Philadelphia in 1946 and raised in a small Afro-American community in Bryn Mawr, Pennsylvania, Whitney began drawing illustrations for his high school newspaper in the late 1950s. In 1964 the budding artist went to study at Columbus College of Art & Design in Ohio, transferring to the Kansas City Art Institute in 1966 to complete a BFA in 1968. Whitney would later study fine art at Yale University, graduating with an MFA in 1972.

Moving to New York in 1968, Whitney arrived amidst a bustling contemporary art scene with strong leanings towards abstraction and Colour Field Painting, with Minimalism beginning to emerge as well. As Whitney experimented with his own style, he was exposed to the work of an assortment of artists that included Barnett Newman, Al Held, Willem de Kooning, and Brice Marden as well as drawing inspiration from the art historical canon including Vincent van Gogh, Piet Mondrian, and Morris Louis.

Through the 1970s and 1980s, after graduating from Yale Whitney taught at the University of Rhode Island; Tyler School; Stanford University; and the University of California, Berkley while simultaneously experimenting to develop his own style. His work of that period, though highly varied, was defined by a quest to find a sense of space that was light and airy. In the monographs, screen prints, drawings, and acrylic works of that time he attempted to achieve this by creating large areas of space between swirling gestural marks that overlapped over fields of colour, sometimes with large circles and splotches of colour.

Through an opportunity given by the Tyler School of Art and Architecture to teach in Rome Whitney moved to Italy with his wife in 1992—a period that the artist credits for a change to his work. The nature of the architecture and museum spaces he personally saw in Rome inspired him to begin stacking his colour in a more ordered approach.

A trip to Egypt in 1993 resolved the last piece of the puzzle for Whitney. There he found inspiration in the density of the architecture. He abandoned placing blocks of colours inside a colour field, instead placing the blocks of colour together to create the space themselves.

The outcome of these key developments in Whitney's style are evident in exhibitions like In the Color (Lisson Gallery, New York, 3 November–21 December 2018), which explored the artist's signature works from the 1990s onwards. From Untitled (1998) to In the Colour (2018) the artist retains a similar characteristic of stacked colourful blocks divided horizontally by imperfect lines. Comparisons have been drawn both to the work of artists like Agnes Martin, Josef Albers, and Sol LeWitt, and to various patterns of textiles found around the globe. Each block of colour within the broader work is unique: shrinking from the border with other colours or bleeding into them, sometimes appearing as a solid block and other times as something more translucent, and in some cases bearing the energetic gestural lines seen in some of his earlier works.

Whitney's signature style, which has seen him receive awards including the 2011 Robert De Niro, Sr. Prize and an Art award from the American Academy of Arts and Letters 2010, is the result of a lifelong obsession with colour and space, inspired by the varied influences of Titian, Diego Velázquez, Paul Cézanne, Mondrian, Barnett Newman, and Donald Judd among others. Whitney once told John Yau 'I want to paint every colour in the world.'

Alongside his artistic fascination with colour and the influences of textiles, jazz music has been a major component of Whitney's work. The energy and rhythm are evident in the compositions of his works—seemingly structured but still free and vibrant, while the artist often also works accompanied by jazz. It is a familiar element that has always been, and continues to be, a part of his life, just like art.

Stanley Whitney was born in 1946 in Philadelphia and currently lives and works in New York and Solignano, Italy.

His works have been featured in numerous international exhibitions since the early seventies. This year his work was presented in a solo-exhibition at the Studio Museum in Harlem (July-October 2015) and at Karma Karma, New York City (June-August). His work was part of the 50th Venice Biennale (2003) in the project Utopia Station, and was also shown in the Dakar Biennal (2004).

Museum exhibitions include the National Academy Museum, New York (2012), the Nelson-Atkins Museum of Art, Kansas City (2008), the University of Dayton, Dayton, Ohio (1991), the Pennsylvania Academy of Fine Arts, Philadelphia (1985), the Brooklyn Academy of Music (1983), the Alternative Museum, New York (1981), the Studio Museum in Harlem (1981) and the Aldrich Museum of Contemporary Art, Ridgefield (1976).

He is the recipient of the John Guggenheim Fellowship (1996) and Pollock-Krasner Fellowship (2002) as well as winning the First Robert De Niro Sr. Prize in Painting (2011).

Monika Szewczyk, the director of de Appel in Amsterdam, discusses the importance of creating the conditions for deep study.

Stanley Whitney's gorgeous grids of colour are a joy to view online, as they are in person.

MAHÓN, Menorca — I usually don't go around ranking artists but I was enormously impressed by the Albert Oehlen retrospective in Venice this past January. I thought, who do we have as good as this guy

Read More
Related Press “I Want to Paint Every Color in the World” 11 August 2018, Hyperallergic

The one constant running through all of my writing on Whitney is his works on paper, which I am thinking about in the broadest sense—from the densely linear graphite concatenations he made in the late

Be among the first to know when new artworks and exhibitions by Stanley Whitney are added to Ocula.
Sign UpLogin