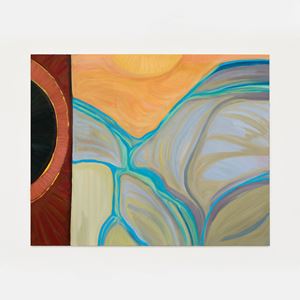 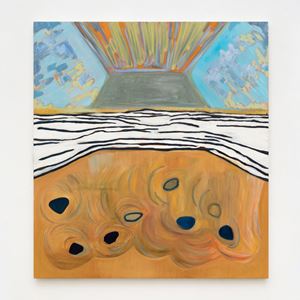 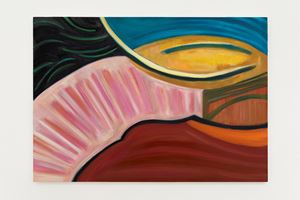 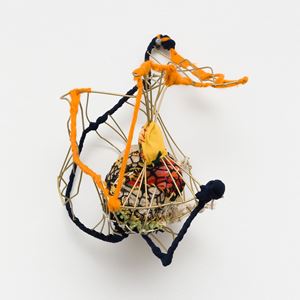 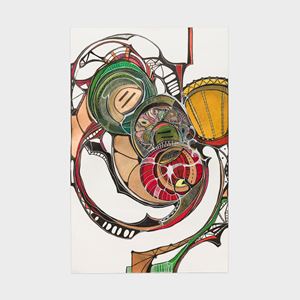 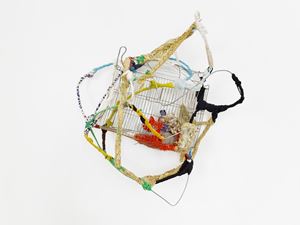 Pace Gallery is pleased to present Sonia Gomes / Marina Perez Simão, an exhibition of recent works by two leading Brazilian artists. The show marks Gomes' first exhibition with Pace since joining the gallery in June as well as Perez Simão's first project-based collaboration with Pace. An exploration into the ambiguity of abstraction, the presentation features five recent and historical sculptures by Gomes, nine new paintings by Perez Simão, and the artists' first collaborative piece, synthesising their distinct aesthetics as a singular whole employing oil paint and embroidery. Inspired by the environment and past of their native Brazil, the works on display evoke landscapes poised between the chimerical and historical, as well as the personal and collective, while pointing to the dialogue between literature and the visual arts. The exhibition will take place at Pace's East Hampton venue from September 3–27, 2020.

Celebrated internationally for her abstract sculptures combining secondhand textiles with everyday materials, such as furniture, driftwood, and wire, Gomes is a barrier-breaking figure as the first living AfroBrazilian woman artist to have a monographic show, Sonia Gomes: Still I Rise, at the São Paulo Museum of Art (MASP), in 2018. Through their tensile, slack and contorted forms, works such as Cordão dos Mentecaptos [Cord of the Insane] (2016) exude an enigmatic vitality and organicity suggestive of both the human body and Brazil's flora and fauna. Her practice actively reclaims Afro-Brazilian traditions as well as feminized crafts from the margins of history. 'I always sought nonconformity with things that are established,' Gomes explains of her art. It is also rich in literary references. Her recurrent use of bird cages, as seen, for instance, in Vôo [Flight] (2014), operates as a potent allusion to emancipatory struggles and the poetry of Maya Angelou, whose verses inspired the title and premise of Gomes's momentous solo exhibition at MASP.

At the cusp between abstraction and figuration, the paintings of Perez Simão present fluid forms in subtle chromatic harmonies that conjure the auratic and transformational qualities of luminous, open vistas without ever depicting any specific place in explicit detail. Revelling in their ambiguity and harnessing the power of suggestion, canvases, such as Untitled (2020, 19 ¾ x 15 ¾ in), Untitled (2019, 72 ½ x 52 ¾ in) and Untitled (2020, 57 1/8 x 52 ¾ in), operate like the poetry that inspires Perez Simão: they evoke the sensations, moods, and rhythms of memories and places, rather than dispatch clear-cut messages in overt terms. When seen as a group, her works can formally rhyme and thereby intimate loose storylines—an indirect consequence of the artist's approach to working on multiple canvases at once. 'I feel that there is a sort of narrative in my paintings,' Perez Simão explains, 'Passing from one element to the next is very important to me, the fluidity and ambivalence.' In this way, Perez Simão opens her work to the interpretational creativity of the viewer and thumbs the gap between representation and language, the lived and the said, the palpable and invisible.

Gomes, who recently joined Pace, has several major upcoming projects including commissioned works for the 2021 Gwangju Biennale and 2021 Liverpool Biennial. In 2022, Gomes will have her first solo exhibition with Pace Gallery at its venue in New York City.

Sonia Gomes (b. 1948, Caetanópolis, Brazil) combines secondhand textiles with everyday materials, such as furniture, driftwood, and wire, to create abstract sculptures that reclaim Afro-Brazilian traditions and feminised crafts from the margins of history.

Juxtaposing tensile and slack forms, Gomes's contorted sculptures exude a corporeality and dynamism that she attributes to her love of popular Brazilian dances. At the same time, her work's vitality evokes the enigmatic animism of sacred objects used in the spiritual practices of Brazil's African diaspora—rites that the artist witnessed her grandmother, a shaman, perform during her childhood. Born in the Brazilian city of Caetanópolis, a once-important manufacturing centre for textiles, Gomes uses found or gifted fabrics, which, according to her, 'bring the history of the people that they belonged to." "I give a new significance to them,' she adds. Her assemblages thus tie Brazil's historical trajectory to the long-disregarded narratives of women, people of colour, and countless anonymous individuals.

Through its recycling of used fabric, Gomes's work also evinces a principle of thrift that is both a consequence of Brazil's rapid and uneven industrial development and a dissenting answer to its accompanying culture of wasteful consumption and environmental destruction. As a whole, her art is marked by a decolonizing impulse, providing oblique responses to the social inequities and ecological urgencies of present-day Brazil and, more broadly, a globalised world.

Marina Perez Simão (b. 1981,Vitória, Brazil) has developed a working process based fundamentally on the accumulation and juxtaposition of memories and images. By combining personal experiences and multiple references stemming from fields such as philosophy, literature, and journalism, the artist collects certain narratives in order to edit them through pictorial means that do not belong to any predefined language; rather, they develop with an organic practice, which combines thematic density and a delicate treatment.

Simão uses a variety of techniques, such as collage, drawing, and oil painting, as starting points in order to marry interior and exterior landscapes, she composes visual journeys that sometimes traverse the unknown, the abstract and the nebulous, but also include visions and memories. Simão's work leads us into territories in which we are confronted with that which is ungraspable, with that elusive and unspeakable instant that poets strive so hard to capture with their words. 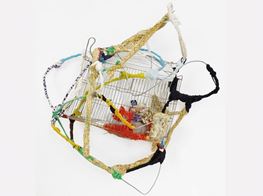 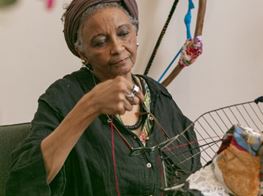 Sign up to be among the first to know when new exhibitions by Sonia Gomes / Marina Perez Simão or at Pace Gallery open.