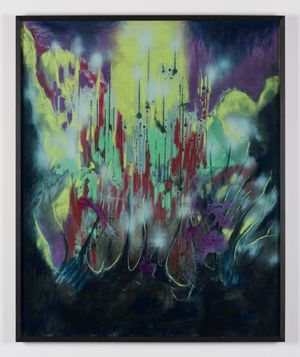 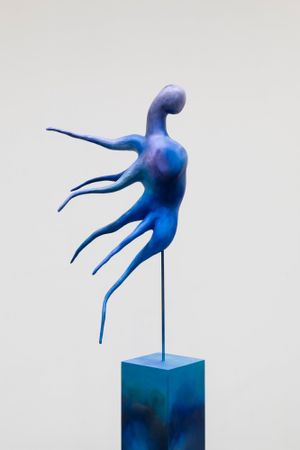 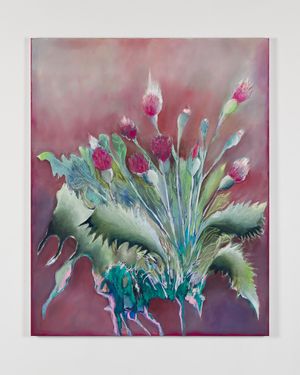 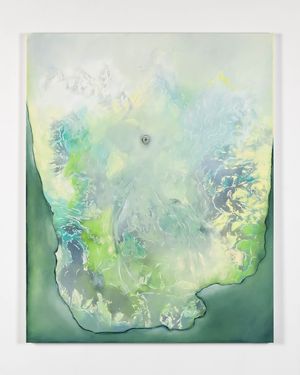 SETAREH is pleased to present Studio Views, a new online series displaying recent works of artists represented by the gallery. This Viewing Room highlights the latest works of Bettina Scholz.

Inspired by music, film and literature, Bettina Scholz creates pulsating pictorial organisms with a wide range of painting techniques. Besides sculpture and paintings on canvas, Scholz is known for complex paintings framed behind partly painted glass which remind of snapshots of frozen movement and floating processes. They bring to mind microscopic views created by chemical processes, but also cosmic spheres and off-world landscapes. These atmospherically charged scenarios are inspired by science fiction, techno and classical music. This referents create a visual, synesthetic connection between its different art forms.

Her artworks open up new dimensions while reaching out to the viewers aesthetic experience. Further, they challenge our media influenced viewing habits and enrich them towards new and foreign perspectives. The fathomless depth of the depicted, lets us linger a while looking at the painting. A dark and somehow gloomy view at first sight, turns out to be a precisely differentiated representation of beauty.

In order to create these dramatic, at times auratic visual effects, the artist experiments like an alchemist: she sprinkles, drips, sprays and collages the image carrier. Above, she mounts colored glass panes, some of which are also painted. In Addition to the transparency and covering effect of the glass, its reflection of the given exhibition space allows the viewer to become a part of the artwork. These atmospherically charged scenarios seem familiar to us from science fiction films and literature. In contrast to that, some of the painting seem almost baroque in their reminiscent of Christian depictions of saints. These created motifs fulfill a traditional overall picture, as well as the historical technique of reverse glass painting experience. There is a traditional as well as contemporary and future-oriented interpretation, in Bettina Scholz's works. Through their given complexity and ambiguity, the artworks open up and give the viewer the opportunity to explore progressive perceptions.

'Songs have the possibility to freely pass spaces and time and to connect them through their immateriality. I have transferred this idea onto the paintings. They became a counter magic for me – a way to win back freedom imaginatively.'

'I enjoy thinking of my pictures as free beings who—just like songs—can connect seaveral times, which are not bound to our linear experience of time.'

She offers the viewer the possibility to capture her works in an over-dimensional size, as well as on small-format canvases and works on paper. The paintings, drawings and collages are often thematically based on terms and ideas that the artist finds in the course of her search engine and can turn out to be far more figurative than the glass pictures.

'In all my work, the convergence of different time periods plays a very important role, both visually and in terms of content. I describe it as an associative thunderstorm of flash lights that surrounds me and which I derive into the pictures.'

Bettina Scholz studied fine arts and painting at the Weißensee Kunsthochschule Berlin and at the Chelsea College of Arts in London. In 2012 she graduated as a master student of Antje Majewski. She lives and works in Berlin, where she has held a teaching position at the University of Arts since 2014. In 2020 she was nominated for the Kunstpreis/ Kunsthalle Lingen, Germany. Most recently she was featured in the group exhibition HYPER! A Journey into Art and Music at the 'Deichtorhallen Hamburg'. Currently Bettina Scholz is on display at the Kunsthal Museum Rotterdam, in conjunction with the exhibition Black Album/ White Cube. The Exhibition is on view until January 17, 2021.