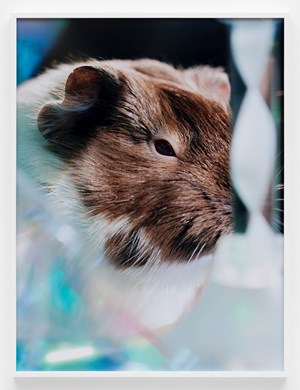 Simon Lee Gallery, New York, is pleased to present Studio Photography: 1887—2019, a wide-ranging survey exhibition featuring work by a diverse group of artists whose studio-based practices span the past 130 years. During this time period, the establishment of photography as an artistic medium, the ensuing major advancements in image capture technology and the resulting evolution of photography from an intensive, specialised art form to an inescape aspect of everyday life, has led to innovative developments in the field of fine art photography.

For contemporary photographers, working from the studio is no longer a material necessity. but rather a deliberate choice, one that enables them to explore the history of the medium, along with its connections to other fields of production, including cinema, sculpture, and advertising. Sarah Charlesworth’s 1995 tableau Doubleworld is indicative of the former impulse. In this work, Charlesworth stages two 19th century stereoscopes fitted with identical slides, recursively drawing our attention to the mechanical apparatuses that facilitate the consumption of images. Doubling and mirroring, both intrinsic effects of photography, play out in Doubleworld, setting the stage for the exhibition’s examination of highly referential, conceptually evocative compositions.

Other artists posit the studio as a site of interrogation in its own right. Wolfgang Tillmans’ 2007 photograph Easter Passion, depicts another series by the artist fastidiously pinned to the wall, foregrounded by the common supplies, papers, and work furniture that accompany studio production. Culled from a larger body of work set in Tillmans’ studio, Easter Passion evokes the traditional role of the studio as subject matter, while simultaneously imbuing the trope with a sentimental temporality. Similarly, Patricia L. Boyd’s Impression 37.75249449999999 | -122.41272320000002 (1) (2016), records the markings, debris, and graffiti as they appear on her former studio’s window. Just as its title logs the geographic coordinates of the artist’s workspace, the work constructs a hyperlocal record, utilising a light-sensitive material to index both the visible and invisible information inscripted on the two-panel window. One of the exhibition’s few cameraless pictures, Boyd’s photogram applies an early form of image-capture to novel purpose, and, in the process, expands our notion of studio photography today.

14 new artworks have recently been added by Simon Lee Gallery.
Sign up now to be among the first to know when new artworks are added.