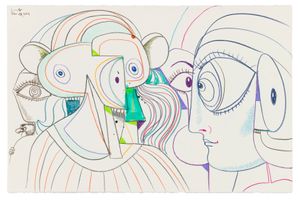 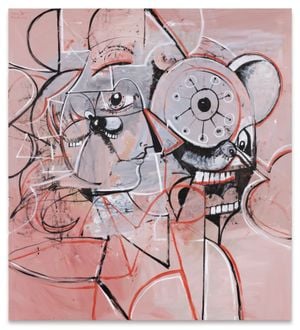 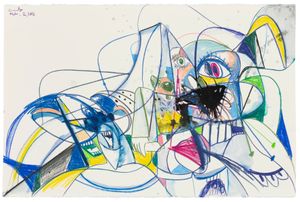 Monika Sprüth and Philomene Magers are pleased to present Linear Expression, an exhibition of recent works on canvas and paper by George Condo that are exemplary of his wide-ranging practice. In particular, they display his virtuosic and varied use of line to delineate the mysterious, symbolic figures that have populated his works for more than four decades. Using quick, calculated gestures, which are then overlaid with rich tonalities and brushwork, Condo's imaginary portraits invoke the kaleidoscopic range of human emotion.

With this new body of work, abstracted characters hold space together but rarely connect through eye contact or touch—a reflection, perhaps, of the past year of uncertainty and distance. Condo links them instead through his complex matrix of lines and gestures. In the painting Anticipation (2021), a palette of creams and pinks—starkly demarcated with black outlines—evokes the human body, as do two pairs of wide-open eyes and a suited torso; while brisk strokes of red, white and blue, as well as deliberate drips and spatters, generate the frenetic, expressionistic energy reflected in the work's title.

Another oil-on-linen painting, Linear Portrait Composition (2021), introduces the characters for which Condo is so well known: the serene girl, seen in profile and reminiscent of Picasso's classical period nudes; the cartoonish, dog-like figure, whose bulbous black nose and rounded cheeks introduce an element of absurdity to the scene; and the mad, toothy male visage, who here seems to have a cell for a brain, or even a virus. Held together via intersecting geometric planes, they each represent different states of being often trapped within one psyche.

Linear Expression also includes a number of drawings—a medium that has always been crucial to the artist's way of working, and whose intimacy allows the flair and diversity of Condo's draftsmanship to come to the fore. On the one hand are works with open, airy networks of wax crayon lines in cool hues, as in The Unexpected Guest (2020) and Seated Drinkers (2020), which coalesce in groups of figures who gaze across the page or directly toward the viewer. On the other hand, the buildup of inked strokes, colourful facets, and differing methods of mark-making in Scrambled Heads (2021) exudes a layered, cacophonous intensity.

Still other drawings combine Condo's stylistic poles within one composition. In Modern Romance (2021), one of his full-cheeked figures with striking green eyes looms over the portrait of a woman who looks intently to the left. Her precise linear rendering and fanciful collar, as well as the work's sepia tones, recall the eighteenth-century old master drawing traditions that have long influenced Condo. Abstract Figure Composition (2021), meanwhile, positions a highly worked surface with tortured facial features on the left opposite an ethereal, Botticelli-like form on the right, heightening the juxtaposition of the abject and the beautiful that is the cornerstone of the artist's practice. At times tender, at times violent, Condo's new works illustrate his longstanding pursuit to capture the complex and often contradictory nature of human life.

Sign up to be among the first to know when new exhibitions by George Condo or at Sprüth Magers open.
Sign UpLogin