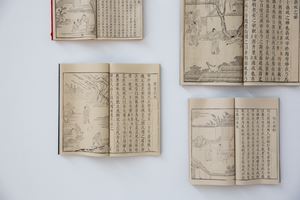 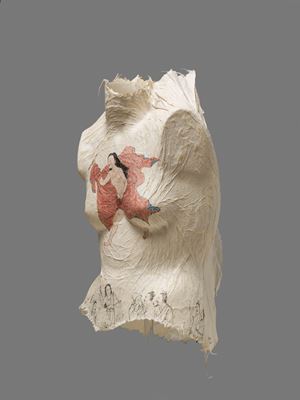 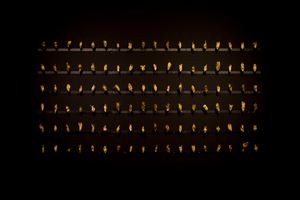 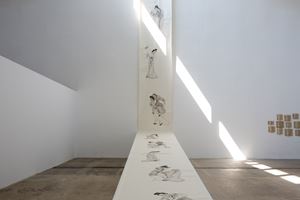 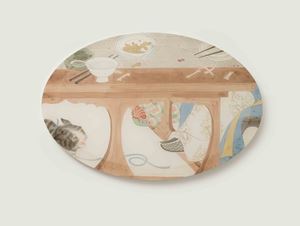 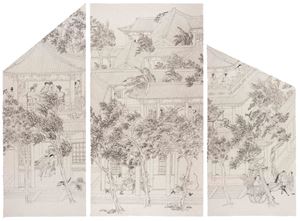 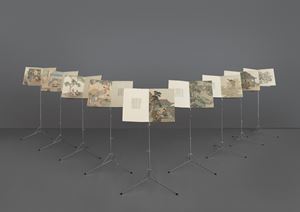 One of the prominent contemporary artists in China, Peng Wei is known for her paintings of landscapes and Taihu rocks, of Western faces rendered in Asian mediums, of delicate embroidered shoes and robes. Through her meticulous brushwork and application of ink across flax paper, cotton paper, or silk, an abiding spirit of centuries-long tradition enlaces her contemporary interpretation. The artist examines Chinese culture through a rigorous scrutiny of literati imagery that has in recent years gravitated toward femininity in a dialectical approach to gender and culture.

The image of the female in different ancient Chinese narratives elicits a foreign feeling in Peng Wei that disaccords with her idea of women. Stunned, confused, and bewildered, she finds the portrayal of the female—whether the exemplars in Paragons of Feminine Virtue by Ming-dynasty thinker Lv Kun, or the fox spirits and female ghosts in Strange Tales from the Chinese Studio by Qing-dynasty novelist Pu Songling—to be indistinguishable products of the male gaze that could be anonymously reproduced to reinforce patriarchal values. Peng Wei isolates these images from their original contexts, and transforms them into new narratives where the posture and the body of these women educes a strange feeling that becomes tacitly amplified. The body of these women reemerges as a new tale, or a spectacle in and of itself. The dissimilitude, misappropriation, and vacancy among these images of women create interstices which the artist adroitly leverages into a singular, feminine space by recontexualising the parables or spectacularising gender.

The 50-meter-long Old Tales Retold (2019) decontextualises the exemplars from Ming-dynasty thinker Lv Kun's Paragons of Feminine Virtue through freehand brushwork that brings these women to life, highlighting the female body. 'The One in My Dreams' series (2020) is inspired by female ghosts from Chinese folklore. Disengaged from the original context, the painting is centered on the manifestation of the ghostly spirit—the female apparition turns into a spectacle. The juxtaposition of the imagery and Western authors' letters embodies the artist's attempt to recontextualise the disoriented persona.

By simultaneously distancing herself and retaining her agency, the artist conjures a kaleidoscopic microcosm of narrative possibilities in the 'Seven Nights' series. The series consists of seven sets, each a portrayal of a courtyard and the events that went on therein which she once saw in her dreams. The skewed and scaled contours of the painting not only echo the architecture in the courtyard, but also evoke a three-dimensional illusion that allows the viewer to see past the invisible façade of the buildings. Inspired by 'Seven Nights,' the 'Peek' series attests the artist's scrutiny of details, where carefully selected narratives are ingeniously magnified.

The 'Hi-Ne-Ni' and 'This Is Her' series represent two ends on Peng Wei's artistic spectrum. The former comprises paper-plastered female mannequin busts, the latter a constellation of small paintings in European antique mirror frames. The female body in 'Hi-Ne-Ni' morphs into a spectacle as much as an eventful space where inscrutable tales unfold, while 'This Is Her' exudes a charm that permeates each delicate mirror frame—once vacant, awaiting a special painting: Peng Wei fills these frames with unique works that navigate feminine sensibility.

Feminine Space serves as a chance for the viewer to see not merely the artist's sophisticated application of ink, but also her perspective on femininity. Peng Wei's contemplation on what it means to be female, as well as her depiction of women rendered in varying mediums also privileges the female vantage point. Her stance is less an insouciant look from afar than an earnest gaze that pierces through the ancient works of Chinese literature, as she wields her paintbrush adamantly across the paper. This feminine gaze ultimately returns the prerogative of narrative to women, at the same time, hinting at another way to reimagine feminine aesthetics in contemporary society.

Sign up to be among the first to know when new exhibitions by Peng Wei or at Tina Keng Gallery open.