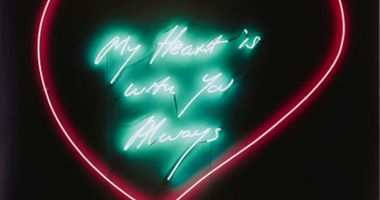 Confessional, candid, challenging and poignant. These are some of the words commonly used to describe the expressive conceptual works of Tracey Emin CBE, one of the influential Young British Artists who emerged in the 1990s.

Born in London in 1963, where she now lives and works, Tracey Karima Emin grew up in the seaside town of Margate. She was inspired by the expressive qualities of JMW Turner and Egon Schiele from an early age, and closely studied their styles as a student. From 1983 she studied a fine arts degree at Maidstone College of Art in Kent. Returning to London, she graduated from the Royal College of Art with an MA in painting.

Emin was one of the Young British Artists (YBAs)—a loose grouping of artists who became known for their nonconformist art and larger-than-life attitudes in the 1990s. Among her YBA contemporaries—including Damien Hirst and Jake and Dinos Chapman—Emin was close friends with Sarah Lucas, and in 1993 the two young artists opened a shop to sell their artworks. Emin's breakthrough works starkly expressed some of her more personal and traumatic experiences in life.

Tracey Emin's work encompasses painting, installation, sculpture, photography, embroidery, neon and drawing. A modern-day Expressionist, she is most celebrated for her portrayal of universal experiences, drawn from her own personal memories, dreams and body.

Everyone I Have Ever Slept With

Emin's breakthrough came from the works that, through their stark honesty to the point of provocation, deconstructed the border between life and art, and openly shared her personal experiences. Inside a tent, Emin appliquéd the names of every person she had shared a bed with from the time of her birth to the year 1995, thus creating Everyone I Have Ever Slept With 1963—1995 (1995).

One of Emin's most iconic works, My Bed (1998), is an installation of her bed from a depressive phase when she did not leave her bed for several days. Surrounding the unmade mattress are empty bottles, used condoms and tissues, which immortalise a particular moment in the artist's life with its loneliness, despair and private suffering intact. Emotionally powerful and outrageously frank, Emin's works redefined the ways in which a female artist could discuss herself—her life, her body—in public.

Often at the centre of Emin's work is the female nude, especially her own—a tendency that has led some critics to regard her oeuvre as feminist. Although the artist herself has somewhat denied association, her blunt exploration of the female body and sexuality reflect the feminist belief that a woman can define her own sexuality.

Between 2009 and 2010, Emin collaborated with Louise Bourgeois in the last months of the famously feminist artist's life. In the resulting exhibition Do Not Abandon Me (2011), the autobiographical paintings showed the two artists engaging in different aspects of their lives, from Emin's traumatic memories to Bourgeois' experience as a mother.

In relation to the use of the female body in her work, Emin reflected in a conversation with Ocula Magazine that 'I know my body better than anyone else. I am my best model; it makes it really different that I am the woman because I am not viewing my body with a sexual gaze but with an understanding one.'

Emin has produced a number of sculptures for public places.

Her first public work, Roman Standard (2005), commissioned by the BBC presented a small bronze bird on a four meter pole, positioned outside The Oratory in Liverpool, opposite the Anglican Cathedral. The bird makes reference to the city's emblematic mythical Liver bird.

In 2018, Emin won the international competition to design a sculpture to be installed outside the new Munch Museum on Museum Island, Oslo. Her winning sculpture, The Mother, is a monumental 7-metre high bronze statue of a naked woman kneeling facing towards the Fjord.

Declared a 'national treasure' by the Guardian in 2015, the Royal Academician has represented Britain at the 52nd Venice Biennale, and she was awarded a CBE in 2013 for services to the arts. She was elected to the Royal Academy in 2007, the same year she was bestowed an honorary doctorate by the University of Kent.

Tracey Emin has exhibted extensively in solo and group exhibitions in numerous international galleries and institutions around the world.

Solo and duo exhibitions include Tracey Emin / Edvard Munch, The Loneliness of the Soul, Royal Academy of Arts, London (2020); The Fear of Loving. Orsay through the eyes of Tracey Emin, Musée d'Orsay, Paris (2019); She Lay Down Beneath the Sea, Turner Contemporary, Margate (2012); Love is What You Want, Hayward Gallery, London (2011); 20 Years, Scottish National Gallery of Modern Art, Edinburgh (2008); and Ten Years: Tracey Emin, Stedelijk Museum, Amsterdam (2002).

Emin recently announced plans to convert a former bathhouse and mortuary into 'an artist's haven' in Margate, England.

Read More
Related Press Tracey Emin on Being “Bombarded” By 2017, and Her Year of Honesty Ahead 11 December 2017, Vanity Fair

When someone talks about sharks at Art Basel Miami Beach, typically they're referring to powerful collectors and art dealers who swim through the annual art fair gobbling up everything they see. But w

Tracey Emin speaks to writer, curator and artist Kenny Schachter on the occasion of her exhibition Detail of Love at Xavier Hufkens, Brussels (30 October — 19 December 2020).

Be among the first to know when new artworks and exhibitions by Tracey Emin are added to Ocula.
Sign Up Login