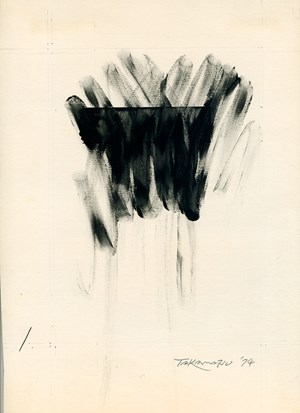 Jiro Takamatsu's 'Rubbing' is a series of drawings the artist began to produce in 1970. By the early '70s, Takamatsu was a respected figure in the contemporary art world, having already presented some of the most important work of his career, such as the Shadow, Perspective and Oneness series. In parallel, Takamatsu also worked on a large number of drawings, including his rubbings. For these, he would draw black geometric forms on paper, and rub them using his fingers or other means to create pictures in which disharmony and white noise intervene in pure forms. By adding the act of rubbing, it could also be said that Takamatsu was highlighting the material nature of paint, and attempting to shift pure forms into physical time and space.

Robert Morris, who died last year, is considered a leading figure in Minimalist and Conceptual art of the same period. In 1973 he began to work on what he dubbed his 'Blind Time' drawing series. Changing techniques and materials over the years, Morris produced several series of Blind Time drawings between 1973 and 2001. In them, he experimented with drawing in a sightless state, rendering himself blind by obstructing his vision. Morris made these works using the fingers of both hands to rub graphite or ink directly on the support. Fundamentally, all of the Blind Time series were grounded in the concept of finding 'a basis for drawing other than straightforward representation, on the one hand, and the nonrepresentational on the other,'1 in what was at once Morris's way of challenging the history of Western art, with its reliance on the visual, and simultaneously expressing his interest in the workings of the spirit when an individual is deprived of external perceptual information.

Both groups of works, coincidentally undertaken by Jiro Takamatsu and Robert Morris during the same period, involved direct physical intervention by the artist in the picture plane, inserting doubts about visuality, and the purity of conceptual forms. Focusing on this feature common to both, the exhibition will be divided into two separate periods: the first consisting of six of Takamatsu's Rubbing drawings and three from Morris's Blind Time series, and the second, in addition to three works by Morris from the 1970s, examples from the Blind Time series produced in the '80s and '90s (there will be no display of works by Takamatsu in the second half). Don't miss the opportunity to view these works exploring shared concerns and processes by two artists central to the development of contemporary art, working on opposite sides of the globe.

Sign up to be among the first to know when new exhibitions by Robert Morris, Jiro Takamatsu or at Yumiko Chiba Associates open.
Sign Up