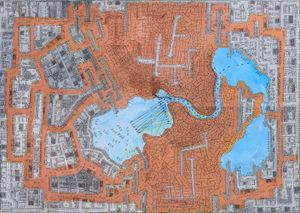 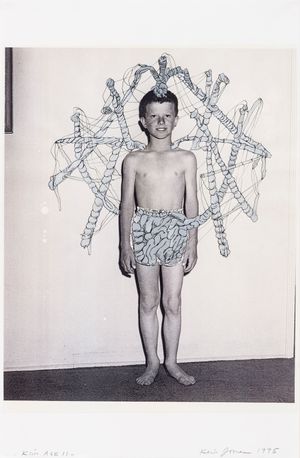 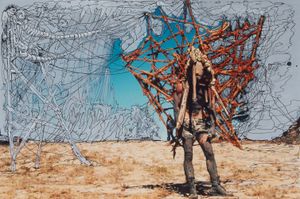 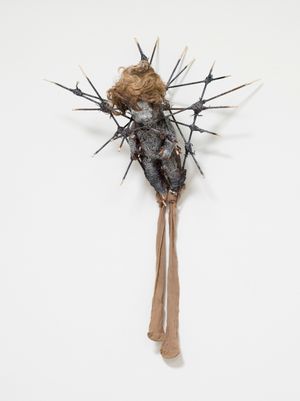 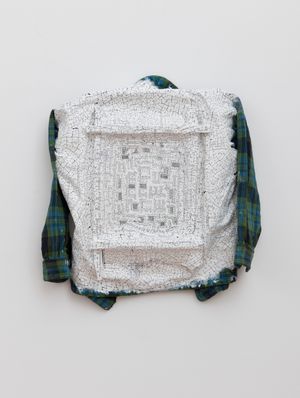 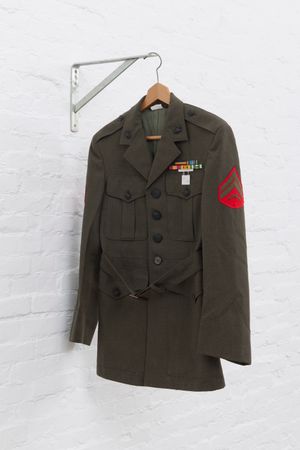 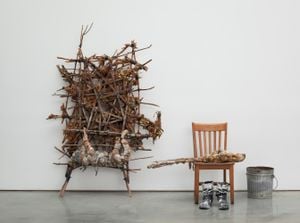 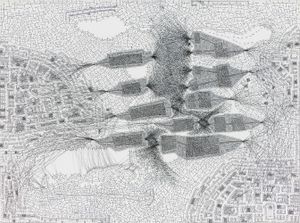 For more than five decades Kim Jones has been working on a consistent oeuvre of drawings, sculptures, installations and performances. Two moments in Jones' life profoundly inform the content of his works. At a young age he was diagnosed with a polio-like illness which confined him to a wheelchair. To combat the boredom he began to draw intensively. The drawings he made were inspired by the war games he played as a child and represented battlefields in which X's and dots attacked each other. These drawings would later take on an entirely different layer of meaning when Kim Jones returned from serving in the Vietnam War, which is the second event that would have an immense impact on his work.
In the mid-seventies, Kim Jones developed his alter ego 'Mudman'. At that time Los Angeles was the place where artists such as Paul McCarthy, Chris Burden, Barbara T. Smith and Allan Kaprow came together to organise exhibitions, live actions and performances. The body, civil-rights activism, sexual liberation and opposition to the war were prominent themes. As Mudman, Kim Jones wandered the streets of LA, taking in the beach, the subway and the art galleries. He was covered in mud and on his back he carried a construction made out of sticks, pieces of cloth and foam rubber. Jones turned his body into a living sculpture and in doing so brought art into the public space.

Given the ephemeral character of the medium, the photos that were made during his performances proved to be highly important documents. For Jones, however, the photographs are more than just documentation; he continues to draw and paint on the prints and as such creates autonomous works. Photographic pieces are often combined with fantastic figures and connected by association. The works Weather Control (1975–2007) and Untitled (1955–1999), part of this OVR, are examples of this practice. The drawings often have different dates because Jones continues to work on them over the years. Erasing, changing and transmuting forms and figures are typical of his drawing practice as is the horror vacui. Jones regularly seeks to connect with his own works by 'updating' them

One of his most important performances is the 'Wilshire Boulevard Walk' which took place in 1976. It was a project supported by the art organisation CARP, run by Marilyn Nix and Barbara Burden (former wife of Chris Burden). Kim Jones says the following about it in an interview with Robert Storr in 2015: 'It was twice, sunrise to sunset and then a week later, through the night sunset to sunrise; I walked eighteen miles with the structure, and the mud. All the way, each time, east to west from downtown LA, to Santa Monica, to the beach. It took twelve hours. It's like an art object making a line for eighteen miles. That's my definition of performance.' The wooden structure he was wearing on his back while walking, is titled Mudman Structure (large) and is part of our OVR Pioneers. In total there are only three of those performative structures left, of which Mudman Structure (large) is the most important one. In 1981 Kim Jones was invited at Artemisia Gallery in Chicago to be part of a group show together with Paul McCarthy and Rachel R. He had to cut the Mudman Structure (large) in half to fit the plane but put it together again afterwards. Until he found a studio, this structure was stored in the studio of Richard Serra for whom he used to occasionally work at that time.

In the past he has also created sculptures with plastic toys or dolls, as if recalling a trauma or enacting a ritual remembrance. The wooden structures evoke maps of oceanic currents and planetary movements, influenced by certain interfamiliar star charts. Untitled (doll) (2004–2011), included in our OVR, is a doll overcome by twigs, nylon pantyhose, cord, acrylic and ink. The external skeleton could be both understood as a support for the body, as well as a shell for protection, which is the case for the Mudman structures as well.

In 1983 PS1, now MoMA PS1, offered him a studio space. During his residency he started transforming his clothes, which were related to his time in the Marines or to his personal life, into sculptural works on which he drew. After adding layers of acrylic paint to prepare the surface, he draws a map with X's and dots. To him it feels like an act of improvisational writing. The artist is interested in the movement and changing positions, which he visualises by erasing certain parts and redoing them all over again. The works US Marine Jacket (1969–2011) and War Drawing Shirt (1982–2011) are later examples of this practice. At several exhibitions and biennials he created site-specific war drawings on walls, for example at the Venice Biennial in 2007, curated by Robert Storr.