With their rough edges and bold sections of colour that often make cartoonish human-like figures, Angus Gardner's colourful earthenware sculptures act as lively markers of social interactions while challenging the functionality of ceramics.

In No Half Stepping (2017), a sneaker-clad male in blue jeans and a bright red polo neck jumper stands with his leg out to the side while his arms—curved like thick wires or the handles of a vase—connect the upper and lower parts of his body. Utilising the aesthetics of both, the work oscillates between sculpture and vase. Occasionally Gardner's works appear more as functional wares until on closer inspection certain characteristics of the piece render it absurdly ineffective. For instance, in Tea For One (2018)—a chunky two-piece work comprised of a cup and teapot—the body of the cup slopes to the side, immediately negating its capacity to hold liquid.

The playful qualities of Gardner's ceramics not only subvert the question of functionality, but also the divide between 'high' and 'low' art. The artist's collaborative exhibition S-MILE with Lithuanian-born artist EGYBOY at Saint Cloche in Sydney (2016) was exemplary of this. Moving between street art, contemporary ceramics, painting and fashion, the artists created an installation that encompassed the entirety of the gallery, transferring the energy of the street onto the walls, floors and plinths.

Besides a playfulness of form, the wide gaping eyes and mouths of many of the figures appearing in Gardner's ceramics inject theatricality into the pieces. With each work rendered vastly different from the last, the multi-faceted nature of his ceramics provides a means to explore the different façades that we present throughout our lives—an aspect of human behaviour that is compounded by social media. The variations between one's public and private face were explored by Gardner in his 2017 solo exhibition Those Guys at Wellington St Projects in Sydney through a collection of ceramic works, each with its own exaggerated persona expressed through colour and form.

Angus Gardner's playful practice was further highlighted in a solo exhibition titled Climbing Trees in 2018 at Gallery 9 in Sydney. Once more, the artist explored human social behaviours and interactions through bright ceramic works and paintings. In earthenware work Dancing in the Tulips (2018), jagged grass encircles a pair of truncated legs in blue shorts that stand surrounded by rich yellow flowers. In Pink Boy with Arms (2018), an elongated, rosy-red face is adorned with round, childish eyes and a head of choppy brown hair while an angular arm juts out and attaches itself once more to the figure's temple.

Gardner graduated in 2014 with a Bachelor of Design from the College of Fine Arts, University of New South Wales. His work has been presented in a number of group exhibitions, including It ain't about how fast you get there at Tributary Projects, Canberra (2018); Absolutely at JDH Architects, Sydney (2017); and Slow Burn at Kudos Gallery, Sydney (2014).

Gardner lives and works in Sydney. 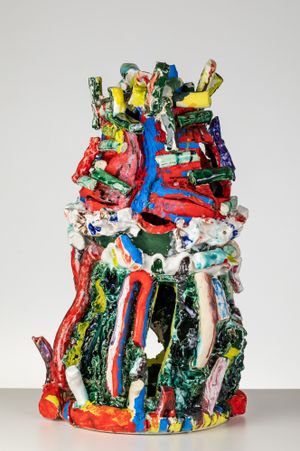 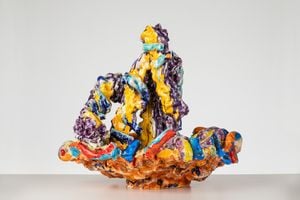 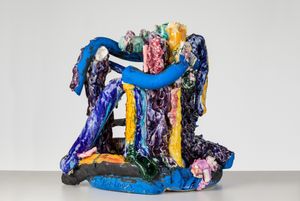 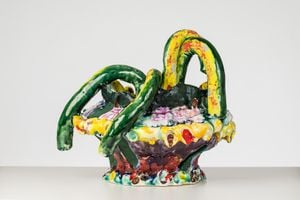 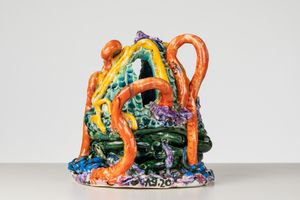 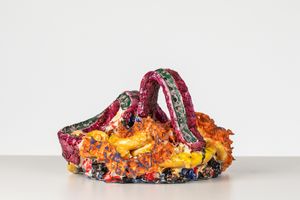 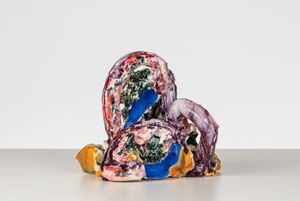 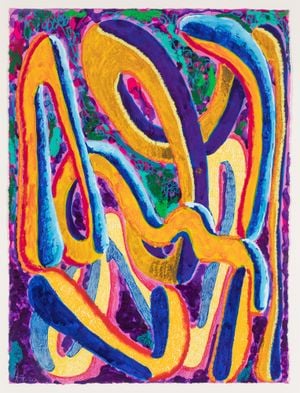 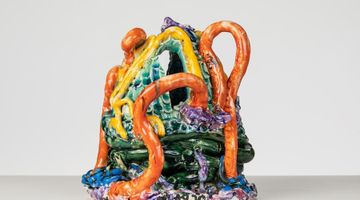 Be among the first to know when new artworks and exhibitions by Angus Gardner are added to Ocula.