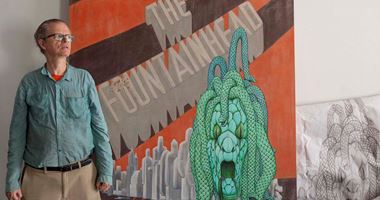 Ocula Conversation 'We'll see what the hell happens': Jim Shaw on Politics and Pop Culture in the U.S. Read More

Seemingly, Jim Shaw's imagination appears to know no bounds. He does not profess one single style or media, instead choosing to operate in naturalistic or Surrealist mode to produce paintings, photographs, sculptures, film, collages, posters, comic strips and installation. While the sources of his inspiration also seem limitless, certain patterns can be identified: comic books, rock albums, current and historical events, art history and fragments from his personal life as well as his friends and families'; and last but not least, the underbelly of American culture and history: consumerism, conspiracy theories, cults and homespun religions. For Shaw, objects and aspects of everyday life aptly reflect the shifting social and political values of American society. His works often reference on each other, engaged in a larger narrative that unfolds over a long period of time.

The investigation of American culture and history has become emblematic of Shaw's works. My Mirage (1986-91), his first major project and a series of 170 images, follows the story of a white middle-class male named Billy as he experiences life in America of the 1960s and 1970s. Sex and drugs are among the few thing Billy encounters, as is rock n' roll, before he falls to cult membership and rises again with the aid of organised religion. On a more personal scale, My Mirage draws on Shaw and his own friends' upbringing. In works such as King Cotton (2015), on the other hand, Shaw's insights are more historical and socio-political. The green mechanical elf spins gold from the cotton giant, a never-ending act that alludes to the repetition of history and questions the morality of pursuit for power and wealth.

In 2002, the Swiss Institute in New York presented The Goodman Image File and Study, which purported to show the works of the O-ist painter Adam O. Goodman. O-ism, according to the exhibition, was an American religion whose origins in the 1840s coincided with the spread of Mormonism. Both O-ism and Goodman were, on the contrary, Shaw's creation. Conceived as a satire of religious fanaticism, Shaw originally intended to employ O-ism to scrutinise the processes necessary in the invention and propagation of a religion. The project has, however, since become larger and more sophisticated–Shaw now considers the influences of its historical context, ranging from spiritualism, feminism, abolitionism and especially utopian communities across America. Subsequently, works such as The Whole: A Study in Oist Integrated Movement (2009), which depicts one of the rituals Shaw has created for his fictive religion, have materialised.

Shaw's work is diverse in media as well as in style. Dream Drawings (1992-1999) series, one of his iconic works, features pencil on paper drawings that feature surreal and yet naturalistic scenes in the style of comic stripes. In a 2015 interview with Ocula, Shaw explained that the uncanny drawings began with his own dreams and their 'occult way of telling ... in a satirical way or a symbolic way with things that are formally similar but not exactly the same'. Also operating in the comic book style is 'Blake/Boring series, ongoing since 2011, which combines the surreal, fantasy world of the 18th century poet and artist William Blake and the superhero comic style of Wayne Boring from the 1950s. Dream Object (1994-present) series ventures into another dimension altogether, often resulting in cartoonlike sculptures and images that border on grotesque.

Living in Los Angeles since his twenties, Shaw belongs to the generation of visionary artists who graduated from the California Institute of the Arts in the 1970s. He was particularly close with Mike Kelley, a fellow alumni of the University of Michigan and with whom he moved to Southern California. Upon completing his studies, Shaw worked in the film industry before gaining recognition in the mid-1980s. Since then, he has exhibited internationally including the US, UK, Europe and Hong Kong. In 2003, his work was included in The Encyclopedic Palace at the 55th Venice Biennale. The End is Here, a major retrospective of Shaw's work and his first comprehensive museum show in New York, was organised by New Museum in 2015.

It will likely take me months to digest all the lessons I've learned from The Met Breuer's newest exhibition, Everything Is Connected: Art and Conspiracy, so it's a good thing that the show stays op

As an artist, Jim Shaw is difficult to classify. Shaw’s practice includes painting, drawing, and sculpture as well as showing his prolific and ever-growing collection of found objects. (His 1991 show Thrift Store Paintings  was recently restaged for his recent New Museum survey in New York, The End Is Here.) In 1976 Shaw moved to...

Jim Shaw is the kind of artist who likes to collect. He started as a kid, with comic books and a library of Monsters magazine. As a teen, he progressed to records, where he refined his taste for the bizarre. One early score was "You're My Girl," a compilation of mood music and poetry delivered morosely by "Dragnet" star Jack...

Be among the first to know when new artworks and exhibitions by Jim Shaw are added to Ocula.
Sign Up Login