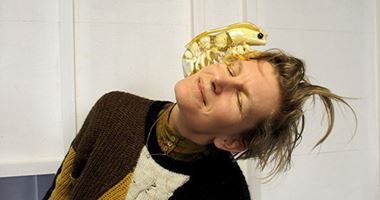 With a practice that encompasses painting, sculpture, performance and tapestry, French artist Laure Prouvost is perhaps most known for her immersive and non-linear film installations. Through an ongoing inquiry into language, Prouvost invites viewers into a world where boundaries are indefinite and reality and fantasy merge.

Translation—whether between languages or artistic mediums—and its resulting misunderstandings are recurring concerns in Prouvost's work. For instance, her seven-part film and installation work The Wanderer (2012) is an adaptation of British artist Rory Macbeth's 2009 German-English translation of Franz Kafka's The Metamorphosis (1915). Macbeth, who does not read German, translated the novella without a dictionary, resulting in a story that bears only the vaguest traces to its original. For The Wanderer, Prouvost first translated Macbeth's words into film, then film into sculpture in accompanying installations. One of the video's seven sequences was filmed in a London pub—an environment that the artist later recreated as an installation in the exhibition the wet wet wanderer (2017) at Witte de With Center for Contemporary Art in Rotterdam as a vodka bar with fountains spraying diluted ink, and white neon letters from Macbeth's translation written on the wall. Prouvost's version of the story also undergoes a process of mistranslation; Gregor Samsa, a travelling salesman in Kafka's story and a wanderer in Macbeth's, appears in The Wanderer as an alcoholic writer who writes with squid ink and works at an African hair salon.

In 2013, Prouvost was awarded the prestigious Turner Prize for Wantee, a film installation that demonstrates her flair for blurring the boundaries between fiction and reality. Originally created for the Schwitters in Britain exhibition at Tate (also 2013), Wantee derives its title from the German artist Kurt Schwitters' partner Edith Thomas, who had a habit of asking, 'Want tea?' In the video, the artist narrates the story of her grandparents in their English Lake District cottage. The film blurs fact and fiction as do many of Prouvost's works that include her grandparents; throughout her oeuvre, it remains ambiguous as to whether the two characters are real, semi-real or entirely fictitious. This film recalls, for example, how Prouvost's grandfather (who was apparently a friend of Schwitters and a less successful artist) dug a tunnel in order to get to Africa; one day, he disappeared down the hole, never to be seen again. In a recent interview with Ocula Magazine, Prouvost commented on the potential of fiction to strengthen reality: 'I was thinking...about whether or not fiction is an answer to reality. It kind of enhances reality or through art, this kind of emotional reality. It makes you question your own reality, so that your reality becomes fictional.'

For Prouvost, the same fictional narrative can be expanded and expressed in different ways. The apocryphal grandmother from Wantee, for instance, returns in Grandma's Dream (2013), a film montage that visualises her daydreams. Prouvost also attributes to the same character the sculpture Forward looking teapot by Grandma (2017)—a whimsical glass teapot with an extraordinarily long spout that curves like an elephant's nose.

Through her installations, Prouvost seeks to create environments in which her viewers may lose themselves, forming their own, individual interpretations of her work. Swallow (2013), for example—an immersive film installation shown at Whitechapel Gallery in London—particularly aims to attract the spectator by interlacing snippets of pleasurable images. Close-ups of a freshly plucked flower, birds, bathing women, ripe raspberries and the blue sky, among other images, construct a visually and aurally stimulating sequence. The narration, voiced by the artist, addresses the audience directly—'This image is undressing you... You drink this image...'—further encouraging and anticipating our consumption of the film.

The female body (or parts of it) is another recurrent theme in Prouvost's humorous, imaginary world. In collaboration with CHART Art Fair in 2017, the artist placed posters, billboards and banners depicting parts of the female nude—mostly breasts and bottoms—throughout Copenhagen. Paired with phrases such as 'We are coming out' and 'We are staring at you', the series displaced the voyeuristic or male gaze historically associated with female nudity in art. 'The Hidden Paintings Grandma Improved' (2017–ongoing) reimagines this series and similarly depicts parts of the female body set against a black backdrop, with their respective titles such as Pushing Forward and This Is Not A Minimalist Painting written in white capital letters. In her interview with Ocula Magazine, Prouvost revealed that the artworks are a result of her grandmother amending her late grandfather's paintings of breasts with text, a gesture that references the history of scarce attention given to female artists unlike their male counterparts.

Named after filmmaker Derek Jarman, the £10,000 prize goes to a UK-based artist working with moving images.

Multi-sensory additions at the Van Abbemuseum are aimed at those with visual and auditory impairments, and anyone else who wants to experience art differently.

The 58 th edition of the Venice Biennale, May You Live in Interesting Times curated by Ralph Rugoff–from London’s very own Hayward Gallery–proves to be as interesting as its title promises. Venice

Sign up to be notified when new artworks and exhibitions by Laure Prouvost are added to Ocula.
Sign UpLogin