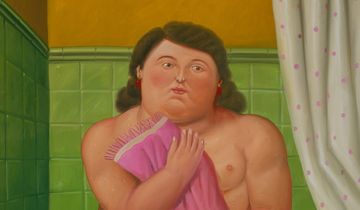 Fernando Botero Angulo is a Colombian painter, printmaker, and sculptor known for giving his subjects a thickset, very plump appearance. Twice participating in the Venice Biennale (in 1958 and 1992) Botero also represented his country at the 5th São Paulo Biennial in 1957.

This creator of 'inflatable' people was raised by an uncle in Medellin ever since his father died when he was four. He was surrounded by Baroque art in churches, and as a teenager he went to a school for matadors for two years, while also at a Jesuit secondary school. However when he was 16, Botero had some illustrations published by an influential newspaper.

After leaving school and briefly working as a set designer, he moved to Bogotá in 1951, where he had his first one-person show at Galeria Leo Matiz. At the time Botero was greatly influenced by Mexican muralists like Diego Rivera, Gabriel Orozco, and David Alfaro Siqueiros. An early example of Botero's work is Weeping Woman (1949).

The following year, with a group of artists, Botero went to Spain, visiting Barcelona and then Madrid. There, he studied at the Academia de San Fernando, and made a living selling copies of Franciso de Goya, Titian, and Diego Velázquez to tourists. Botero then had a second show in Bogotá, again with Matiz. After his return to Europe, he travelled extensively to Paris and Florence, studying the collections of important museums and learning Renaissance techniques.

Plump 'inflatable' figures are a hallmark of Fernando Botero's seminal style. Often assumed to be intended as comical or satirical, Botero insists his intuitive use of exaggerated proportions has more impact, creating more substance and overt sensuality.

In 1955, Botero returned to Bogotá, and then moved to Mexico City with a wife and child. In 1956, his Still Life with Mandolin created a stylistic breakthrough, revealing how to create a sensual mass that gave his subject matter presence and psychological weight. His bold distortion of 'normal' proportions, use of 'Latin American' bright colours and smooth texture-free skin surfaces became an identifiable style, now often called Boterismo.

He also experimented with a looser, more expressive style of paint application, featuring a textured surface with vertical brushmarks, and more monochromatic with less saturated colour. This is evident in El Nino de Vallecas (1959). He then went back to the more smooth and colourful painting technique.

In 1960, he moved to New York, creating many portraits of corpulent bourgeoise, with the inflatable stylistic connotations hinting at their excessive self-regard. An example is Presidential Family (1967). He also painted comical bordello scenes and pneumatic nudes, satirising their constantly fervent, unrelenting passion. In 1961, the Museum of Modern Art acquired Mona Lisa, Age Twelve (1959), an artwork in the more textured paint application style.

In 1973 Botero returned to Paris and began making huge bronze sculptures as well as paintings. These include Roman Soldier (1985), Maternity (1989), and The Left Hand (1992). Between 1975 and 1977 he stopped painting altogether to focus on sculpture.

When he restarted, he began to explore a wider range of subject matter. The work became darker. One series looked at the local narratives and criminal activities within recent Colombian history, referencing the well-known drug cartels in works like The Death of Pablo Escobar (1999). Botero has said, 'Art should be an oasis ... from the hardness of life. But the Colombian drama is so out of proportion that today you can't ignore the violence.'

Another series commented on another issue the artist is passionate about, the United States' torture of Iraqi prisoners in the notorious Abu Ghraib prison, as seen in Abu Ghraib (2005).

Fernando Botero has presented numerous monumental sculptures in public spaces across several major cities. That includes 25 enormous bronze works permanently donated to the artists home city of Medellin, along with other large scale works that have appeared on New York's Park Avenue, the Champs-Élysées in Paris, and in places across Monte Carlo, Barcelona and Madrid, among other cities.

Fernando Botero has been the subject of institutional group and solo exhibitions internationally.

Now in its fifth edition, Art Basel Hong Kong has become a firm annual fixture on the city’s cultural – and art collector’s – map. With almost 80,000 visitors and surprisingly robust sales reported on

You start believing so strongly in something and it produces a work of art that is different. I could not act with the convictions of others.