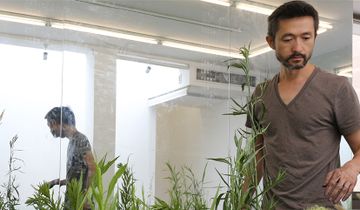 Hong Kong-based artist, writer, and teacher Zheng Bo looks beyond the human-centred and technologically focused modern world in his social, ecological, and community-focused art practice. Graduating with a BA in Computer Science and Fine Arts from Massachusetts' Amherst College in 1999, he later completed an MFA at the Chinese University of Hong Kong in 2005, and received a PhD in Visual and Cultural Studies from the University of Rochester in 2012. In his teaching—first at the China Academy of Art from 2010 to 2013 and currently at City University of Hong Kong—the artist focuses on exploring socially engaged art in contemporary China.

Zheng's practice frequently involves interventions that bring wild plants into art institutions and abandoned urban spaces. Inspired by Daoist thinking, his work centres around physically and conceptually re-engaging with nature. The counterbalancing of nature and technological modernity reflects the Daoist emphasis on a balanced ebb and flow between correlating entities. Typical of the artist's community-based art approach, his Plants Living in Shanghai (2013) project for the West Bund Architecture and Contemporary Art Biennale turned an abandoned Shanghai cement factory destined to become a plaza for concerts into a bustling community botanical garden. Working with the site's weeds as a starting point, the artist introduced local plant species and collaborated with local scholars of ecology, literature, Chinese medicine, and architecture to create an eight-week online course with weekly on-site activities. The catalyst for this environmental focus came from relocating in 2012 from his urban home city of Beijing to the comparatively green city of Hangzhou in Eastern China. The artist's use of weeds and plants stems from a personal fascination with marginality that draws parallels between society's marginalisation of nature and its marginalisation of certain people, such as migrant workers, queer persons, and those displaced by gentrification.

Born in Beijing in 1974, Zheng observed the uneven economic development of his country, where affluence rose alongside social, ecological, and environmental complications. This influenced early artworks such as Happy Meal (2004), which shows Filipino and Indonesian domestic workers telling jokes, highlighting marginalised cultural spheres in Hong Kong. Works containing slogans formed from plantings—such as You Are The 0.01% (2019) and té égalité fr (2017)—on the other hand, explore the marginalisation of non-human life on earth. Planted and left to grow outside the Overseas Chinese Town (OCT) East resort in Shenzhen, té égalité fr presents a fragment of the Liberté Egalité Fraternité mantra, pointing to the ecological crisis caused by humans failing to include other beings in that vision. The artist's focus on returning to a closer engagement with nature is a call to expand perceptions of human communities and publics, allowing greater interrelation and equality.

Zheng's artworks often explore both the ecological future of an area and its social and historical context. The artist's solo exhibition, Dao is in Weeds at Kyoto City University of Arts (KCUA) Art Gallery (1 June–15 July 2019) delves into the dramatic transformation of the urban area of Suujin in Japan. Traditionally the place of Burakumin (the 'untouchables' of society), this working-class neighbourhood has endured a steadily declining population. The project considers ways to move forward and repopulate the area; the artist invites participants to update the 1922 manifesto of the National Levellers Association's local branch, which called for equality across Japan, with regards to the next 100 years. In a 2019 conversation with Ocula Magazine, the artist stated that 'we need to move towards this direction of inclusivity and equality for all humans and non-humans.'

In contrast to works such as Dao is in the Weeds, the film series 'Pteridophilia' (2016–ongoing) is not bound to a location. The exploration of eco-queer theories—presented in intimate encounters between plants and young men in a forest in Taiwan, as well as the incorporation of plants into the practice of BDSM—easily travelled without loss of meaning from Manifesta 12 in Palermo (16 June–4 November 2018) to the 11th Taipei Biennial (17 November 2018–10 March 2019). For Manifesta 12 these video pieces were played on a small screen in a bamboo grove in Palermo's Orto Botanico. For the 11th Taipei Biennial, they featured on a large screen in a darkened room in Taiwan's Taipei Fine Arts Museum.

Read More Ocula News Biennale of Sydney Asks, What if Rivers Could Talk? Sydney, 13 April 2021 Fifty-nine participants have been named for the event, which takes inspiration from the legal personhood granted to rivers, parks, and mountains in recent years.