Sitting outside a Yangon restaurant—having first picked out a selection of dishes drenched in oil, Chinese canteen-style—I interviewed Myanmar artist Moe Satt. We had just come from his home studio, a sixth-floor walk up, on a visit in anticipation of the Hugo Boss Asia Art Award 2015, which was announced at the Rockbund Art Museum, Shanghai, on 26 November.

In its second edition, the 300,000 RMB prize was extended to include artists from Southeast Asia for the first time. Although the prize was ultimately awarded to Maria Taniguchi, Satt's nomination as a finalist has afforded an excellent opportunity to learn more about his practice, and consider the art scene in Myanmar.

Satt is primarily a performance artist, something he attributes to the inexpensiveness of the medium and Myanmar artists' (and activists') history with the form. It's also something he traces back to his youth. 'I drew all over my body as a child,' he says. 'I like dealing with the body.' 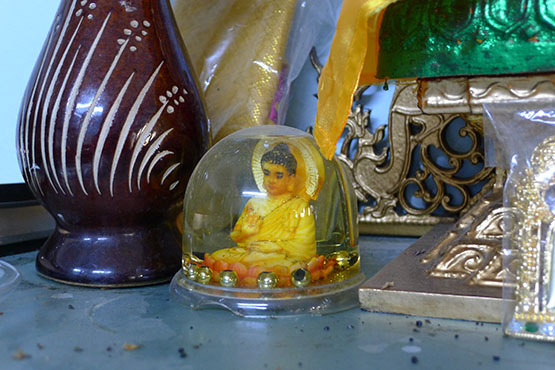 Many of his works, several of which are showing at the Rockbund through 3 January 2016, are analogous to Buddhist mudras, or meaningful hand gestures. They include the Face and Fingers (2008–09) photographs; wherein Satt invents and enumerates 108 different poses with names such as 'Gun' and 'Wave.' He also created a video Hands around in Yangon (2012), that closely examines peoples hands at profane, not sacred, work around the city, and Five Questions to the Society where I Live (2015), a silent language of hand signals for use in anticipation of the national election, won during the week of my visit by Aung San Suu Kyi's National League for Democracy.

In a country that has been controlled by a military junta since 1962, where freedom of expression has been severely curtailed, Satt's work is provocative. Fellow Burmese artist Maung Day says that in his works, instead of giving the finger, Moe Satt gives the whole hand. Satt himself points out that the name of his home city, Yangon, means 'finish the enemy,' an irony that triggers one of many broad grins and a creaky laugh.

Moe Satt, No Reason, from Face and Fingers.

SGWhy are hands such an integral part of your work?

MSWhen people are born, you take the baby with your hands. When they die, you close their eyes with the hands.

MSI don't think my work is very religious; I always deal with the social and political in my work. My work doesn't really look like Buddhist mudras. I want to make something new.

SGI guess if you want a new country it needs new gestures and new languages.

MSThat's the project I started in 2008, during a two month residency in Malaysia. I tried to find five to ten positions in the mirror each day. I then tried to find more transitions between positions. Moving my hands around the face—it's kind of a dance. Not really a dance but a sequence that's very smooth. In the performance I try to find 108 positions, which in Buddhism represents infinity. Buddhists often carry 108 beads.

SGYou're not a Buddhist yourself, but I noticed you have some small Buddhist statues in your home.

MSYeah, but these are not mine; they're my wife's. It's a traditional Buddhist shrine, and she's from a traditional Buddhist family. Sometimes she offers the god some rice, and I say why do you do that? He cannot eat! I'm hungry, I want to eat and she says no, no this is for the god, not for you. But I married you and you didn't prepare my food! You just prepared food for the god. Who is more important, the god or your husband?

SGArtistic expression has been controlled in Myanmar for decades. Now that things are opening up, what sort of institutional support is available?

MSWe have no art museums, few contemporary galleries and curators. There's no art council. I hope in the near future one will emerge. We need to ask the government to support artists. Most of my generation show [their work] in exhibitions outside the country, but some do show inside. We have really quite small galleries here. In Myanmar you can rent a gallery and make an exhibition. For that reason most exhibitions are not long, less than one week, maybe three days or five days. For performance art you don't really need a proper space. It can happen anywhere.

SGYou also curate shows and publish art writing. Is this something you love to do, or a necessity?

MSWhen foreign curators come to Myanmar they are only picking our senior artists, and my generation, we are not very well known so we have to promote ourselves. That's why I'm writing, making art works, and curating shows. I want to show my art works. There was a time when no curator chose my art works for exhibitions so that's why I make art shows with my friends.

SGWhere do you find support here?

MSI used to be part of the Gangaw Village Art Group, which is very important tor our art history. Founded in the 70s. This was especially important for contemporary artists. Gangaw is a kind of flower found all over Yangon University. That group came up from Yangon University.

Exhibition view of Five Questions to Society where I live by Moe Satt.

MSNo I didn't, because when I attended university it had already closed, yeah? I went to university outside of Yangon—at East of Yangon University. They closed down Yangon University because it was in the city centre, and around it was the engineering department, medical department and others, and for student demonstrations it was easy for them to gather there. At that time the government really was afraid, so they built a new university across the river. When the students demonstrated, the government could raise the bridge and prevent them coming into the city.

SGWhen was Yangon University shut down?

MSIn 1988, because 1988 was the big demonstration around Myanmar. After that, the socialist government fell down and then we had an election and the junta took over. It started with university students. One student from the engineering institute and another guy were fighting in a teashop. The one guy was playing with the other's cassette tape. The next day they were all put in the police station. The other guy's father was a leader in the region and so he was released early. The students were very angry about that. Why did you release them? Some students were badly injured in the head and really angry. When the police came, many students, the whole university gathered there.

SGDid you ever make any art works using cassette tapes?

MSI did one, a performance showing how to rewind and fast forward by spinning the tape on a pen.

SGSo many of us from outside Myanmar don't know much of its history and culture. How do you create art that reaches both foreigners and local Burmese?

MSIf they don't know the context of Myanmar it's very difficult to appreciate my artwork. They need to know a little bit. But artists aren't really meant to be understood always, yeah? Sometimes you just see it. If you really need to understand, it's better not to make art—just say what you mean. If they want to know it, then they can learn it. We like Latin music, but we don't know the language. We just feel it.

SGIn what ways are you a Burmese artist?

MSI have had the chance to live in other countries, but I figure even if I'm in jail, I'm living in jail in my own country. It's much better. I always use my traditional dress in my artwork. Some people are really angry about me wearing traditional clothes and doing strange things, like I'm ruining our national identity. I say I have a right to do whatever I like. You have no right to tell me what to do, or tell me what Myanmar identity is. If you wear longyi is that Myanmar identity?

SGIt can't just be a pair of pants, otherwise every other tourist who comes to Myanmar would be Burmese. At the Rockbund, you're showing an installation of 15 large, traditional umbrellas torn and then zipped back up. By zipping and unzipping the zips, audiences can change the forms in the installation. But as umbrellas, aren't they now completely useless?

MSI tried to create a beautiful thing from a useless thing. And I wanted to ask, can these things be saved or not? We all say that our society is kind of a broken society. Can we fix it or not because everything is really broken. We need to take time to visit that. —[O] 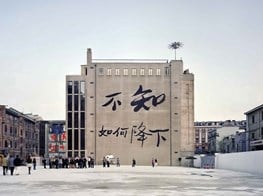