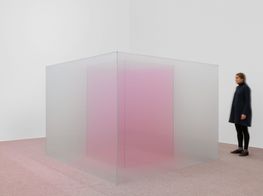 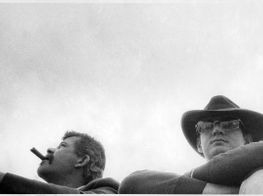 In 2016, artist Larry Bell gave a talk in the Swire Properties Lounge at Art Basel in Hong Kong, where he described his work as a 'spontaneous improvisation'.

It is a surprising description when thinking about the work he is best known for: slick glass cube works including Pacific Red (2016), which comprises three large-scale reflective glass cubes and was exhibited in Hong Kong over the fair week, and Pacific Red II (2017), which consists of six laminated glass cubes installed more recently as part of this year's Whitney Biennial. It is because of these types of glass sculptures, which reflect the artist's obsession with right angles and the manipulation of light, that he has been positioned within both the Minimalist and the American West Coast-originated Light and Space movements. However, Bell is quick to note that he never intended to be part of any movement, describing his practice as being more concerned with exploring the sensuousness of the hand, above anything else. Considering the artist's output over his 60-year career, it does become apparent that underlying his work is a deep fascination with both the self-contained and relational possibilities of hands-on material experimentation.

Bell currently lives and works in Taos, New Mexico and keeps a studio in Venice, California. Now 77 years old, he exudes a type of 'Californian cool': polite and friendly, with a relaxed demeanour, his hat slouched low. From 1957 to 1959, he studied at the Chouinard Art Institute in Los Angeles where his tutors included Robert Irwin, and friends included Ed Ruscha and Kenny Price. During his studies, Bell's work leaned heavily towards Abstract Expressionism, often consisting of abstract, monochrome and geometric paintings that increasingly alluded to, or represented, three-dimensional form. In 1959, he introduced fragments of glass to his canvases, until his work eventually evolved into purely glass constructions. These glass experiments were the starting point for Bell's later cubes and panel wall sculptures for which he is now become so well known.

By 1963, Bell's preoccupation with glass led him to create cube sculptures using a technique of vacuum deposition, whereby thin films were added to clear glass, resulting in the appearance of light being presented as a sculptural object. From 1968 to 1969, he continued to exploit the transparency and reflectivity of his chosen material, creating large-scale pieces that explored the possibilities of right angles and resulted in the 'Standard Walls' series, based on the practical limits of Bell's body (the width of his arm span, the height he can jump, and only as heavy as is practicable to lift). These freestanding glass walls can be arranged in an infinite number of configurations, allowing for endless possibilities of engagement between object, space and body. In these works, as is the case with much of Bell's work, the viewer becomes an integral component.

However, to focus only on Bell's glass works would be to ignore the breadth of the artist's oeuvre. His experimentation with paper and light, and the development of various series make it apparent that the artist has been driven by a disciplined curiosity. Bell began his 'Vapor Drawings' in 1978: an ongoing series which extended from much of the earlier exploration he had done with glass. Drawing on the notion of spontaneity and improvisation in this series, he explored the outcomes of applying different coats of vaporised metal to paper. In the early 1980s, Bell also began experimenting with different surfaces—such as Mylar and laminate film—to create his 'Mirage' works, yielding a multitude of effects and a vibrant spectrum of colours. From the 'Mirage' series, Bell developed the 'Fractions' series, a large body of small works which in many ways hark back to his early Abstract Expressionist interests, albeit created using the technology he had been exploring in the intervening years. These comprise three by three inch gestural images, which he creates using a laminate press whereby heat and pressure loosen deposits of paint and thin film coating that were previously applied to discarded pieces of his 'Mirage' works. The series points to the way in which Bell's practice can be summed up as representing the outcomes of over 60 years of accumulated knowledge gleaned from creative experimentation with the possibilities of light and matter.

In this interview, Bell acknowledges that fact that what he produces is evidence of his working process, but leaves it to others to decide if his work is art when discussing his practice.

SB: Your early work was formed within the tradition of Abstract Expressionist painting. Can you recall the moment you moved away from the canvas? What encouraged the break?

The imagery of the paint on the canvas became more organised until it was very hard-edged. When it was hard enough, it became sculptural and left the wall.

SB: Have you maintained a relationship to painting at all?

I guess that everything we do at any time—in our studio or in our studies—has a lasting effect on the way we think and continue to organise our thoughts. I consider my work to be evidence of my studies and the externalisation of a current thought. It is also about intuition, improvisation and spontaneity; these elements all impact the final result.

AD: In a talk during Art Basel in Hong Kong in 2016, you used the word 'improbable' to describe the creation of your work. Could you expand on this?

I have to sum it up by saying that by engaging the improbable, one creates credible tension.

AD: Another reference you have made in relation to your work is to note its relationship to literary influences.

Well actually, my favourite author is H G Wells. He wrote some extraordinary things. I relate to a lot of his characters and named some of my sculpture projects after some of the central characters in his books, because I was so moved by the strength of their conviction in who they were. Griffin is a central character in Wells' novel The Invisible Man [1897]; he is a student at something called the Normal School of Science in London, and is very interested in the properties of light. He has a theory that it is possible to make a person disappear by a certain kind of re-alignment of molecules. He is not only made fun of by his fellow students, but also discouraged by his professors. He comes up with this formula before he tries it on himself. He also tries it on his landlady's cat and the cat becomes invisible except for the pupils of his eyes—there are these two eyes walking around. What Griffin did was not only heroic because of his faith in his ability to do this thing, but also because no matter the resistance to it, he proceeded and in fact made himself invisible.

In a way, I related to Griffin as an artist: you make this commitment to do something. You spend all your money and all your energy on trying to develop something and even if it works, then possibly nobody will be interested in it. It could be that you are successful, but you might feel you failed.

It was this connection to these characters that made me interested in Wells.

AD: Is it Wells' characters you relate to more than Wells himself?

It is Wells too. He published all these phenomenal books—The War of the Worlds [1953] and The Invisible Man—but when Wells was young, he actually started out as a journalist. He was asked about how he made the transition from journalist to successful novelist almost overnight. What Wells said back to the guy affected me profoundly: he said he thought it was better to make a series of striking—if unfinished—novels and so escape from journalism, rather than be forgotten while he elaborated a masterpiece.

AD: How does this translate into how you work?

All Wells wanted to do was write, get the stuff out and not worry about anything else. He trusted his work.

I repeat myself a great deal in the studio; it's a bit like practising ballet. The evidence and outcome are different, but the activity to get there is often the same. I like finding a work routine that is sensuous.

AD: What do you mean by 'sensuous'?

I want it to be intuitive. It is about the feeling of doing the work. I am addicted to the 'hands-on' sensuousness of the studio activities; I am addicted to making things. I don't want to think too much about it. I am the guy who cranks it out for other people to decide if it is art or not.

AD: Your work has so much to do with exploring materials for their effects. Are there any materials out there right now that particularly interest you?

SB: You are considered one of the leading figures of the Light and Space movement, and you famously studied with Robert Irwin—among others—who is also considered a central figure in this movement. Could you talk about your relationship with Light and Space?

I have been accused of being part of the Light and Space movement and part of the Minimalist movement. I have never tried to be part of any movement.

Robert Irwin is the most charismatic person I have ever met. He was and is a great teacher. He has always followed his work!

SB: Could you talk about your relationship with what you identify as the most common shape in civilised culture, the right angle?

The right angle is the most common element in civilised culture. My sculptural interests were affected by this element; it is everywhere all the time at once! It is in our peripheral vision constantly. It is a dynamic, constant influence on us and how we think. If anything, the right angle celebrates its impact on me as proven by the evidence of my studio activities.

SB: You have said that one of the greatest lessons you have learned through your work is to trust yourself. How might you describe this trust?

One has to believe in themselves at least enough to function through the day. Some of us suffer from depression which makes trust more difficult. Some of us have no place to go and some of us are too comfortable. Whatever the 'place' some will do it and some will not? I enjoy the work I do. I look forward to every day's discoveries. The work is the teacher.

SB: What advice might you give an artist working today in terms of achieving a level of self-assurance when it comes to their work?

AD: Is there a dream project for you?

The dream is to work until you die. The rest of it will take care of itself. —[O]

Larry Bell is an American sculptor and painter whose impressive body of work can be viewed across a single developmental arc of improvisation, experimentation and impulse. In an interview with Ocula, the artist said: 'I consider my work to be