Everything began in Stuttgart in September 1974 when Max Hetzler opened the Hetzler+Keller gallery. The eclectic young gallery was in search of its own identity and showed works by Hanne Darboven, Rebecca Horn, Mario Merz, David Rabinowitch, Klaus Rinke, Ulrich Rückriem and others. When Kasper König, then a freelance curator, brought the works of Donald Judd and Richard Long to Germany in his exhibitions, Hetzler showed them in Stuttgart in his gallery or in a non-profit space nearby.

With his mentor, the art dealer Hans-Jürgen Müller, their colleague Ursula Schurr, and the support of the Grässlin family, Max Hetzler organised the exhibition europa 79, with a growing awareness of their profession and a desire to highlight not only the commercial but the intellectual role of the galleries alongside the then flourishing art institutions.

Over the next few years a program was established, in 1981 finding its collective expression in an exhibition whose title again did not understate the ambition: Junge Kunst aus Westdeutschland (Young Art from West Germany). Among the artists were Werner Büttner, Günther Förg, Martin Kippenberger, Reinhard Mucha, Albert Oehlen and his brother Markus.

In 1983, the Galerie moved to Cologne. The ten years spent in Cologne were decisive and established Galerie Max Hetzler on the international scene. A little group soon formed around certain of the artists seen in Junge Kunst aus Westdeutschland (Büttner, Förg, Kippenberger, Mucha, Oehlen), to whom we should add Georg Herold, Meuser and Hubert Kiecol, among others. The Rhineland institutions followed these artists; the Museum Folkwang, Essen, notably gave home to the legendary exhibition Wahrheit ist Arbeit (Truth is Work) by Werner Büttner, Martin Kippenberger and Albert Oehlen in 1984. In 1987, Thomas Struth exhibited his cityscape photographs at the gallery, marking the start of a strong collaboration that has lasted more than twenty-five years since.

A particular connection was established between Cologne and New York. In the eighties, Galerie Max Hetzler presented the work of four American artists of considerable importance: Jeff Koons, Christopher Wool, Robert Gober and Cady Noland. In 1989, Hetzler went into partnership with Luhring Augustine to open a space at Santa Monica in California. He continued to work regularly with two of the most important American contemporary artists: Christopher Wool, who had his first solo exhibition at the gallery in 1989, showing word paintings among others, and Jeff Koons—everyone in Cologne remembers his exceptional exhibitions Banality of 1988 as well as Made in Heaven in 1991.

The nomadism typifying Max Hetzler’s career now struck again. The early nineties saw the art market struggling, and in Germany things were changing after the reunification. In 1993, Max Hetzler decided to move to a city full of potential: Berlin. In addition to a first Berlin gallery in Schillerstrasse in Charlottenburg, inaugurated in 1994 with a permanent installation by Gerhard Merz, in 1995 he set up shop right beside Checkpoint Charlie, in a building in Zimmerstrasse that was to remain his principal exhibition space until 2009. In 2006, Galerie Max Hetzler opened a space in a former light bulb factory, Osram-Höfe in Wedding. At the end of 2013 Max Hetzler left the gallery space in Berlin-Wedding and opened two new spaces in Berlin-Charlottenburg.

In Berlin, we have seen exhibitions with Merlin Carpenter, Sarah Morris, Ellen Gallagher, Arturo Herrera, Kara Walker, more recently Monica Bonvicini among others. Over the next few years, Samia and Max had determining encounters with those (native and adoptive) Londoners, Darren Almond, Glenn Brown, Michael Raedecker, Bridget Riley, Rebecca Warren and Toby Ziegler.  Artists such as André Butzer, Rineke Dijkstra, Mona Hatoum, Vera Lutter, Marepe, Beatriz Milhazes, Ernesto Neto, Frank Nitsche, Yves Oppenheim, Richard Phillips joined the gallery. One searches in vain for a specialty, direction, or a school. Instead, what one sees is artists from different backgrounds and generations, freely gravitating around this context and forming a kind of nebula.

Remember Everything, The ‘forty years’ exhibition held in 2013 crystallises a precise instant, but the adventure of Galerie Max Hetzler is by no means at an end. Recently, Navid Nuur, Robert Holyhead, Edmund de Waal and Jeff Elrod joined the gallery, which thus reaffirms its Berlin profile: a mixture of generations and horizons.

In May 2014, the gallery opened a new space in Paris, with an exhibition of Albert Oehlen, thirty-three years after his first exhibition at Galerie Max Hetzler.

The gallery's story continues in London, where it inaugurated a new space in November 2018 with an exhibition of early paintings by André Butzer. Situated in the heart of Mayfair, a historic district for the arts, the London space enables Galerie Max Hetzler to continue its longstanding commitment to exhibiting the work of contemporary artists across generations.

Most recently, the gallery has launched a third space in Berlin-Charlottenburg, in the former home of pioneering German avant-garde art dealer Alfred Flechtheim (1878-1937). A street level gallery, in a magnificent art nouveau building, the new gallery is located at Bleibtreustraße 15/16, and opened its doors in May 2020. 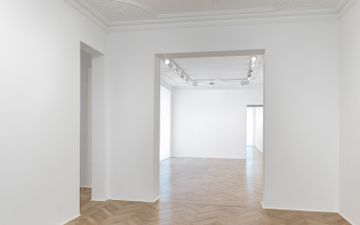 Sculptures and Works on Paper

Read More Ocula News Who Are the Nominees for the Marcel Duchamp Prize 2022? Paris, 18 January 2022

Among the four shortlisted artists are a self-described alchemist and a 21st-century exponent of Op art.

The artist is finally receiving the recognition she deserves.

A conversation about Duchamp, Michael Jackson, the allure of the Renaissance in the age of Instagram, and more. In the debut episode of David Zwirner’s new podcast, world-renowned artist Jeff Koons t

The Stedelijk Museum Amsterdam presents a major survey of the work of German artist Günther Förg (1952–2013). 'A Fragile Beauty' explores the work of a rebellious artist whose oeuvre embodies a criti

'Sunflowers are something I feel very intensely. They look so wonderful when they are young and they are so very moving when they are dying.’ – Joan Mitchell Florence Derieux, Director of Exhibitions