The Donald Judd Foundation has announced a switch in its sole representation from David Zwirner to Gagosian, marking another major shift in artist transfer between the mega galleries. ⁠⁠

In the announcement, Judd's son and Artistic Director of the Judd Foundation explained, 'We have been getting busier and bigger and it was time to make a change,' while Larry Gagosian added, 'It is impossible to consider the history of American art without Donald Judd. He is one of the first artists whose work I really admired'.⁠⁠

The legacy of the sculptor's work has moved from strength to strength in recent years. In 2020, for instance, there were ten solo exhibitions dedicated to the artist in the United States, including an acclaimed retrospective at MoMA, curated by Ann Tempkin.⁠⁠

Reviewing the exhibition in The New York Times, Holland Cotter mused, 'His art once thought to be too severe to be beautiful (or maybe to be art at all) can now be seen to offer pleasures, visual and conceptual, that any audience with open eyes, can relate to.'⁠⁠ 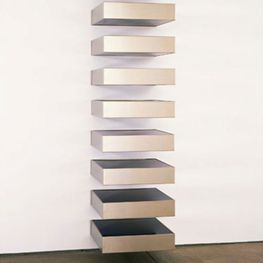