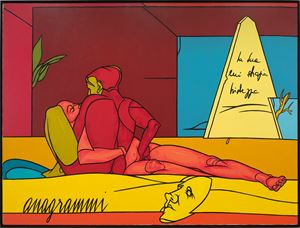 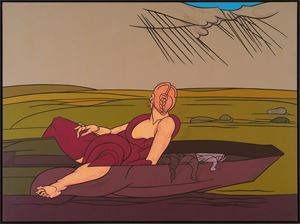 'Therein lies all the mystery and magic of painting, of creating a myth, the conflict between temporal and timeless.'

Born in 1935, Valerio Adami has been adding to the history of modern art for over 60 years.

On 7 September 2019, Galerie Templon will be paying tribute to the artist in its 30 Rue Beaubourg space with a dozen of his paintings from the 1980s.

Valerio Adami, a remarkably precocious artist, trained in the traditional style of neo-classical drawing at the Brera Academy before a life-changing encounter at the tender age of 16: Oscar Kokoschka, whose Prometheus he discovered at the Venice Biennale, taught him the psychological dimension and intellectual power of painting. A keen traveller, Adami left Italy in 1955 and moved between London, Paris, New York, building a dazzling career which, as early as 1964, earned him the honour of featuring in the Kassel Documenta and a first retrospective of his work in 1970 at the Musée d'Art Moderne de la Ville de Paris. Reflecting his enjoyment of the company of poets and writers (such as Italo Calvino, Jacques Derrida, Michel Deguy, Carlos Fuentes, Edouard Glissant, Jean-Luc Nancy and Antonio Tabucchi), he keeps a journal of aphorisms where he notes down his thoughts about the structure of his drawings and paintings, since his work is the fruit of a subtle analysis combining knowledge, memory and emotions.

True to its mission to contribute to the evolving history of art by forging bonds between generations and artistic territories, Galerie Templon has been supporting the artist's work since 2004. For the past 15 years, it has featured his drawings, paintings and another original aspect of his work, his photography from the 1960s.

By exhibiting a curated selection of pieces from the 1980s, the gallery is shedding new light on a time that saw the artist flourish and find his singular and unique style. This period of the artist's career was marked by numerous public commissions and exhibitions. This is when he created the stained-glass windows for the Hôtel de Ville in Vitry and the murals at the Théâtre du Châtelet then Gare d'Austerlitz. He was Invited by Dominique Bozo to the Pompidou Centre in Paris for a solo exhibition curated by Alfred Pacquement. It was also the period when Valerio Adami freed himself from contemporary diktats and delved into the East, particularly India, which he visited on three occasions. However, like many other great painters of his generation, such as Francesco Clemente and Georg Baselitz, his craft is firmly rooted in the classic western tradition he belongs to, using it as the departure point for his creation of timeless, deeply modern work.

Born in 1935 in Bologna (Italy), Valerio Adami lives in Paris and Meina (Italy).

He began exhibiting his work internationally in 1958, including at Documenta III in Germany (1964), the Jewish Museum in New York (1968), Musée d'Art Moderne de la Ville de Paris (1970), Centre Georges Pompidou in Paris (1985) and Tel Aviv Museum in Israel (1996). He took part in the major exhibition on Narrative Figuration at the Grand Palais in Paris in 2008 and exhibited at the Boca Raton Museum of Art in Florida in 2010. A major retrospective of his work was held in 2015 to mark his 80th birthday, traveling from Turin to Mantua then Perpignan. 2016 saw the Vienna Secession exhibit his early drawings, his oils on canvas on show at the Chapelle Saint-Sauveur in Saint-Malo, and the Transfigurations exhibition at the Musée de l'Hospice de Saint Roch in Issoudun. The Musée Jean Cocteau in Menton held a major retrospective of his work in 2018.

Sign up to be among the first to know when new exhibitions by Valerio Adami or at Templon open.
Sign UpLogin