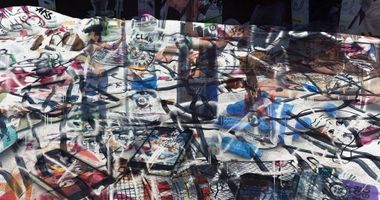 Reflecting on the status of images in an increasingly digital world, New York-based artist Avery Singer is known for using 3D modelling software as a tool to create self-reflexive airbrushed paintings.

A Painter's Life and Career

Born in New York into a family of artists in 1987, Avery Singer studied at the Städelschule, Frankfurt am Main in 2008, and graduated with a BFA from Cooper Union, New York in 2010.

While she experimented with sculpture and other mediums in school, Avery Singer did not begin painting seriously until after graduation. Interested in the ways technology erases evidence of the artist's hand, she began making black-and-white airbrush paintings while experimenting with the 3D modelling software SketchUp.

Avery Singer's early paintings use geometric figures arranged in fictional scenes to satirize stereotypical notions of 'the artist'. Her first solo exhibition, The Artists (2013) at Kraupa-Tuskany Zeidler, contained a series of paintings mocking contemporary art clichés; in the large-scale black-and-white work The Studio Visit (2012), for example, two Cubist-looking figures are seated on the opposite sides of a table with a background of artworks, performing a rigid studio visit. Similarly, the 2013 painting Performance Artist (2013) suggest artists staging a bizarre performance to an absent audience.

The Artist was met with an influx of critical and curatorial interest, and Singer's subsequent rise to art-world fame was rapid. In 2019, her work was presented in the 58th Venice Biennale. The large-scale painting—entitled Self-portrait (summer 2018) (2018)—depicted Singer standing in front of a foggy glass, referencing a classic genre of Venus or bathers. In the background of the painting is a collage satirizing the proposal of, as the artist describes it, an 'open-air toilet pavilion' as a public park in New York. Also in 2019, Singer mounted a large-scale site-specific mural commission Schultze Projects #2 (2019) at Museum Ludwig in Cologne, Germany.

The artist's first solo exhibition with the gallery opens in New York.

Read More
Advisory Pick Who Are the Top Young Artists at Auction in 2021?⁠⁠

The first half of 2021 has seen great results at auction for young emerging stars with five artists—born after 1980—bringing in over $5M each at auction. ⁠⁠

Sign up to be notified when new artworks and exhibitions by Avery Singer are added to Ocula.
Sign UpLogin