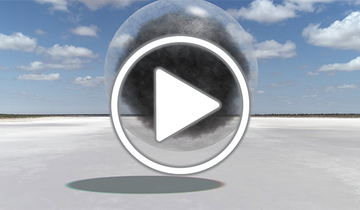 As a fact-based discipline, science (and in particular, astronomy, electromagnetic energy and radio waves) is a frequent point of departure for Grasso, who deals with its more disturbing connotations. His 2009 installation Haarp at the Palais de Tokyo in Paris, for example, was inspired by the antennas at an American military research base in Alaska, which some believe were erected to control both the climate and population. Consisting of 18 recreated antennas linked by black cables in the Paris gallery space, the density of transmission apparatuses—usually seen spread out across a vast area—resulted in an atmosphere of pointed unease.

Indeed, Grasso approaches his artworks like a film director, taking into account the minute details of his exhibitions, down to the sounds and sensations in the room. This cinematic sensibility comes as no surprise, given the artist's dedication to moving image. One of Grasso's best-known films, titled Élysée, centres around the aesthetics of power; in 2015, granted rare access to the office of the President of the French Republic at the Élysée Palace in Paris, Grasso made a hypnotic, slow-moving portrait of the room, focusing on the golden, gilded details: piles of paperwork and pens in the office where major decisions are made on behalf of the nation. Set to a soundtrack by Nicolas Godin and produced at a time of deep political uncertainty in Europe, the film examines the iconography of authority and the inanimate phenomena that stands in for political might.

Grasso was similarly concerned with the visualisation of authority in the film Soleil Double (2014). Recorded in EUR—a city district of the south of Rome that was developed in the 1930s for the 1942 Worlds Fair and intended as an homage to the 20th anniversary of Fascism—the film shows two suns shining over a plaza that includes both buildings in the style of the 1930s and more contemporary structures. Ominous and otherworldly, the two suns in the sky seem to foreshadow an immense natural disaster while destabilising the representation of truth and the trustworthiness of the author.

As a city loaded with historical connotations, Rome is rife with inspiration for Grasso. Also set there is his 2008 video Les Oiseaux (The Birds), which depicts a flock of starlings flying above the Vatican at dusk. Isolated in the frame, the undulating flock resembles an ionic particle field at the whim of imperceptible magnetic waves. Set too in the Vatican, the silver bromide prints in Grasso's 2014 'Specola Vaticana' series present historical photographs of the pope looking through a telescope—an unusual synthesis of science and spirituality, and a nod to the link between astronomical understanding and power.

With the same focus on the sky, Grasso's massive outdoor light installation SolarWind (2016) is based on storms in outer space. Projected onto the walls of enormous silos in Paris' 13th district, the permanent work translates real-time cosmic flows and solar activity into poetic, flowing and multi-coloured hues. Other public installations include Nomiya (2009–2011), a movable restaurant on the roof of the Palais de Tokyo; and Anechoic Pavilion, a minimalist, one-room cabin that was designed as a place to meditate and installed atop a Hong Kong ferry pier in 2012.

A highly skilled draftsman, Grasso is also known to paint in historical styles using antiquated materials such as animal adhesive. The series 'Studies into the Past' (2009–ongoing) saw him create Renaissance-style paintings in his own hand, mixing boiled oil with his pigments so that the works would become dimmer when exposed to light—therefore 'ageing' the images and making them look more genuine.

A winner of the Marcel Duchamp Prize (2008), Grasso studied at the Ecole nationale supérieure des Beaux-Arts, Paris; The Cooper Union for the Advancement of Science and Art, New York; Central Saint Martins, London; and Le Fresnoy, Tourcoing. He currently lives and works in Paris.

Read More Ocula Feature The scene of a crime: Shanghai art week 2016 By Elliat Albrecht, Shanghai Frankly though, I couldn't concentrate: a trade fair seemed trivial as social and political progress seemed on the brink of a steep and painful descent.