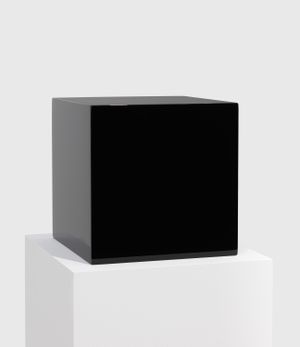 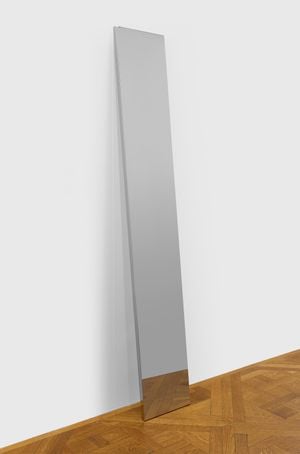 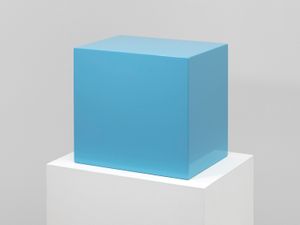 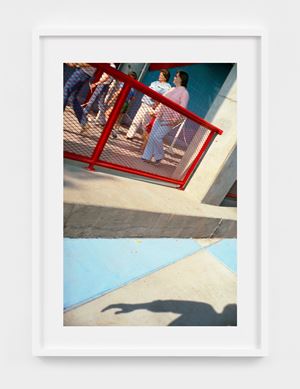 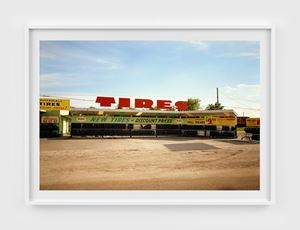 David Zwirner is pleased to present an exhibition of works by William Eggleston and John McCracken—the first time these two iconic American artists have been featured together. On view at the gallery's East 69th Street location in New York, True Stories places Eggleston and McCracken into dialogue around their expressive use of colour and light, and their distinct versions of American vernacular culture.

Born within five years of one another—McCracken in Berkeley, California, in 1934, and Eggleston in Memphis, Tennessee, in 1939—both artists came of age outside of the dominant centres of the art world, internalising the spaces and light of the American West and South. Working in sculpture and photography, respectively, each would go on to break with the practices of their contemporaries and challenge the traditional boundaries of their media in search of a new form of expression.

Though both artists occupy singular positions within the recent history of American art, they find common ground in their sharp formal sensibilities and distinctive eye for colour. McCracken is known for his work that melds the restrained formal qualities of minimalist sculpture with a unique West Coast sensibility expressed through colour, form, and finish. For McCracken, colour was an integral element of his practice, and he considered similar or even identical forms executed in differing hues to be entirely individuated artworks that engage with their surroundings in a distinct way.

Considered the father of modern colour photography, Eggleston elevated the medium to the art form that it is recognised as today. Eggleston's novel pictorial style deftly combines vernacular subject matter with an innate and sophisticated understanding of colour, form, and composition. Like McCracken, Eggleston recognized the psychological charge of colour and his skilled use of it, along with his democratic and indiscriminate lens, would set him apart from his contemporaries.

Both Eggleston and McCracken privileged a way of making art that championed an open relationship to their viewers. Through their own unique visions, both artists eschew fixed meaning, emphasising the subjective experience of the viewer and granting us access to a private world in which we might recognize a wider one. While formally reductive in their simplified geometric shapes, McCracken's luminous surfaces are emblematic of a distinctive West Coast approach to minimalism. Unlike his East Coast contemporaries, who considered their own reductive forms to be entirely nonreferential and self-contained, McCracken thought of his work more expansively and in relation to the subjective experience of each viewer and often referred to them as 'structural essences of the man-made world.'1 As art historian and curator Robin Clark notes, 'In addition to likening them to humans, McCracken described his slotted sculptures prosaically as "two-sided, front and back. Like people, buildings, houses, cabinets, refrigerators, ovens, hi-fi, electrical components, cars & trucks, safes, heaters, display cases etc.," and more succinctly as "mystery containers."'2

Similarly, Eggleston sought to turn the ordinary into the distinctive, capturing the landscape and character of the American South in Kodachrome colours through a technical approach and visual style more often associated with the evolving snapshot aesthetic of contemporary street photography than the formalist practices of traditional fine art photographers. His images of storefronts, restaurants, homes, cars, and people of the cities, towns, and settings to which he travelled expose an architecture of surfaces in postwar America, while revealing the breadth and individuality of everyday life in often overlooked locations. As Thomas Weski notes, 'Eggleston's photographs connect apparent intimacy with the accessibility of the snapshot. At the same time they preclude a quick and unambiguous interpretation owing to their strange or unfamiliar perspective, the detail chosen, and the subjective control of colour: each picture evokes, opens up, different associations for every observer.'3

When considered together, these works reveal synchronicities between their unique visions: McCracken's pedestal works and planks can be likened to everyday objects while Eggleston's photographs convey pure colour and form. Found within McCracken's imbued spirituality and Eggleston's embrace of the spiritual banal are stories of the American psyche, from the heroic to the mundane.

With a career spanning over fifty years, William Eggleston (b. 1939) continues to hold a significant influence on contemporary photography and visual culture at large. His 1976 solo exhibition at The Museum of Modern Art, New York, curated by John Szarkowski, marked one of the first presentations of colour photography at the museum. The show and its accompanying catalogue, William Eggleston's Guide, heralded an important moment in the medium's acceptance within the art-historical canon, and it solidified the artist's position as one of its foremost practitioners to this date.

Important solo presentations of Eggleston's work have been held at the Corcoran Gallery of Art, Washington, DC, in 1990; Barbican Art Gallery, London, in 1992 (travelled to Louisiana Museum of Modern Art, Humlebæk, Denmark; Museum Folkwang, Essen; and Fotomuseum Winterthur); documenta IX, Kassel, in 2002; and Museum Ludwig, Cologne, in 2003 (travelled to Museu Serralves, Porto; Nasjonalmuseet–Museet for samtidskunst, Oslo; Louisiana Museum of Modern Art, Humlebæk, Denmark; San Francisco Museum of Modern Art; Albertina, Vienna; and Dallas Museum of Art). In 2008, a major career-spanning survey, William Eggleston: Democratic Camera, Photographs and Video, 1961–2008, was organised by the Whitney Museum of American Art in New York and Haus der Kunst in Munich; it subsequently travelled to the Corcoran Gallery of Art, Washington, DC; Art Institute of Chicago; and the Los Angeles County Museum of Art, among other institutions.

Eggleston received a National Endowment for the Arts Fellowship in 1975 and has been the recipient of numerous notable awards, including the International Center of Photography Infinity Award for Lifetime Achievement (2004) and the Chevalier de l'Ordre des Arts et des Lettres, Ministère de la Culture et de la Communication, République Française (Order of Arts and Letters of the French Republic) (2016), among others. The Aperture Foundation honored Eggleston in October 2016. Work by the artist is held in major international museum collections.

John McCracken (1934–2011) developed his early sculptural work while studying painting at the California College of Arts and Crafts in Oakland in the late 1950s and early 1960s. While experimenting with increasingly three-dimensional canvases, the artist began to produce objects made with industrial materials, including plywood, sprayed lacquer, and pigmented resin, creating the highly reflective, smooth surfaces for which he was to become known. In 1966, McCracken generated his signature sculptural form: the plank, a narrow, monochromatic, rectangular board format that leans at an angle against the wall (the site of painting), while simultaneously entering into the three-dimensional realm and physical space of the viewer.

Beginning in the 1960s, McCracken exhibited steadily in the United States and abroad, and his early work was included in groundbreaking exhibitions such as Primary Structures at The Jewish Museum, New York (1966), and American Sculpture of the Sixties at the Los Angeles County Museum of Art (1967). In 1986, the major survey Heroic Stance: The Sculpture of John McCracken 1965–1986 was organised by P.S.1 Contemporary Art Center, Long Island City, New York, and travelled to the Newport Harbor Art Museum (now the Orange County Museum of Art), Newport Beach, California; Fine Arts Gallery, University of California, Irvine; and the Contemporary Arts Museum Houston, Texas. In 2011, his work was the subject of a large-scale retrospective at Castello di Rivoli, Turin. Other significant solo shows include those hosted by the Hochschule für Angewandte Kunst, Vienna (1995); Kunsthalle Basel (1995); Stedelijk Museum voor Actuele Kunst, Ghent (2004); Inverleith House, Royal Botanic Garden Edinburgh (2009); and the Henry Moore Institute, Leeds, England (2012).

McCracken joined David Zwirner in 1997. During his lifetime, the artist had seven solo exhibitions with the gallery in New York, including Sculpture (1997), Stainless Steel Sculptures (2000­), Early Sculpture (2005), and New Works in Bronze and Steel (2010), among others. In 2013, Works from 1963–2011, which was on view at the West 20th Street location in New York, marked the gallery's most comprehensive presentation to date of the artist's work. In 2017, David Zwirner presented a solo exhibition in New York of key examples from three discrete groups of McCracken's work: leaning multipart wall pieces, wall-mounted multipart reliefs, and freestanding columns.

Sign up to be among the first to know when new exhibitions by William Eggleston, John McCracken or at David Zwirner open.
Sign Up