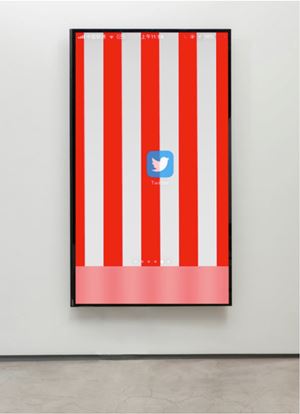 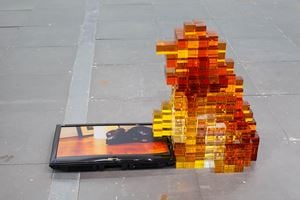 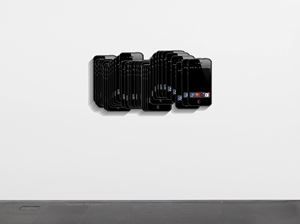 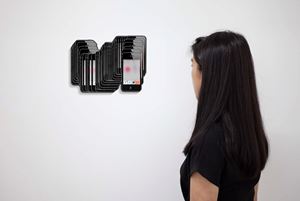 de Sarthe is pleased to present its third solo exhibition for the Beijing-based contemporary artist Liang Ban, titled, Pearl Rolling Across the Floor, featuring a new series of video works as well as sculptural and photographic installations.

Liang Ban believes that in the current era mobile devices have evolved to become a "possessive technology" that has taken control of its users. In the same way that ships, planes, and cars influenced architecture in the early 20th century, the artist captures how mobile devices have influenced modern humanity. In the video works _Caged Bird (2019) and_On a Slow Boat to China (2019), the artist reenacts idioms using the icons of smartphone applications. Titled after Maya Angelou's novel I Know Why the Caged Bird Sings, Liang Ban's Caged Bird depicts the social media platform Twitter's famed icon of a bird attempting to escape its screen. The bird flutters across a field of red and white stripes, only to discover that its effort has been in vain. While red and white stripes are associated with certain flags, the artist likens its banded pattern to a cage. On a Slow Boat to China, conversely, shows an icon of a man in a boat, slowly struggling across the screen but never reaching its destination – a depiction its titular saying which is used as a metaphor for a long, unending journey.

Visually resembling a virus stricken computer, Stutter (2020) is a body of artwork that depicts an array of smartphones overlapping one another, with the word "fuck" written on the home screen using app icons. Referencing the frustrating yet familiar errors of antiquated computer systems, the work compares lagging windows to stuttering, and stuttering to the self-suppression of speech, a consequence of living in a collectivist society.

Sharing a title with the exhibition, the multimedia installation _Pearl Rolling Across the Floor _(2020) consists Chinese guardian lions either sitting atop a digital screen, or resting one of its legs on top of it. Constructed using crystal clear blocks, the lions appear as clear and pure as glass. Yet, its material is ironically the same as that of counterfeit treasures produced by corrupted manufacturers in Southern China. The invention of glass is historically important. It was imported into China from the west early on, but was overlooked and rarely utilized as a construction material. China's historical tendency to steer away from glass seemingly speaks to the transparency of the Chinese political framework. By recreating stone lions using a transparent material, the artist undermines the traditional conception that "the lion is a symbol of power and status". The digital screens, on which the lions sit, display video fragments of a person periodically flipping through printed images of interior floors. As the reader turns the page, the distant sound of a pearl rolling across the floor plays in the background.

The weight of the floor is lifted by the lightness of the pages, the solidity of the lion is deconstructed by the transparency of its building blocks, and the two are connected by the lack of visual presence of the pearl. From the artist's perspective, pearls represent fragile individual entities and simultaneously are symbolic of Hong Kong, a city reputed as the "Pearl of the Orient."

Pearl Rolling Across the Floor

Sign up to be among the first to know when new exhibitions by Liang Ban or at de Sarthe open.