LogoutLogin
My OculaSign Up
Gagosian
Follow
All Locations  |  Select Location

'Each of us is a cacophony of experience. Not just a seamless self.'

In his collage-like composite portraits derived from sources both personal and found, Nathaniel Mary Quinn probes the relationship between visual memory and perception. Fragments of images taken from online searches, fashion magazines, and family photographs come together to form hybrid faces and figures that are at once neo-Dada and adamantly realist, evoking the intimacy and intensity of a face-to-face encounter with an alien other.

Collecting imagery that he tears, cuts, and overlaps on the walls of his studio, Quinn uses oil paint, charcoal, gouache, oil stick, and pastels to render facial features and details from the found images, covering parts of the canvas as he goes. He employs the stream-of-consciousness tactics of Dada, as in the chimerical, masklike collages of Hannah Höch, together with a visceral realism reminiscent of Romare Bearden, whose deft photomontages made palpable the feelings, spaces, music, and energies of Black experience during the Civil Rights era and after. By adapting the medium of collage and translating it into cohesive two-dimensionality, Quinn suggests that multiplicity is a perennial rather than fleeting state. 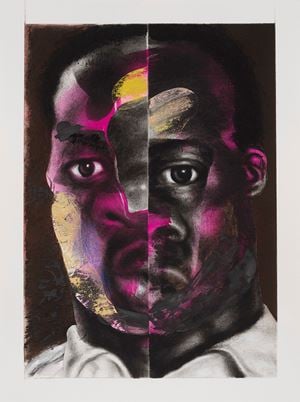 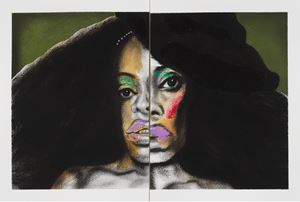 "I paint forms as I think them, not as I see them," Picasso said. Nathaniel Mary Quinn, the forty-one-year-old New York artist, paints people as he feels them, not as they look.

It's hard to forget the portraits of Nathaniel Mary Quinn. Looking into the fragmented, kaleidoscopic faces, the features seem startlingly familiar—an old friend, a neighbor, or perhaps someone you sa