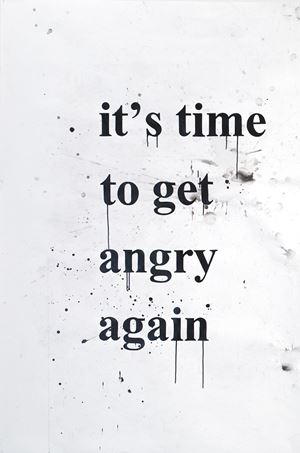 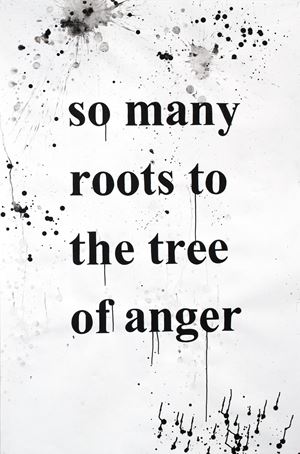 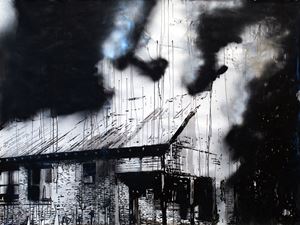 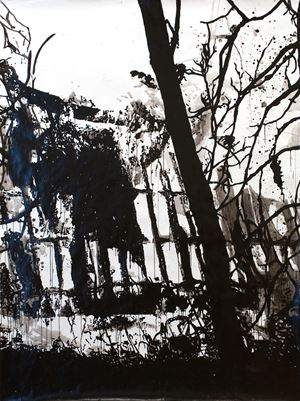 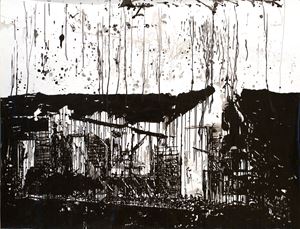 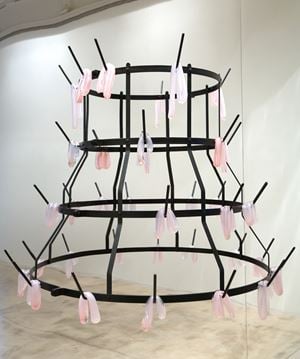 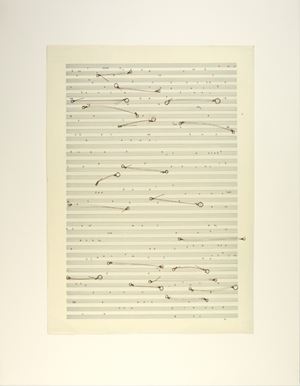 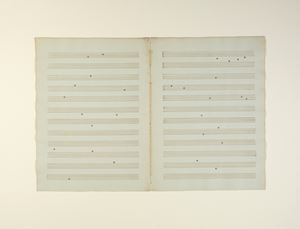 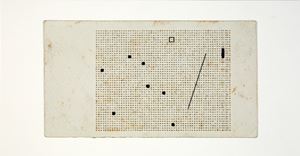 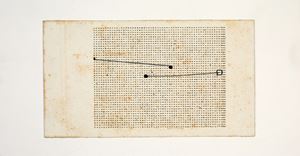 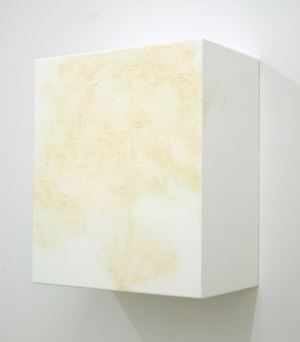 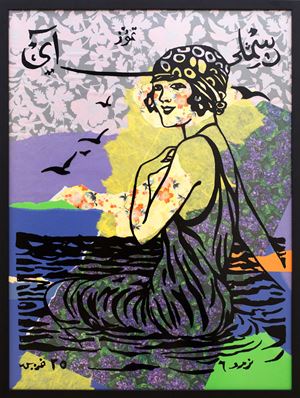 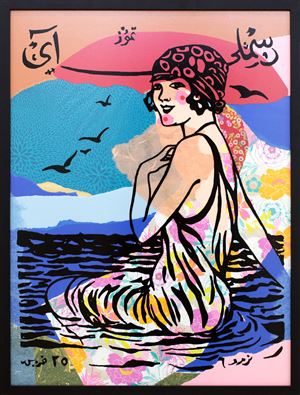 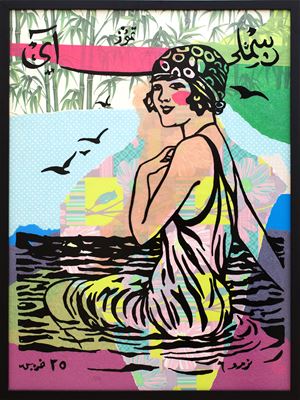 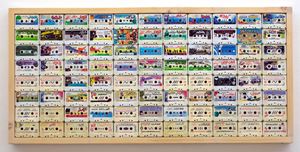 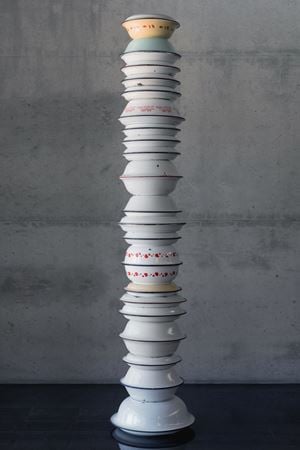 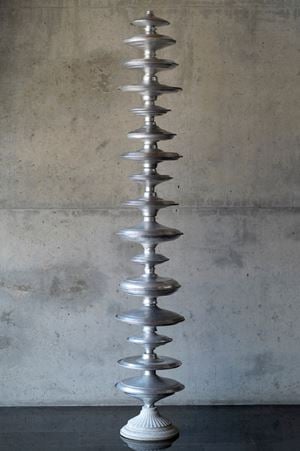 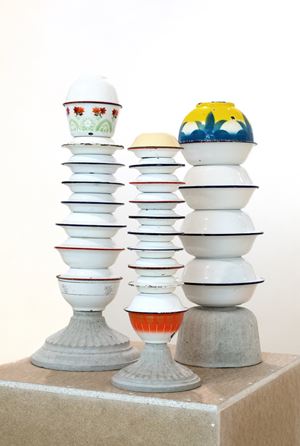 With the exhibition To a passer-by Galerie Krinzinger wants to present an overview of international female artists the gallery has represented and exhibited since many years: Marina Abramovic (since 1975), Monica Bonvicini (since 2019), Johanna Calle (be 2013), Angela de la Cruz (since 1997), Gülsün Karamustafa (since 2016), Maha Malluh (since 2012), and Mithu Sen (since 2009).

The gallery was always known for representing about fifty percent female artists within the program—as early as in 1975, with Frauen Kunst-Neue Tendenzen one of the first exhibitions exclusively showing female artists with the participation of Marina Abramović, Jole de Freitas, Valie Export, Natalia Lach- Lachowcz, Gina Pane, Carolee Schneemann, Katharina Sieverding etc. For To a passer-by, only the international artists of the gallery were chosen, as the Austrian artists (Martha Jungwirth, Brigitte Kowanz, Ulrike Lienbacher, Rosmarie Lukasser, Anja Ronacher, Eva Schlegel etc.) have been strongly represented in major shows in the recent years.

The exhibition is supposed to be a serious status quo in collaboration with the artists, who all have selected certain works for this show. In decision to add a curators point of view we could win Eva Maria Stadler and Ursula Pokorny for the project, they formulated this short text and the title of the exhibition.

We think we have to understand the moment we live in. If we try to describe it, we remember what we experienced or imagine what might await us in the future. In this sense the moment can only be grasped in terms of the past or what is yet to come. It is the transitory, fugitive that cannot be stopped, the one Baudelaire falls in love with in just a glance. The modernity has a fondness for the fleetingness and the sensation of the moment therefore it seems difficult to commit, but at the same time the crisis and consequently a decision is inscribed in the moment.

In Marina Abramovic's Transitory Objects displayed in the exhibition the observer is asked to touch the crystal on the wall with their forehead or chest, while standing still. The entire concentration rests in the body's position in relation to the object. It is a state of void that gets taken out of the movement of time. Abramović is thinking the autonomy radically from the self. She is challenging the boundaries of the controllable and the consciousness to separate the body from the surrounding and to keep it in its own repetition. Once the observer leaves this position she once again joins the flow of time in which the moment is permeated by its past and future through the repetitive motion. Recourse is made to experience and this is then aligned with the idea of something future. These repetitions of memory constitute the structure of time.

Johanna Calle's works trace the movements of time and its experience. The artist makes use of antique print techniques by means of which she creates grid structures and then modifies them. The tedious manual process lends immediacy to the material. Thus one's own sense of being interwoven with time is reconstructed and the moment becomes tangible in the repetitions resulting from the procedure.

Memory is the repetition of a moment and in this sense it is subjective. In its representation the subjective is brought in alignment with social ideas, that is, conventional forms that enable us to communicate what is experienced. As a result of the constant repetitions the forms create common, shared experiences that always remain latent ideas, since we cannot be sure of what is real.

In times of dramatic upheavals, the forms of memory, too, become fragile. In the last decade Saudi Arabia has experienced rapid modernisation, accompanied by a strong acceleration of cultural developments. In the 'Food for Thought' series Maha Malluh is dealing with the fact how this situation formed and influenced society. She is collecting audiotapes that were widely handed out to spread messages. Maha Malluh places them in bread baking trays, just like the bowls that were used for preparing food they stand for forms of living together. With the modernisation those items are vanishing continually, Maha Malluh reassembles them to objects for the present moment. She refers to the common in the memories and is pointing out how influential they are for social norms.

The societal is usually located in historical and political events that are constantly being repeated as shared memories. Gülsün Karamustafa reveals aspects related to the modernisation projects realised under Atatürk period in Turkey and brings them to bear on her own biographical experiences. In emancipatory gestures she explores how general ideas are conveyed in the subjective. The on-going repetitions of history in the continuum of time seem to develop without any human intervention, seemingly automatically, until they cause a rupture.

This is how modernism envisages the end of painting and finds a continuation by transcending it. Angela de la Cruz develops a form out of this rupture—a form that seeks relation of the general to the subjective and develops a body within her practice of painting. Wrinkled Bare (Yellow) is reminding Angela de la Cruz of simple cloths that are hanging from windows, functioning as curtains and therefore become a fragile border between the private and public space. This is also pointing out the present political discourses, that try to develop a subjectivity and identity in terms of ways of partition like nationalism or segregation, that are proving as highly unstable in reality.

Subjective memory means finding a position in the uncertainty of time and the desire for what is to come. Mithu Sen's drawings are excerpts from stories about bodies and subjective desire. The figures are overlapping; the boundaries between the objects are not clear. The stories reveal ruptures of the bodies and their wishes but also social ideas. They are part of constant changes and transformations in the movements of time. In the recognition of subjectivity as a necessity for finding a position in the uncertainty of a rupture it is easy to succumb to a relative and individual idea of time in which everyone develops her own moment. But subjectivity in particular can only be understood in conjunction with the idea of society.

Monica Bonvicini's works challenge us to take position in the consequences of political decision-making. The black and white images of natural catastrophes and quotes of different female writers are expressing the anger about the supremacy of power and money in the capitalocene. Bonvicini is showing the strength of resistance as a feminist gesture. There is a new sculpture that it satirising Marcel Duchamp's Bottle Dryer hanging on the mirrored wall. We find ourselves reflected in a mesh of subjective desire and being involved in social processes. We cannot distance ourselves through our own memories and ideas of the future. There is the possibility to make the decision to grasp the moment as a form based on the subjective position within society. That means to settle for the moment and not to get lost as a passer-by in the fleetingness of time.

16 new artworks have recently been added by Galerie Krinzinger.
Sign up now to be among the first to know when new artworks are added.
Sign UpLogin