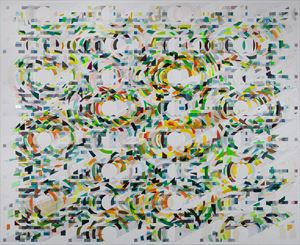 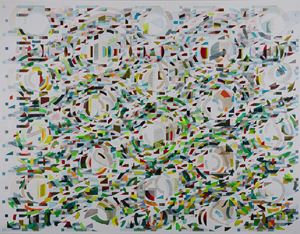 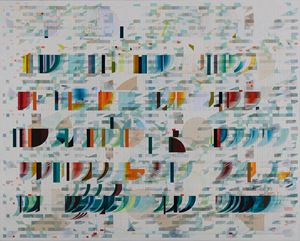 Tanya Goel's art is characterised by antagonisms: in her work, control and intuition, rigour and freedom, research and spirituality, structure and chaos encounter each other. This oscillation between extremes has an inherent magic of its own and is particularly distinct in the paintings by this young artist. Born in 1985 in New Delhi, Goel left India to study art in the United States. After spending a decade abroad, she returned to the city of her birth. In her artistic practice, Goel weaves together her experiences of two different systems of cultural references to shape a creative universe that is uniquely her own. In it, an important role is played by the theme of the city and its urban structure in particular.

Her paintings–some of which are in large formats–are based on a grid structure that the artist pencils onto the canvas. The grid as a motif refers to the modernist utopia in several ways. Indeed, the topic of the city as a place for new utopias was articulated most especially in nineteenth- and twentieth-century architecture, and even more particularly in the Indian cities that sprung up during the colonial era and afterward. But more on this later. The layout of these cities is defined by the concept of the grid. At the same time, it is also characteristic of various modern art movements. For instance, the work of Josef Albers (1888–1976) belongs in this context, and Tanya Goel explicitly refers to it in her work.

Just as a city is a multi-layered entity, Tanya Goel's paintings also consist of different levels, both material and conceptual. The layers she places on top of the grid structure depict colourful, geometrical forms. Even these fragmentary, spatially shifting patterns refer to the city. They dissolve the strict grid by adding dynamism to the painting through the interplay of empty space and colour. This new layer reflects the intensive, continuing research the artist conducts when she is, for example, on her way from her home in New Delhi to her studio, which lies just outside the Indian metropolis. She travels regularly to other Indian cities as well.

On her journeys she notes the striking changes that have occurred during her absence or are still ongoing. A great deal of public housing has been torn down to make way for private projects, forcing poorer residents to leave the city. These upheavals in the urban fabric can be traced back to India's checkered history. Although the buildings from the colonial and post-colonial eras are of great architectural quality, they also reflect the failure of modernist utopianism. Foreign architects (including famous ones such as Le Corbusier and Louis Kahn) were called upon during the era of government overseen by the Indian Prime Minister Jawaharlal Nehru. Still, the urban and demographic developments of the past decades led to an imbalance between private and public spaces.

On her excursions and trips through the city the artist regularly gathers fragments of these ruins, thus allowing references to history into her work. Along with the photographic documentation of buildings decaying and vanishing, the pieces of debris she finds are incorporated into her extensive archive, which forms the basis for further artistic work. On the one hand, she makes sculptures out of them, and on the other hand, she uses these objects to manufacture her own pigments.

Colour is a theme that is of central importance in the artist's work. 'Colour is light, material, and surface,' says Goel in conversation. 'It is both fact and fiction.' She researches these multiple aspects from a theoretical as well as a practical standpoint. This culminates in, for example, a study of Goethe's colour theories. Goel is also interested in the history and significance of paint pigments in India. Coming from a textile-manufacturing family, she is particularly sensitive to this theme. She often uses fragments of fabric in her paintings, because they absorb light in a different way than pigment does. On a very practical level, this kind of research results in scientific lab work, in which she takes the urban gems she has found and grinds them into powder to make her own pigments. In turn, these are later mixed with cement, lending the colours a certain kind of plasticity, while at the same time creating a material sense of proximity to their urban origins. All of this makes Tanya Goel's paintings akin to physical urban landscapes in which viewers can immerse themselves.

A dialogue with the local context of the artist's home country also takes place when viewing her sculptures. Most of the building fragments still bear traces of faded colours, while new layers of colour are added to them. The geometrical shapes of these coloured planes respond to the form of each fragment. In this way Goel creates a sense of tension between the found object and her artistic intervention. Placing the painted blocks on elevated metal pedestals produces an immediate physical encounter at eye level. The pedestals come from textile factories that were forced to close in recent years. In these works, too, diverse realities meet and turn into a new, symbolic object. Historical and economic references overlap with the institutional museum practice of display. The self-referential gesture is typical of Goel's reflective practice of art.

The artist's work method is characterised by the simultaneous presence of spontaneous interventions and calculated systems of order. Goel deliberately plays with the ambiguity this creates, which is strongly tied to the diametrically opposed poles of body and mind, as well as spirituality and science. In the gestural formal repetition, the intuitive movement of her body enters into a dialogue with the strict order of the algorithmic grid. The paintings thus created weave together a wide network of references to both international art—such as Hilma af Klint or Russian constructivism—and to local art, such as Indian miniature painting or tantric art. The amalgamation of these different worlds resembles an alchemical process.

Tanya Goel was born in New Delhi in 1985 and studied at the Faculty of Fine Arts, MS University, Baroda, India and the School of the Art Institute of Chicago, USA before receiving her Master's degree in Fine Arts from Yale University in 2010. She had a solo exhibition with Nature Morte in New Delhi (2017) as well as two solo exhibitions with Gallery Mirchandani + Steinruecke in Mumbai (2011 and 2015). Her works are in the collections of the Kiran Nadar Museum of Art, New Delhi, Philadelphia Museum of Art, Philadelphia, PA, the Art Gallery of Alberta, Canada, and UBS Bank, Zurich. In 2018, she participated in the Sydney and Gwangju biennials.

Equations in a Variable 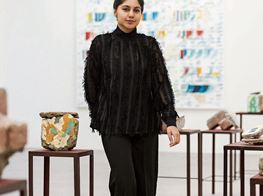 Sign up to be among the first to know when new exhibitions by Tanya Goel or at Galerie Urs Meile open.