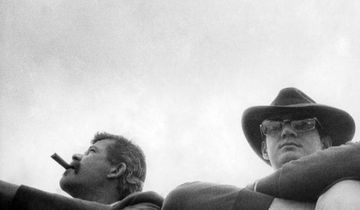 American artist John Chamberlain earned the title of three-dimensional Abstract Expressionist partly due to his well-known sculptures made of crushed car steel. However, his practice is perhaps better defined by an attentiveness to the formal qualities of the vast range of two- and three-dimensional media he utilised across his long, productive career.

Born in 1927 in Rochester, Indiana, John Chamberlain saw many regions of the world while serving in the Navy during World War II—an experience that would influence his approach to perspective and scale later on. Upon his return to the United States, the artist began studies at the School of the Art Institute of Chicago, finishing them at the renowned Black Mountain College of North Carolina.

John Chamberlain arrived in New York in 1956. The following year, while visiting his friend the artist Larry Rivers in Southampton, New York, Chamberlain came across a 1929 Ford Pie Wagon in Rivers' back yard. He removed the car's fenders and ran over them with his own car, then twisted the fenders and used steel rods to weld them. The resultant work, Shortstop (1957), was the artist's first sculpture using car parts.

In the early 1960s John Chamberlain focused his practice on collages in a range of materials, including cardboard, pigment, and scrap metal, all layered on acoustic tiles pulled from the ceiling of his studio. Later in the decade, he began a range of investigation in various other industrial materials, including urethane foam, coated Plexiglas, and galvanised steel.

In works such as Untitled (1966), Chamberlain used cord to contort urethane foam forms into a range shapes. The foam appears to almost exhale as it stretches beyond its bindings, emphasising a simultaneous sense of restriction and release. The artist moved to Los Angeles in 1970, and rededicated himself to metal shortly thereafter.

Though best known for his sculptures, Chamberlain experimented across a vast range of media, creating paintings, prints, and masks, amongst other works. He also produced films, including The Secret Life of Hernando Cortez (1968): an improvised and experimental historical piece starring the Taylor Mead and Ultra Violet of Andy Warhol Factory fame.

John Chamberlain continued to add a range of innovative approaches to his practice during the final decade of his life. Starting in 2007 he revisited the small, fragile models he had executed in aluminium foil in the 1980s and enlarged them into a series of outdoor sculptures. The works, such as FROSTYDICKFANTASY (2008), combine the delicacy of the original models with the monumentality of up to 15 feet of industrial aluminium.

John Chamberlain presented his artworks at major institutions during his life, including The Museum of Modern Art, New York (1960); Los Angeles County Museum of Art (1971); Whitney Museum of American Art, New York (1993); and Kunst Museum Winterthur, Switzerland (2005). His work is featured in prominent collections including those of the Art Institute of Chicago; Moderna Museet, Stockholm; and the Stedelijk Museum Amsterdam.

John Chamberlain died in 2011, leaving behind an extensive and multifaceted body of artwork. He garnered significant recognition during his lifetime, receiving the Skowhegan Medal for Sculpture in 1993, amongst other awards. His art remains on display at Dia:Beacon, New York, and various other locations.

The two artists explored form, colour, and materiality together.

They sounded like an odd pairing when the announcement arrived: Eva Hesse and John Chamberlain, featured in the exhibitions, Forms Larger and Bolder: EVA HESSE DRAWINGS and _John Chamberlain Baby Ty

An idiosyncratic show combining the work of two geniuses who used metal in new if nearly opposite ways needs to be carefully balanced. Displaying 12 crushed car-body sculptures by the American sculptor John Chamberlain in and around two prefab structures by the French architect-designer Jean Prouvé doesn’t quite do the trick.