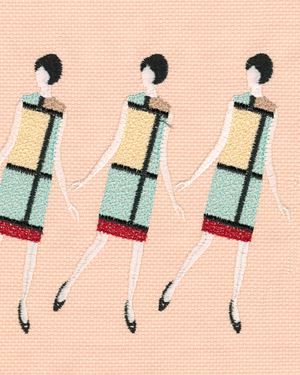 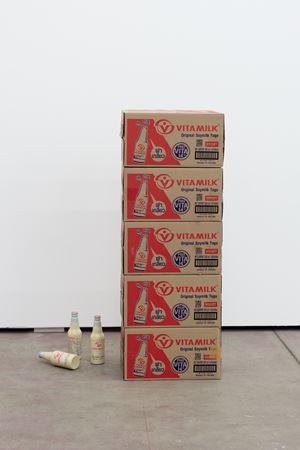 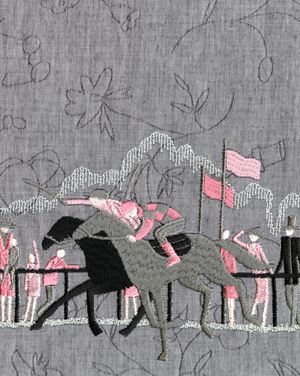 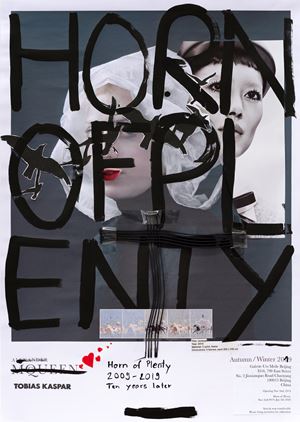 Galerie Urs Meile is pleased to announce Horn of Plenty, Tobias Kaspar's (*1984, lives and works in Riga, Latvia and Zurich, Switzerland) first solo exhibition in China. The 'Horn of Plenty' is a symbol of bountiful harvest from ancient Greek and Roman mythology. 'Horn of Plenty' was also the title of Alexander McQueen's 2009 Autumn/Winter fashion collection, his last before committing suicide. At this landmark runway show, the fashion designer turned a critical eye on the excesses of the fashion industry that uses the name of 'creativity' to maintain the cycle of consumption, thus shifting the subjectivity of 'creation' from specific creators to the capital production and sales process—a perpetual motion machine driven by human desire.

A decade after McQ's collection, Tobias Kaspar turns this critical view of the fashion industry on a forgotten corner and shifts it to the art world. Since 2015 Tobias has been producing artworks using the infrastructure of a Swiss textile company known for producing fabrics for haute couture, and in the process became interested in a by the company developed series of embroideries made from the 1960s to the 90s for especially the Asia market. For the exhibition in Beijing, Tobias Kaspar photographed a series of precisely these embroideries, which were originally sent out as markers of the Western lifestyles to which Asian consumers aspired, an attempt Tobias Kaspar is questioning herewith. With the use of photography, a method for capturing images with a sense of distance, he has produced pictures with bright colors and clean, simple forms and 'reexporting' them to Asian countries in the name of art on view in the photographs are women wearing ballet costumes, the famous YSL Mondrian dress, street scenes of London or Paris, and people playing polo. The metaphor of old desires coming rushing back as spiritual products is not only an exploration of the power of criticism in today's international art market, but also a look back over a process—of how a material is infused with a fleeting allure.

Another part of the exhibition is connected to the artist's stay in Beijing with Galerie Urs Meile this spring. The artist collected birdcages—these cages used for raising and enjoying birds by Qing dynasty elites can still be found among Beijing's elderly in 2019, and are now attracting the interest of a new generation of youth—and adorned them with elegant, fashionable 'new clothes.' In the artwork Delivery Car, the symbol of express package delivery, that indispensable yet unassuming facet of commercial circulation, has been draped in cotton, just like the bird cages, and applied with acrylic and ink drawings made by the artist himself with motives based on the current September issue of China's biggest fashion magazine. Tobias uses concealment to render it visible, while also beautifying this concealment, as if he is showing pity for them. In Soymilk and other sculptural works, the artist has created nearly identical, life-sized replicas of everyday consumer items such as soymilk as bronze sculptures. For the artwork Raven, which takes the form of a carpet, the artist has geared up with Chinese fashion and home textile brand JNBY.

In early 2020, Kaspar's first monograph Independence, covering works from 2009 to 2019, will be published by Kunsthalle Bern and Koenig Books. Tobias Kaspar's practice includes several offsite projects that attempt to challenge and extend his own practice and the system he works in, these include Kaspar's blockbuster The Street, which was staged 2016 inside the Cinecittà Film Studios Rome making use of Martin Scorsese's crumbling outdoor studio street which was erected for the production of the film Gangs of New York (2002). Its documentation and continuation in form of a book—The Street Cards—was published in 2018 by Koenig Books. But also his own jeans line (since 2012), ballet costume designs for the choreographer Adam Linder, the publishing of the bi-annual publication series PROVENCE (since 2009). Since 2018 Tobias Kaspar co-runs the 'tank to think through contemporary art' Longtang in Zurich, which host also his studio.

Sign up to be among the first to know when new exhibitions by Tobias Kaspar or at Galerie Urs Meile open.
Sign Up
}