Young-Il Ahn (b. 1934, Gaeseong, Korea) is renowned for meticulous abstract paintings that explore his relationship with beauty, nature and music.

Ahn's most famous paintings belong to his Water series, a body of work that associated with Dansaekhwa, an aesthetic position specific to Korea, which expresses natural processes through a monochromatic palette. As a Korean-born painter working in the U.S., Ahn is unique among Dansaekhwa artists.

Along with his connection with the philosophies and practices of Dansaekhwa, Ahn makes many other types of paintings as well. For example, he has created many paintings inspired by music, the beach, birds and the sunset, as well as a pared down series of paintings titled Space, which features sparsely painted canvases that highlight the void.

The son of an artist, Ahn began painting as soon as he could hold a brush. His exceptional natural ability led him to be considered a prodigy, and he was given his first solo exhibition in Tokyo at age six. He earned his Bachelor of Art degree from Seoul National University. His first US group exhibition was in New York, in 1957. Two years later, Ahn had his first US solo exhibition—at the Hull House in Chicago, a south side organisation run by humanist reformers focused on equality and justice. The group offered free arts and crafts classes for many decades. Countless working class Chicago artists in the early and mid-20th century credited the Hull House with their education.

In 1966, Ahn moved permanently to the US, settling first in New York and soon afterward moving to Los Angeles where he still lives and works today. His mature work is heavily influenced by California light and beach culture. His daily interaction with the sea is the primary inspiration for his Water series, which he has been pursuing for three decades. Says Ahn: "When I look out upon the ocean, I tremble as if I am holding part of the universe in my hand. This is why, for the past thirty years I have ceaselessly tried, through The Water Series, to put that 'tremble' onto my canvases. 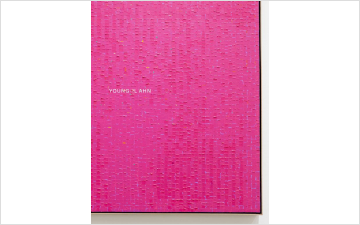