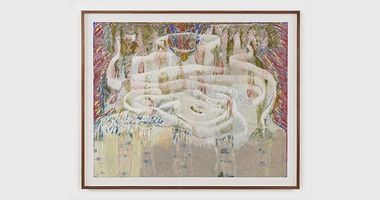 Merging his own personal history with anecdotes, jokes, and literature, Andrew Cranston's canvases are filled with figurative vignettes of dappled, dreamlike scenes that grapple with the strangeness of ordinary life.

Born in Hawick, Scotland, Cranston completed his BFA in Fine Art at Gray's School of Art, Aberdeen in 1993 before receiving his MFA in Painting from London's Royal Academy of Arts in 1996.

Andrew Cranston's paintings draw from a variety of sources, merging his own personal history with anecdotes and jokes, passages from literature, secondary accounts, and observations from ordinary life.

A recurring theme in Cranston's work is the representation of rooms that have been conjured up in works of literature. Notably, his two-panel work Illustration for Franz Kafka story (2nd version) (2007) depicts the bedroom of the hapless travelling salesman, Gregor Samsa, from Kafka's novel The Metamorphosis (1915).

A sense of surrealism is achieved through Cranston's repetitive layering of pigments, for which he often uses hardback book covers as his support, resulting in beautiful vignettes of dappled dreamlike scenes.

Incorporating both rough and scored oil paint alongside smoothed layers of thick varnish, Cranston offers viewers a glimpse at the lower layers of his paintings, allowing a variety of colour and texture to seep through to the surface.

This densely textured, dappled effect in works such as Deja vu and Waiting for the Bell (both 2021) recalls the patterned figurative scenes of Post-Impressionists such as Pierre Bonnard and Édouard Vuillard.

In 2014, Cranston was awarded the Arts Foundation Fellowship for Painting by the Royal Scottish Academy.

Andrew Cranston's solo exhibitions include Waiting for the Bell, Karma, New York (2021); But the dream had no sound, Ingleby Gallery, Edinburgh (2018); If I were a carpenter and other stories, Anthony Wilkinson Gallery, London (2017); Andrew Cranston: Paintings from a Room, Ingleby Gallery, Edinburgh (2016); Book Launch: Who is this who is coming?, Rob Tufnell, London (2015); Who is this who is coming?, Display Gallery, London (2014); What to do after a death in Scotland, Hamish Morrison Galerie, Berlin (2013); Im Büro, Hamish Morrison Galerie, Berlin (2010); and Stoorsooker, Royal Scottish Academy, Edinburgh (2000), among others.

We share a selection of artworks that caught our attention at Art Basel Miami Beach.

We share our highlights from the opening of Art Basel Miami Beach.

Related Press Art reviews: The Art of Intelligent Ageing | Andrew Cranston: But the Dream Had No Sound 17 November 2018, The Scotsman via PressReader

The Ingleby Gallery in the former Glasite meeting hall in Edinburgh is, in contrast, a brilliant adaptation of what at first must have seemed an unpromising space. It was a church with pews and pulpit

The ten vignettes that punctuate the white walls of the Ingleby Gallery invite us to step into the many-chambered mind of Andrew Cranston.

Be among the first to know when new artworks and exhibitions by Andrew Cranston are added to Ocula.
Sign Up Login