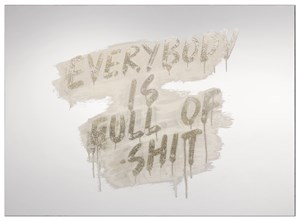 Mel Bochner received his BFA and honorary Doctor of Fine Arts in 2005 from the School of Art at Carnegie Mellon University. He is recognised as one of the leading figures in the development of conceptual art in New York in the 1960s and 1970s. Mel Bochner's work is held in the permanent collections of museums including Museum of Modern Art, New York; Whitney Museum of American Art, New York; National Gallery of Art, Washington D.C.; Centre Georges Pompidou, Paris; Tate, London. Krakow Witkin Gallery has exhibited his work since the mid-1970s.

Sign up to be among the first to know when new exhibitions by Mel Bochner or at Krakow Witkin Gallery open.