La Patinoire Royale - galerie Valérie Bach is pleased to present Automatic Revolution, the third solo exhibition of Martine Feipel & Jean Bechameil at the gallery, in the space of the Grande Nef.

In 2014, the Franco-Luxembourger artistic duo had presented at the gallery the installation entitled A Perfect World on modernist and 'utopist' architecture of the 50's and the 70's, and more especially on the social housing of that time: Les Grands Ensembles. The monumental casts used emblematic edifices building from the period, as well as a series of drawings Dernier Souffles reflecting the end of a Utopia. In 2016, in the exhibition entitled A Hundred Hours from Home, artists moved away from architecture to focus on the objects of our daily lives. Their subject was about modernity and the contradictions it evokes in our contemporary society.

Automatic Revolution is a wild and unlimited possession-taking of industrial robotics and their uses for unproductives purpose. Beyond a theoretical and purely intellectual approach related to the world of informatics, it is a search for the practical and physical experience that we are talking about here.

It tends to take ownership of machines and their programs and to use them in a roundabout way. These are, first and foremost, extremely modern tools used in advanced technology that are not normally part of the public domain.

All the means are valid for the appropriation of these machines and the forms of programming which are their own. Their modifications and their diversion are an intrinsic part of the work of Martine Feipel & Jean Bechameil, who explore their limits. This automation system, which increasingly governs our daily life and is at the heart of our modern world, is nevertheless not very accessible to the public. It is in this that the mastery of the technique and its stakes represents for the artists a revolutionary act and symbolises a seizure of power over a technology that governs us.

The utopias that marked the 20th century are loaded with symbols glorifying the industry while keeping a critical eye on the place that was made for man. Marxist representations of a voluntary and technical proletariat could well be put back on the agenda in our automation society. The vestiges that are proposed to us as historical and that we would like to see relegated as ancient symbols of a bygone past inspire all the more because they are just dreams of a society turned towards collective emancipation. These same vestiges are re-contextualised here in a choreography where the movement is given to see these symbols as fruits of the modern technology. Automatic Revolution seizes the symbols of our modernity to confront them in this new era of automation. It is from a score and a programming system that the lights, sounds and works are set in motion in an automated ballet.

Martine Feipel was born in 1975 in Luxembourg. Jean Bechameil was born in 1964 in Paris. The artistic duo has been working together since 2008 and currently live in Brussels. Martine Feipel studied art at the University of the Arts in Berlin and the Central St Martins College of Arts & Design in London. Jean Bechameil went to the Ecole des Beaux-Arts in Paris and the Willem de Kooning Academy in Rotterdam. He has also worked on various film scenographies and has helped to create sets for several films by Lars van Trier. The work of Martine Feipel & Jean Bechameil deals with questions of space. Selected in 2011 to represent Luxembourg at the 54th Venice Biennale, their work attempts, in a destructive way, to show the complexity of ideas hidden in the traditional way of constructing space and at the same time, it seeks to open a perception for an alternative reflection. In their work, art and society go hand in hand. Over the last ten years, they have been invited to numerous international exhibitions, such as Kunstmuseum Bonn, the Pavillon de l'Arsenal in Paris and the Beaufort Triennale in Belgium. In 2017, the Casino Forum of Contemporary Art Luxembourg dedicated a monographic exhibition to them. The COAL special prize of the 2018 Jury was awarded to them for their project City of Emergencies - Apus Apus. They are invited to create a perennial work in the public space for the Voyage à Nantes in 2019. 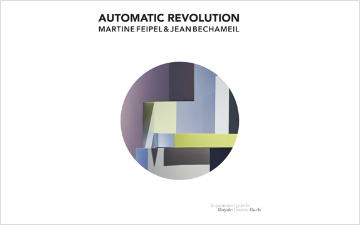 Sign up to be among the first to know when new exhibitions by Martine Feipel & Jean Bechameil or at La Patinoire Royale – galerie Valérie Bach open.
Sign UpLogin