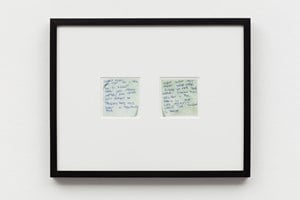 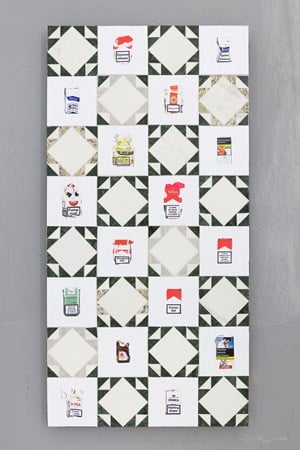 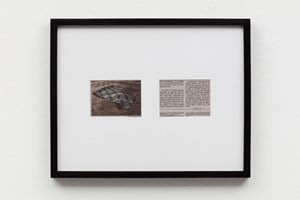 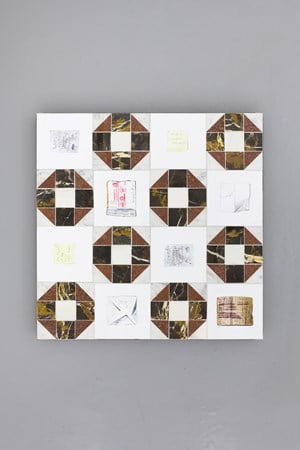 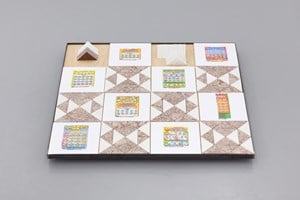 The city is a network of visible and invisible convergence points.

Predetermined or by chance.

It was the case that all roads lead to Rome.

At some point, I understood, that I am a crossroads, wherever I am.

Points converge, if only for a moment.

Maureen Paley is pleased to announce a solo project by LA based artist Michael Queenland.

The work for the exhibition began in Rome, Italy in 2016. Traversing the city by foot, Michael Queenland began making a visual, material, and temporal record of Rome composed of discarded objects that he came across on the street while running errands or on his way to specific sites over the course of one year.

As things were collected and brought back to his studio, both sides of the found objects were digitally scanned and the images were organised into general categories. From these 2500 scanned images made over a period of a year, the artist selected items from various groupings and printed the images onto ceramic tiles, later composing 25 individual tile panels based on visual, narrative, or thematic similarities. A selection of three of the twenty five panels are shown for the current exhibition. The printed ceramic tiles are interspersed among inlaid geometric patterns that the artist designed and cut from marble and granite. While the patterns within the panels are the artist’s own design, they were inspired by examples of Roman medieval period Cosmati style mosaics that make up the church floors of several basilicas in Rome, such as Basilica di San Clemente al Laterano and Santa Maria in Trastevere.

The exhibition also includes a print from the artist’s ongoing work Rudy’s Ramp of Remainders, first shown in 2012, in which he clipped every published image of a dead body that appeared in The New York Times over the course of one year–from late 2011 through early 2013. The image is comprised of both the front and the backside of the same newspaper clipping, showing both sides simultaneously.

Michael Queenland (b. 1970, Pasadena, California) He lives and works in Los Angeles. In 2016, Queenland received the Rome Prize and was a fellow at the American Academy in Rome from 2016–2017. Solo exhibitions include Rudy’s Ramp of Remainders, The Santa Monica Museum of Art (now ICA-LA) (2012); The M.O.R.L., LA><ART, Los Angeles (2007); Michael Queenland: Photographs, Sculptures and Shaker Classics, the Institute of Contemporary Art at Maine College of Art and The Massachusetts College of Art both in 2005. Selected group exhibitions include Made In LA, Hammer Museum, Los Angeles (2018); Stories of Almost Everyone, Hammer Museum, Los Angeles (2017); Whitney Biennial, New York (2008); Frequency, The Studio Museum in Harlem, New York (2005). Michael Queenland was Assistant Professor of Sculpture at the Yale School of Art from 2010–2016.

Sign up to be among the first to know when new exhibitions by Michael Queenland or at Maureen Paley open.