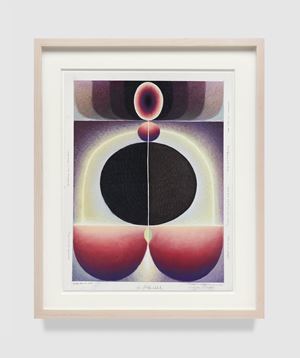 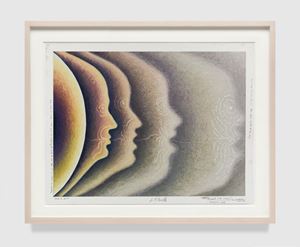 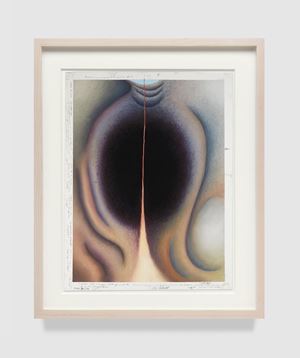 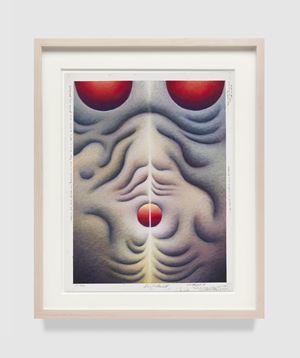 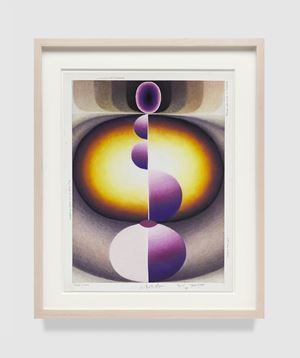 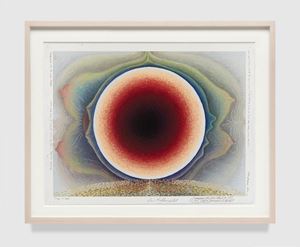 Loie HollowellBirth, perspective from above and below, 2020Soft pastel and graphite on paper
50.8 x 66 cm Pace Gallery 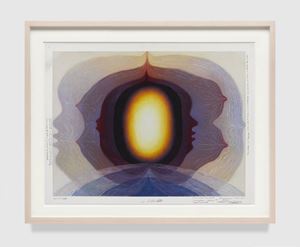 Loie HollowellPerspective From Above and Below, 2020Soft pastel and graphite on paper
50.8 x 66 cm Pace Gallery 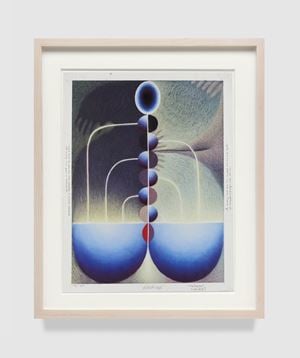 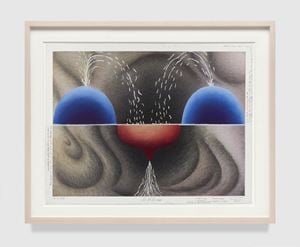 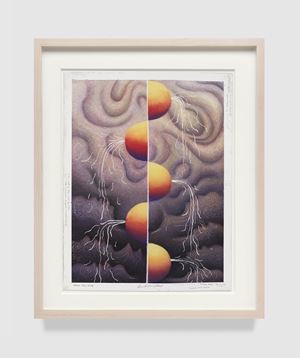 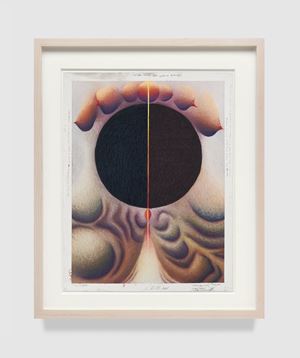 Loie Hollowell's pastel drawings for Going Soft explore the physical and psychological experiences of pregnancy, birth, and postpartum. Serving as abstracted self-portraits, each drawing reveals the artist's interior psyche at the time of the work's creation.

This series began with pastel drawings made by Hollowell after her first pregnancy. At the time, the artist was preparing for Plumb Line, her September 2019 exhibition at Pace's new gallery in New York. The series has since continued into the first half of 2020 while Hollowell was in quarantine during the COVID-19 pandemic, before and after the birth of her second child.​

Hollowell's recent drawings mark a shift in the artist's visual language towards a new sense of fluidity, depicting an intensity in form, texture and colour, and a departure from the symmetrical composition of her earlier works.

Through experimentation with horizontal fields and organic shapes, Hollowell harnesses the primal energy flowing between mother and child.​

In Deep Tear and Postpartum Belly Void (both 2020), a central beam pierces darkened spheres and dissolves in amorphous churning forms, gesturing to both the physical experience of birth and the surreal transformation of the psyche.

Letting go of control in my process gave way for a sort of catharsis in my personal life. By expressing my psychological state through form, colour, and texture I was able to create with more immediacy and improvisation in my work. Muddled, unorganised, and loosely rendered, compared to my earlier drawings, this series reveals the journey of my psyche, acting as chapters to my transforming mental state through both pregnancies and births of my children into a world that I have little control over. —Loie Hollowell

For Hollowell, drawing is interchangeable with painting as a primary part of her practice. The two are inextricably woven together as one continuously informs the other. ​

Every piece comes from drawing. I do a bunch of really quick sketches and doodles in my little nighttime journal. That will develop into a drawing and if I really like it, I will grid it out and grid that out on to the canvas and leave it around in case I want to paint on it later. Sometimes a drawing will inspire another drawing, on another canvas. I won't even go to paper, I'll just draw it out on the canvas. And then that might lead to a drawing on paper, which might lead to another painting. Sometimes a painting can do what I want better than a drawing, and sometimes a drawing can do it better than a painting. —Loie Hollowell​

Hollowell's relationship to the body, mind, and form in her drawings and paintings evokes the approaches of Georgia O'Keeffe and Judy Chicago. These are significant influences for Hollowell and were particularly present in the artist's mind during this time of seclusion.​

In isolation, I wanted the company of the work of these artists in my mind. I wanted the freedom to let my influences be present. It allowed a new avenue to open up and it allowed me to find a new voice. I tried to care less about perfection and planning. I let the compositions emerge. I knew I had a few things to include compositionally and I let the forms come up around them. ​—Loie Hollowell

Hollowell's new works reflect on the physical reality of childbirth and motherhood. Each piece is grounded in the vital force of the body: spheres are halved and quartered into belly, hips, breasts, butt. The almond-shaped mandorla is at times a vagina, a glowing heart space, or a reference to the mind placed at the top of the spine. With nipples spouting milk and hands reaching, Hollowell's abstractions point to the swirl of postpartum life that is dominated by the needs of others.

Hollowell's work calls to mind other artists who have explored the psychological space of motherhood, such as Senga Nengudi and Louise Bourgeois, among others.

I'd just had my two children and was fascinated with this issue of pregnancy, how you expand beyond all recognition sometimes. And then your body is so resilient and just bounces back into shape—well, pretty much so. There was also the elasticity of the psyche during pregnancy, this constant resilience that the body enacts." —Senga Nengudi

While approaches to form and material diverge in each artist's practice, their shared visual language suggests that the lived experience of pregnancy and postpartum life is an abstract temporal reality, charged with psychological depth and offering new perspectives that propel artistic practice forward.

Sign up to be among the first to know when new exhibitions by Loie Hollowell or at Pace Gallery open.