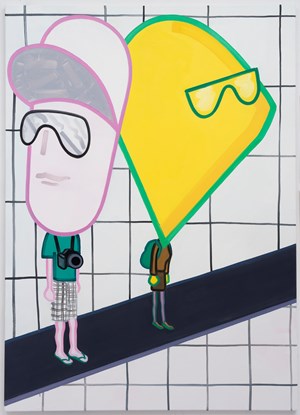 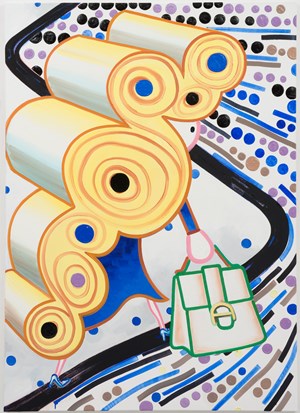 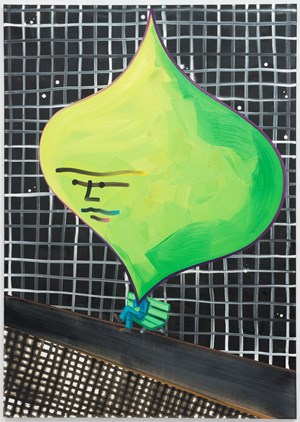 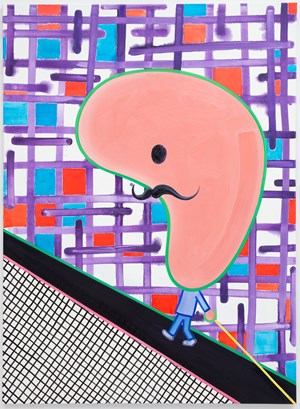 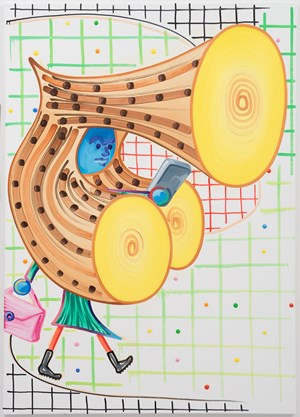 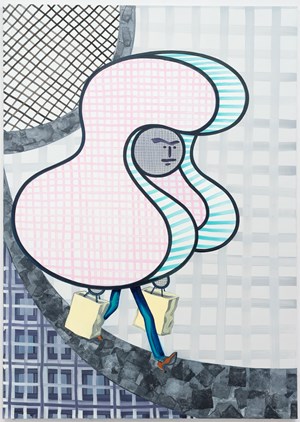 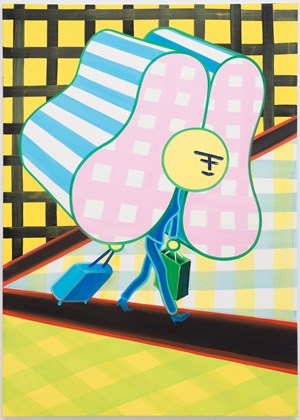 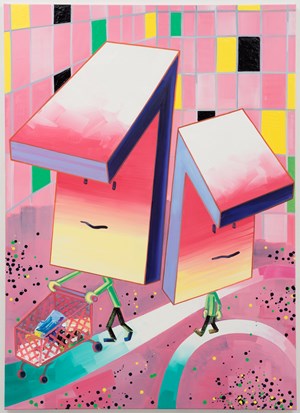 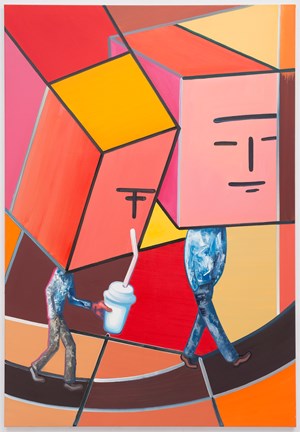 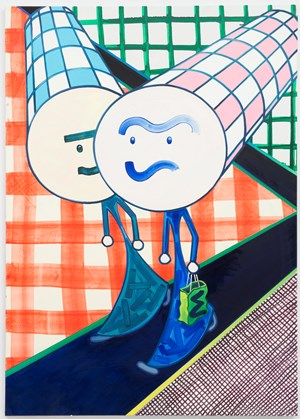 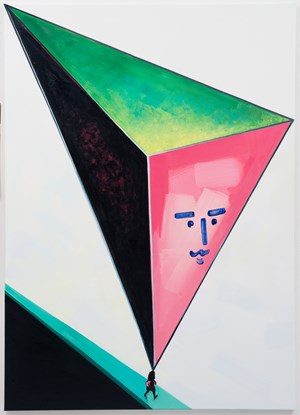 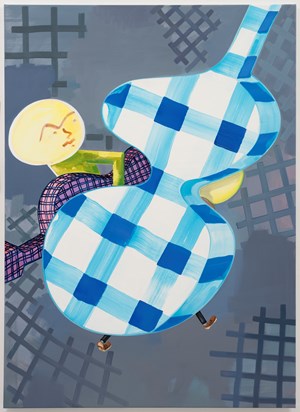 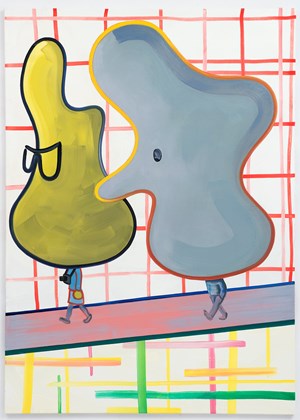 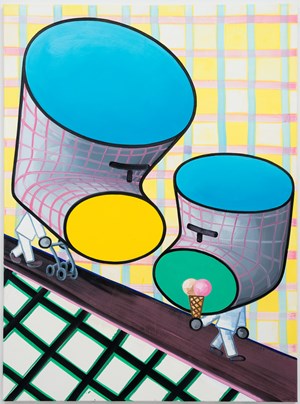 Thomas Erben is excited to present C&A, the gallery's second exhibition with Berlin-based painter Marcus Weber. Presented here in their entirety for the first time, C&A collects Weber's series of pedestrian scenes, each of them frozen amid gridded and abstract painterly spaces. Evoking the work's multiple layers of references, C&A refers to a German-Dutch chain of fashion stores (a stand-in for mass consumer culture), though it may also refer to the titles of his canvases and the titular characters populating them. Of the series, which was begun in 2013 and completed in 2018/2019, only Jacques (2013) had been previously exhibited, when it was included in the Sanya Kantarovsky curated group show Sputterances, at Metro Pictures (2017).

Projecting the city grid in all directions, Weber's series explores a colourfully exploded, chimerical take on street observation, mining geometric abstraction, street life, comics, the microscopic, and the cosmic. The built world in C&A ripples with a rigorously off-kilter temperament, a mix of an observant eye, meticulous craft, and a deeply wry outlook. It's a combination very much Weber's own, rifling through a panoply of influences from the abstract painting movements of the 20th Century and Polke's and Majerus' strategic use of juxtaposition to 19th century French caricature (its popular renderings of large heads, small bodies, and biting social critique providing a particularly rich touchstone). Even Albert Einstein seems to hang over the series, his space-time model of the underlying fabric of the universe (often visualised as a cosmic web) adding still one more reference of order and scale—one even more grand and rational than the iconic city grid.

From the furthest, most conceptual perspective, the works in C&A can be seen as an exploration of modern art's trickling influences—its ongoing infiltration, in terms of ideas and images, into the everyday.

In Charlie (2013), for example, Weber renders an enormously bulbous-headed figure at ease on a bench. A white grid against a black background, casually rendered in an uneven hand, frames the titular man. Weber's easy approach to the evening sky is offset by a keen use of shading and texture throughout the figure's onion shaped-head. Lost in thought and outlined against Weber's city-space-time grid, Charlie is an absurd, contemplative figure, one random romantic nevertheless looming large over Einstein's immense, revealed universe.

With Selin & Dilara (2013), Weber applies paint in bold, short strokes upon the two eponymous figures' dresses, imparting a smeary, thick texture, while elsewhere he creates grids out of thin, loosely applied lines. Weber obviously relishes the irregularity of the hand and materiality of paint, as no grid is painted exactly the same. Selin and Dilara's faces are rendered very simply, almost akin to emojis, a reflection as much of their ubiquitous usage today as to their predecessors in 19th century caricature and modernist art's simplification of faces and the figure.

Viewed as a group, C&A is a bird's-eye view of the ceaseless city, constructed snapshots of what increasingly looks like one huge megacity. While rationally structured in Weber's wall-to-wall grids (which evoke everything from jails, cartography, tablecloths, early video games, and 3D computer graphics), these paintings sprung from the pleasure and flow of life that has long driven portraits of city living. With this as his starting point, Weber executed C&A's works in a dynamic synthesis of painterly styles and approaches, raising the question: do modernist ideas and visuality still carry their once radical potential or has their absorption into contemporary visual culture rendered them as enjoyable, if empty signifiers.

Sign up to be among the first to know when new exhibitions by Marcus Weber or at Thomas Erben Gallery open.