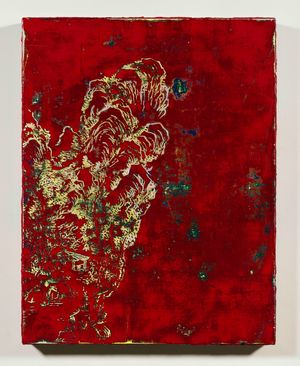 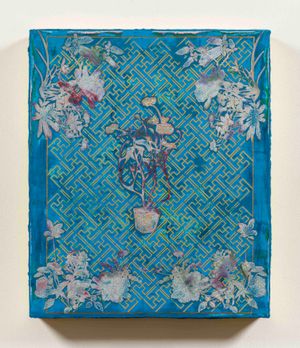 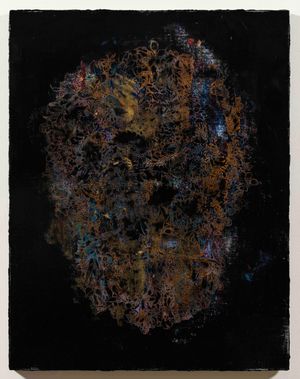 Drawing a parallel between the painting language from Xiang Nai Er, his 2019 solo exhibition, Su continues his pursuit of realist imagery through craftsmanship, as well as his use of traditional flora and fauna paintings and decorative patterns in Self-exoticism, his latest solo exhibition. Layers upon layers of paint are applied onto the canvas through flat-colouring and screen-printing before the artist sands them down in an attempt to cancel the materiality of the pigments themselves, while concealing the physical labour and traces of time during the art-making process. From two-dimensional painting to three-dimensional objects, Self-exoticism explores the curious sensual pleasures of objects themselves, and poses a question: Do the elaborate, many layers and coatings wrestle with a peculiar cultural experience? The Bonhams London's auction site lists a lot of four Qing-dynasty cloisonné enamel flower panels previously owned by Lady Anne M.S. Durston. Having chanced upon this web page, the artist couldn't help but imagine: When Lady Durston looked at the object that had traveled so far from an exotic, distant culture, a feeling of wonder arose in her, who marveled at the style, motif, and palette of this splendid relic. This exoticism mirrors the fantasy of replacing localisation, estranged from the object's state of being, nestling this longing in an otherness that transports the viewer to a heterogeneous space.

For two of his latest works View With Perspective 1 and View With Perspective 2, Su has adopted the technique of stretching a thangka canvas, and printed on the canvas landscape paintings that are usually exported to the West, as a contrast to the taste of the literati and aristocracy, embodied in the Manual of the Mustard Seed Garden, which is screen-printed on the other side. Two similar mise-en-scènes juxtapose with each other as modular templates, while confronting the viewer in the form of an object. The shifting perception of cultures becomes the content of the work that is meant to be consumed. A visible object allows the viewer to form a comprehension system as they appreciate the object, while opening up multiple temporal dimensions. In his essay 'Of Other Spaces' (Des espaces autres), Foucault states that history should be viewed as a deployment (dispositif) of various heterogeneous forces in dissemination or accumulation, a layering or arrangement of heterotopias. The identification system of the viewer transcends art history and the usual way of seeing, where the viewer distinguishes cultures embedded in a work of art, thereby creating a hierarchy of cultures, whether knowingly or not. If we view Su's work via this approach, we would find ourselves amidst the inner network of culture, knowledge, and imagery, alienation and assimilation interwoven.

A heterogeneous and conflicting force exists in contemporary visual experience, where viewers identify cultures and symbols as they appreciate a work of art, in an attempt to return to a historical approach that belongs to the particular times when the work was made and enter an open or closed system. Appropriation, emulation, layering, and sanding: If we see the blending of East and West in Giuseppe Castiglione's painting style, then Su Meng-Hung responds to the re-amalgamation of Eastern and Western craft histories with such techniques as simulation, xipi (literally meaning rhinoceros hide, a term describing marbled lacquer surface, as layers of differently colored lacquer applied to an uneven surface), mother-of-pearl inlay, even cloisonné, to render a physical texture of the pigments. From luminosity, distance, to perspective, with a palette of black, green, red, and golden, Su's decorative acrylic paintings are sandpapered and dewrinkled, texture of the paint polished flat, as if posing a question on the production of art within capitalism: Does an exquisite work of art entice the viewer from its artistic quest with the divergence between its appearance and essence?

The nuanced shifts between material and non-material, existence and disappearance, space and non-space, in a way, echo today's contemporary life, which is profoundly immersed in the experience of reading on a mobile device such as a pad, instead of observation with the naked eye. A kind of fracture resides in the observer's visual experience in the act of mirroring, not limited to the cultural identification, but also rendering a two-dimensional image as a space that is tangible and perceivable. Whether it is an expressive posture, or a decorative collage, Su Meng-Hung's Self-exoticism holds up a mirror that reflects what is foreign in the cacophony. The viewer discerns culture, refinement, and kitsch in polysemous heterotopias that juxtapose with each other, while relentlessly projecting the self onto the exoticised mirror as a participant.

Sign up to be among the first to know when new exhibitions by Su Meng-Hung or at Tina Keng Gallery open.