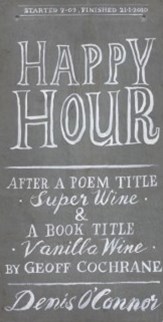 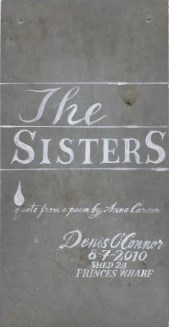 Denis O’Connor’s recent project has been slowly gathering momentum. Divided into three chapters, Chapter One was shown in November 2008, when O’Connor introduced us to his guide to the routines and endeavours of art making, The Tangler.

His project opens a door into the private territory of the artist’s studio and gives us an illustrated guide to the obsessive fables and mysterious impulses that play out within these confines. Our host, The Tangler is an artist-figure who can assume many roles and voices. He is from a tribe whose habitat is the periphery and the studio is a do-it-yourself laboratory where his equations and experiments explore the minutiae of his looped journeys.

“The Tangler’s Cave portrays an artist-figure appropriated from the social histories of a previous generation in Ireland. A tangler operated unofficially, outside of formal sanctions and conventions, at rural horse-fairs. He entered the scene when the prospective buyer of a horse had wandered off shaking his head at the price asked by the horse’s owner. “Sure I can make the seller see reason”, the tangler confides to the potential purchaser. He then proceeds to fulfil this, lobbying with the horse’s owner, to the satisfaction of all. A small fee was involved for this act of ‘untangling’. He was a go-between you could say and arbitrated common ground for the divided parties. Similarly, the artist operates between inner and outer worlds, resolving conflicted viewpoints and landscapes. He is an intermediary.

The Tangler’s Cave pictures this masked artist-figure in the confines of the studio and his dutiful endeavours as a performance piece with strong overtones of masquerade and pantomime. Comic and tragic are given equal roles. Absurdity and self-parody are the devices by which this artist figure can rise above the impossible heroics and arguments with the self. Portraying themselves in the studio has great lineage as a subject for artists in the Western traditions.”

Denis O’Connor is one of New Zealand’s foremost sculptors and his work is represented in all our major public collections. He has received many prestigious public and private commissions; most recently the new gateway sculpture, ‘Keelstone’ at the Connells Bay Sculpture Park and a major collaboration with Stephens-Lawson architects on their newest residential building.

Works from The Tangler, Chapter One have been touring Regional Art Museums throughout New Zealand in an exhibition entitled Diaspora. Another work from the series is included in an international exhibition, Purakau, Myths and Legends, touring museums in Cuba, Mexico and Spain and featuring four New Zealand artists four Cuban and four Mexicans.