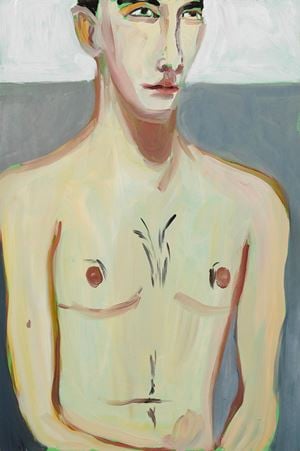 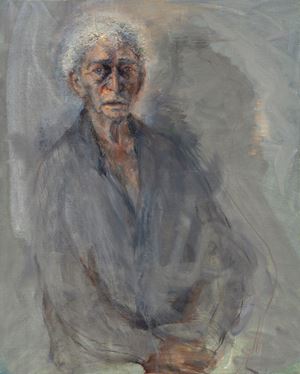 Victoria Miro is delighted to present I See You, an extended reality (XR) exhibition of paintings that brings together historical and contemporary works by female artists with a focus on depictions of male subjects. I See You is available exclusively online in our new virtual gallery on Vortic.

From portraits of family members to paintings of invented characters and those that challenge a traditional understanding of the 'male gaze', works on view invite us to consider the characteristics and qualities that connect or divide us along shifting lines of gender and how differences might be bridged by a shared understanding of consciousness – what it means to see and be seen. Complexities of gender are further elaborated upon by the artist's role not only as painter but, in some instances, as mother or partner, where to be seen is also to be loved, nurtured, admired, or desired.

Completed in 1954, Alice Neel's Richard with Dog is the earliest work on view. It depicts the artist's elder son, Richard (born 1939) a year after he had entered High Mowing School in Wilton, New Hampshire. A number of Neel's paintings from this period feature her sons, Richard and Hartley, and occasionally their friends – and a sense of nascent adulthood, of boys becoming men, moving in their own direction, is palpable in these works. María Berrío's The Sea Between Us, 2020, is a portrait drawn from imagination that depicts a boy on the cusp of manhood sitting in front of a roiling sea. In creating the work, Berrío tried to envisage a boy looking at her through the eyes of the men in her life – namely, her father, her husband and her son. While water symbolises her boundless love for these men, it might also denote her ever shifting roles and even the gulf between them. As the artist says, even 'love cannot completely close the distance.'

The ways in which we inhabit or enact gender, accentuated during times of accelerated transition such as adolescence, are keenly expressed in Chantal Joffe's Herb on the Red Stool, 2019, a portrait of the son of a close friend, whom Joffe has painted for a number of years. Joffe captures him at a poignant threshold, exuding both the vulnerability of youth and the coolness of a matinee idol.

Sarah Ball's Timothy, 2020, is drawn from a recent series featuring people the artist discovered on Instagram. Seeing the social media platform as a successor of the photographic studio – where people would pose in their best clothes for formal portraits – and the photobooth – where many a nascent self-image was formed and performed – in this body of work, Ball looks at the effect that the visual manifestation of the 'self' has upon traditional, binary norms in areas including gender and sexuality. While they have never met, Ball was immediately drawn to the narrative of Timothy's posts and their strong visual identity, which project a strength and individuality as well as revealing vulnerability. She uses them with his permission to create works that speak to the ways in which we create and curate versions of ourselves in the real world and online, a series of projections further enriched through the process of painting.

First exhibited at La Biennale di Venezia, 58th International Art Exhibition, May You Live in Interesting Times, I Dey Feel Like..., 2019, by Njideka Akunyili Crosby revisits the artist's earlier interest in portraiture, exploring the legibility of the body as a surface. The work, titled after a popular song by the Nigerian pop singer 2baba, uses fluorescent, cobalt, and ultramarine blues to depict a young man whose photograph the artist found in Arise, a now-defunct African lifestyle and arts magazine. Simultaneously referring to Yves Klein's monochromes and Chris Ofili's blue paintings, the artist's palette in this painting enabled her to explore the luminescence of black skin under coloured light.

A cultural framework of looking is foregrounded in Lisa Yuskavage's Wee Dude Looks Like Jesus, 2014, an affectionate depiction of a bearded figure that, filtered through a lens of 1970s hippiedom, continues a subcultural theme in Yuskavage's art while referring to the art-historical genre of the nude, which for centuries was shrouded as religious subject matter.

Celia Hempton's Ben, 2016, is from an ongoing portrait series using friends as models who pose naked for the painting which is made in a single sitting. The intimacy of the documented encounter is bound into the process and outcome, intensified by Hempton's compositional cropping to focus on the genital area. The artist and viewer look at the model from behind, questioning and subverting traditional power dynamics, both between male artist and female muse and in the wider context of the world at large.

Writing in her autobiography Self-Portrait, Celia Paul comments that 'I have noticed that the men I have worked from are interested in the process of painting and in the act of sitting. The silence, when I am working from men, is less interior.' Paul's painting Steve, 2019, depicts her husband, the philosopher Steven Kupfer who, she writes, 'memorises cryptic crossword clues the night before and solves them in his head as he sits... He likes the challenge of it all, and his ritual is part of the pleasure he takes in sitting. I think he needs his participation to be "active".'

Maria Lassnig's Tragisches Duett / Dramatisches Duett (Tragic Duet / Dramatic Duet), 1987, depicts two figures, one actively reaching into the space, the other passively turning away, curling into a near foetal position. Throughout her career, Lassnig devoted herself to recording various physiological states, looking at herself and the world around her in a direct and unflinching style. While Tragisches Duett / Dramatisches Duett (Tragic Duet / Dramatic Duet) appears to be a meeting of two strikingly different characters, equally it suggests that the characteristics on display – both active and passive – are aspects of the artist herself and, by extension, of us all – ours to wrestle with or embrace.

Kudzanai-Violet Hwami's A theory on Adam, 2020, is essentially a meditation on the artist's relationship with her father within the context of a wider reflection on the male body and role. In seeking to highlight her own early memories of abandonment, the artist contemplates the widespread lack of male guidance and positive male figures in Sub-Saharan Africa. This work further reflects on gender dysphoria which, for the artist, is intimately linked to her contemplation of the male body and role.

Jessie Makinson's Furry Darkness, 2020, was painted in the weeks before the lockdown, and is subconsciously filled by many of the anxieties and fears of that time. Despite this, this crowded scene of isolated figures reveals tender likenesses of her partner and their world. Makinson has long been interested in figures waiting either in a past or post-apocalyptic future setting. Figures in Furry Darkness are occupied with things that do not seem clear. They are clothed in patterns from animals or plants; some are disguised in leaves or with fake moustaches. The figures inside are idling, whilst the groups outside appear busy. These contradictions reflect the precariousness of where our old world meets the new one. Influences in Makinson's work range from the early Renaissance artist Sassetta to the twentieth century British artist Stanley Spencer.

I See You on Vortic

Sign up to be notified when new artworks and exhibitions at Victoria Miro are added to Ocula.
Sign Up