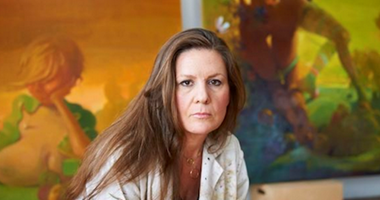 New York-based Lisa Yuskavage (b. 1962, Philadelphia) is a figurative painter minutely versed in the history of the medium, channelling artists from Francisco de Goya to Édouard Vuillard and Philip Guston in her ostensibly kitschy canvases. With references also ranging from old master paintings to 1970s soft porn, her paintings are immediately recognisable for their absurdly proportioned naked and semi-clad women, but also for acid-bright landscapes, uncanny interiors and hippie figures that seem to have been cross-pollinated with religious icons. She sensitively deploys colour to convey the emotional states of her figures who appear alone, in pairs or in tableaux, and who in more recent times, have begun to include men. In addition to the figures' delight in their own fleshiness, there is also an overpowering sense of otherworldliness at play in her use of colour and form.

Yuskavage earned her BFA at Tyler School of Art, Temple University in 1984 and her MFA at Yale University School of Art in 1986. Her breakthrough came in the early 90s, with The Ones That Shouldn't: The Gifts (1991) and the ‘The Ones That Don't Want To’ series (1991–2), the latter of which the artist also refers to as her ‘Bad Babies’. The earlier work shows a large-breasted young woman emerging from a rich green background with a sprig of flowers stuffed in her mouth and her arms pulled behind her back. ‘The Ones That Don’t Want To’ paintings, meanwhile, are shockingly vibrant portraits of girls naked from the waist down, who appear to be merging with their pulsating backgrounds and stare (with the exception of one slightly more dreamy figure) disconcertingly at the viewer. Rising to prominence around the same time as other figurative painters such as Elizabeth Peyton and John Currin, in the 1990s Yuskavage commanded solo shows at galleries in New York, Santa Monica, Milan and London. In 2000, she held an important solo in her hometown of Philadelphia, at the Institute of Contemporary Art. ‘I confirmed for myself that she paints wonderfully, and that wonderful painting is what concerns her,’ wrote Peter Schjeldahl in the New Yorker at the time. Notable other solo exhibitions have taken place at Centre d'Art Contemporain, Geneva (2001); Royal Academy of Arts, London (2002); Museo Tamayo Arte Contemporáneo, Mexico City (2006); and The Royal Hibernian Academy, Dublin (2011). A major survey spanning 25 years of of Yuskavage’s work titled The Brood opened at the Rose Art Museum, Brandeis University in 2015 (12 September–13 December 2015), and later traveled to Contemporary Art Museum St. Louis (15 January–3 April 2016). An in-depth book was published by Skira Rizzoli in association with the Rose Art Museum.

With a career spanning over 30 years, New York-based Lisa Yuskavage (b. 1962, Philadelphia) is a figurative painter minutely versed in the history of the medium, channelling artists from Francisco de Goya to Édouard Vuillard and Philip Guston in her ostensibly kitschy canvases. Her paintings are immediately recognisable by their absurdly...

Read More
Related Press Good World to Be In: An Interview with Lisa Yuskavage 6 May 2015, Paris Review Daily

Since her arrival on the art scene some twenty-five years ago, Lisa Yuskavage has made a name for herself with paintings that use classical techniques to depict unabashedly taboo subjects. Her creations—awash in radiant, hallucinatory colors and featuring hedonistic heroines unlike anything else in art today—are instantly identifiable....

A conversation about giving a voice to untold stories that draws on Jane Campion, Philip Guston, and the raw authenticity of human emotion. The fourth episode of Dialogues: The David Zwirner Podcast features painter Lisa Yuskavage—known for her portraits of nude figures and her skilful control of colour—in conversation with widely...

Be among the first to know when new artworks and exhibitions by Lisa Yuskavage are added to Ocula.
Sign UpLogin