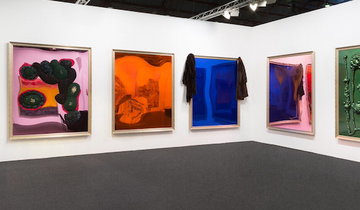 Controversial and uncompromising in his penchant for offbeat and confrontational gestures, Australian contemporary artist Dale Frank has divided critics and public alike over the past three decades. His practice is wide-ranging—from documentary films to eccentric performances—but today Frank is best known for his large-scale biomorphic abstract paintings and reflective resin paintings that challenge traditional notions of the medium.

Beginning to attract attention while still in his teens in the late 1970s, Frank spent ten years in Europe and the United States, returning to Australia in 1988. The beginning of his career was dominated by performance-based work; a notable early example took place in the late 1970s in Italy, where gallery-goers were presented with the then-teenage artist's legs and leather shoes dangling through a hatch in the ceiling.

Later in his career, Frank began exploring sculpture and installation and, eventually, painting. His current painting method involves pouring and brushing on several layers of thick varnish and colour pigments or clear resin, which sometimes embed colour glitter and studio detritus. These distinctive paintings do not depict anything identifiable, but rather are an exploration of different materials, movements and colours. Occasionally, he also includes readymade and industrial elements, such as construction foam, automotive paint, brightly coloured artificial hair (Dale dug another hole [2017]) or silver foil air-ducts (She was a collector of the best Art even though she relied on Emirates points to maintain her lifestyle [2018]). Given their unusual materials, Frank's paintings are not static objects; the materials can settle, react and produce structural changes even once they have left his studio. In recent years, the artist has replaced his usual canvas surface with Perspex, its reflective nature adding another layer to the work.

Provocative titles are often important to Frank's paintings, for example: Roslyn is the difference between Qantas gold and platinum or He always bought funeral insurance for all his boyfriends (both 2018). Sometimes the titles themselves are lengthy, self-contained narratives, with no apparent connection to the works to which they are attached. These lengthy interludes disrupt attempts to read specific meanings into the paintings themselves.

Interactive performance and installation remains an important part of Frank's career. In 1995, in lieu of showing paintings, the artist staged a disco—including fog machines and a mirror ball—at Roslyn Oxley9 Gallery in Sydney, and titled the exhibition Dale, I'm only dancing. For his 2018 installation Ghost Story at the same gallery, Frank covered the walls and ceilings in reflective Mylar fabric lit with LED lights and presented petri dishes containing his personal bacteria, which grew into a dangerous state in agar.

Dale Frank was the subject of a major retrospective at the Museum of Contemporary Art Australia, Sydney, in 2002. He was selected for the Biennale of Sydney in 1990 and 2010, and in 1984 he was included in the Aperto section of the Venice Biennale. His works are held in major private and public collections worldwide, including the Museum of Fine Arts, Boston; Kunsthaus, Zürich; and the Solomon R Guggenheim Museum in New York. In 2005, Frank was awarded the Arthur Guy Memorial Painting Prize from Bendigo Art Gallery.

I feel as though the new paintings are much more intimate as opposed to purely reflecting what the viewer sees or projects.

During a career spanning three decades, Dale Frank has worked with multiple mediums including installation, film, sculpture and painting. Most recently he has been spending a considerable amount of ti

Entering Dale Frank’s solo exhibition at Pearl Lam Galleries in Hong Kong was comparable to stepping into a parallel universe where shapes are distorted and luminescent colors reign supreme. It was an

‘It is not important to me if the image is flat or extends so far out from the wall that it touches the floor.'

A sculpture in the bathtub, a horse on the couch and a disco in the loo are just some of the ways artworks have been exhibited at what is emerging as Melbourne’s most exciting art fair. The Hotel Windsor is, once again, about to be transformed by SPRING 1883, a high-end contemporary art show to be held as part of Melbourne’s Art...