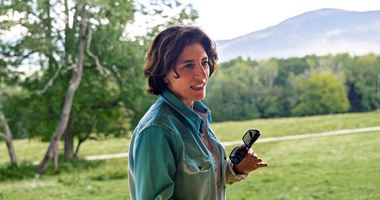 Based in Berlin since 1984, Iranian-born artist Nairy Baghramian creates perplexing sculptures and installations out of silicon, resin, and steel, among others, that examine the relationships between the human body and architecture. In her incessant questioning of the traditional medium of sculpture, Baghramian provokes an examination of form and content.

Nairy Baghramian draws from a range of sources in her work, including art history, interior design, architecture, theatre, and literature. The simple and suggestive forms of her sculptural objects often evoke Surrealist or Minimalist sensibilities; in her interview with frieze in 2010, Baghramian noted that 'the displacements and contradictions of Minimalism' have influenced her. Her 2002 installation The Iron Table (Homage to Jane Bowles), as its title suggests, is directly inspired by the American writer Jane Bowles' eponymous short story, which forwards a tourist Anglo-hetero couple's escapist fantasy about moving out to the desert.

References to the human body and its corporeality are recurrent in Nairy Baghramian's sculptures such as 'Scruff of the Neck' (2016). In this body of work, white plaster parts are affixed to aluminium casts and rods, in arrangements that suggest, at times, dental braces. Some of the white forms are also tinted with yellow or pink, hinting at encroaching decay.

Nairy Baghramian's investigation of the sculptural medium can be seen in 'Maintainers', a group of sculptures that are typically shaped like stones and consist of aluminium casts and lacquered painted braces, with a finish in coloured wax. Exhibited in presentations such as her solo exhibition Maintainers (2018) at kurimanzutto, Mexico City, or the 58th Venice Biennale (2019), the elements in 'Maintainers' are organised into interdependent positions. Individual sculptures rely on each other for physical support, which, in turn, point to the inseparable relationship between form and content.

Nairy Baghramian's major retrospective exhibition, Déformation Professionnelle toured S.M.A.K. Museum of Contemporary Art, Ghent, Belgium (2016) and Walker Art Center, Minneapolis (2017). Instead of bringing together a selection of her works from across her career, the artist reconfigured the definition of a survey exhibition by presenting new sculptures that revisited her practice of the past two decades.

Sign up to be notified when new artworks and exhibitions by Nairy Baghramian are added to Ocula.
Sign UpLogin