Deaf artist Christine Sun Kim performed sign language renditions of both 'The Star-Spangled Banner' and 'America the Beautiful' during Super Bowl LIV on Monday night, but audiences could be forgiven for having missed her.

Live audiences were able to see Kim virtuosically signing lines like 'the rocket's red glare, the bombs bursting in air' on jumbo screens inside the stadium, but she barely appeared on FOX Sports' coverage of the event, which was broadcast on TVs and online. They showed Yolanda Adams and Demi Lovato singing on the 50 yard line, but ignored Kim signing along on the 40.

'Though thrilled and excited to be on the field serving the deaf community, I was angry and exasperated,' Kim wrote in a New York Times op-ed.

Anger and exasperation at the treatment of the deaf community is a recurrent theme in Kim's work. At the 79th Whitney Biennial in 2019, she exhibited charcoal drawings that included Degrees of My Deaf Rage in the Art World (2018), which represented her anger at different kinds of mistreatment as different angles.

Christine Sun Kim, Degrees of My Deaf Rage in the Art World (2018). Charcoal on paper. Courtesy the artist and François Ghebaly gallery.

'Curators who think it's fair to split my fee with interpreters', for instance, provoke 'Reflex Rage', while the Guggenheim Accessibility Manager draws 'Acute Rage'.

Charts inspired by memes are another favourite part of her practice. Kim has created pie charts that answer questions like 'Why My Hearing Daughter Signs' and 'Why I Work With Sign Language Interpreters'. 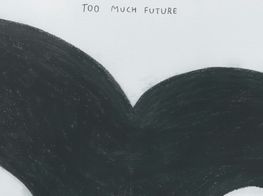 In her work, Berlin-based artist Christine Sun Kim, whose first language is American Sign Language (ASL), approaches the concept of sound via deconstructive exercises, experiments, and observations through drawing, painting, and performance. Over