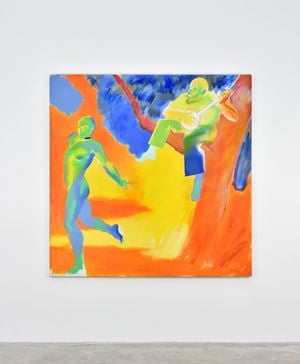 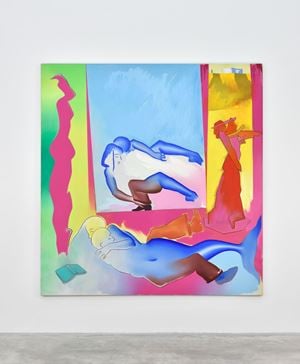 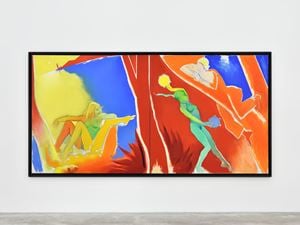 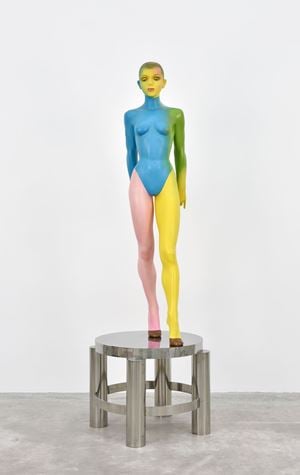 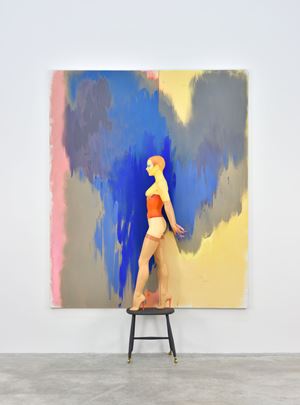 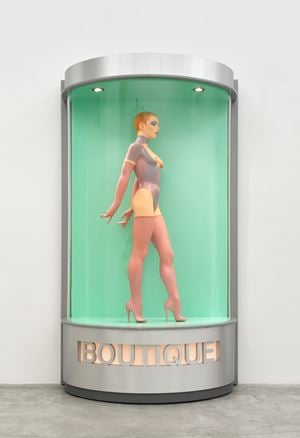 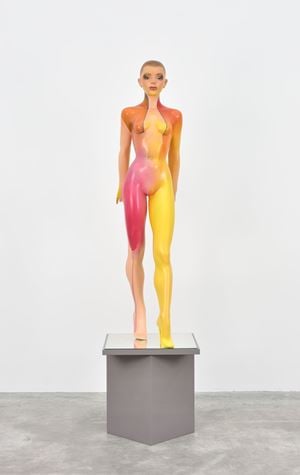 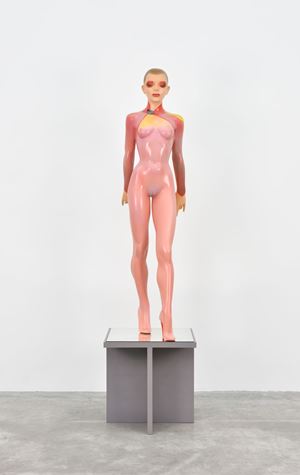 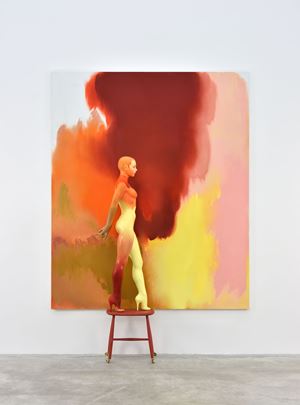 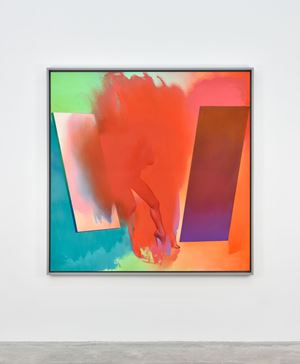 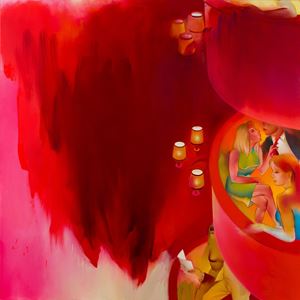 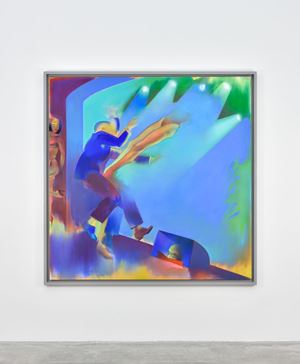 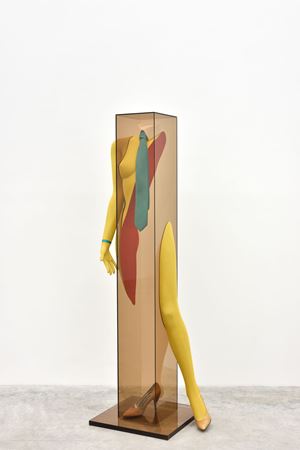 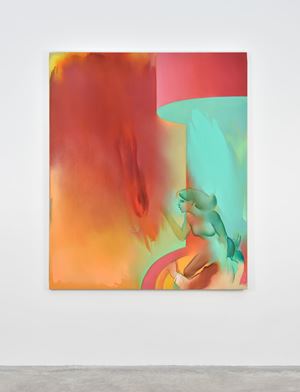 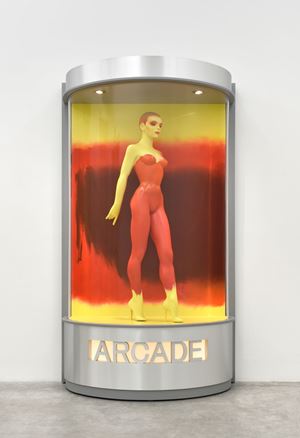 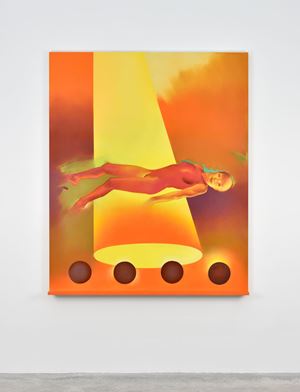 Almine Rech is pleased to announce the first solo exhibition of Allen Jones with the gallery.

Allen Jones is part of an extraordinary generation of artists from North America and across Western Europe born in the 1930s who, children during the horrors of world war two, were art students in the shift from the austerity of the recovering fifties into a decade of the prosperous swinging sixties with its celebration of a new found sense of consumerism and sexual liberation. There had not been a comparable decade in Europe since the twenties. In the world of painting artists who typified this generation included, in the States, James Rosenquist and Tom Wessellmann, Martial Raysse in France, Michelangelo Pistoletto in Italy, and Konrad Klapheck in Western Germany. In Britain there was Allen Jones. All of these artists went on to have distinguished and inventive careers over several decades until the present.

Jones quickly became a central figure, arriving on the London art scene shortly after the likes of Eduardo Paolozzi and Richard Hamilton, who were central very early on in defining the new norms of Pop Art with The Independent Group. Pop Art, as its name suggests, was fascinated by, and used as material, popular consumerist media culture and all these artists soon made glamorous names for themselves. Central among them was David Hockney but the then equally controversial Allen Jones developed a remarkable individual visual vocabulary that he has continued to develop to this day in endlessly inventive ways. For Allen Jones is an artist, as this exhibition in Paris beautifully demonstrates, who points to all the ambivalences within contemporary society and culture, that in so many ways are the very essence of art, as he draws modern life and equally transforms the great art of the past. In his own very particular language he continues to evoke the psychological and societal obsessions of the present.

His paintings, with their careful layering of glazes and paint, show him to clearly be a spectacular colourist. In turn they evoke a classical world that here in France might bring to mind the compositions of Nicolas Poussin, Jean-Auguste-Dominique Ingres, or the Henri Matisse of Luxe Calme et Volupté (1904) or La Danse (1910). Jones’s sculptures are carefully constructed parodies of commercial window shopping, which simultaneously remind the viewer of the amazing realism of Degas and his sculpture of female Parisian dancers and bathers. Like Degas, Jones has become increasingly obsessed with the theatre and cabaret–views from the balcony to the stage and back again. It gives him a particular opportunity to reflect on the way theatrical light is able to shine and create magic that in turn becomes a wonderful excuse for Jones’s virtuoso displays of colour on canvas.

However, an essential concern–an obsession even–for Jones has always been the history of abstraction as it developed in Europe with Kandinsky and Malevich especially and then in America with artists such as Rothko, Newman and Clyfford Still. In the more recent years whole areas of Jones’s paintings are carefully calibrated homages to colour out of which the subject–be it figures or an empty theatrical balcony–seem to emerge as if belonging to the essential abstraction. The mannequins of his sculpture are themselves treated as though flat surfaces with oil paint applied to them, which transforms these unlikely alien figures, normally dressed in the latest fashion, into abstract if paradoxically sexy objects that demand viewing with the criteria we give to a celebration of colour and abstract composition, sometimes fluid, sometimes hard edged.

Other paintings show intertwining lovers. Indeed another painting from the mid- to late-eighties titled The Studio was produced on a canvas deliberately the same size as Picasso’s revolutionary Les Demoiselles D’Avignon (1906), itself set in a place of dubious entertainment. But the paintings of Allen Jones perhaps evokes more Matisse’s masterpiece of 1904 mentioned above, inspired of course by the famous poem of Baudelaire. Jones’s more recent paintings and sculptures, gathered in this exhibition, develop further different and complex possibilities of three dimensionality in painting itself and in the dressed-up painted object (the shop Mannequin itself has a long tradition going back to the concerns of Dada and Surrealism).

If the painting is itself fundamentally abstract the figuration is nonetheless always able to find its way sensually to centre stage–often in all senses. This is at the heart of Allen Jones’s art, much like it is in his generationally much younger fellow artist Jeff Koons, who has huge admiration for Jones and his art. Like Jeff Koons, Allen Jones draws his huge knowing aesthetic strength from the classical past while engaging in a critical and celebratory exercise of contemporary obsessions with human relations between the sexes. Allen Jones’s art comes together using the extraordinary possibilities of painting and the third dimension within the object figure managing by virtue of colour to masquerade as painting too.

Almine Rech Paris will be pleased to welcome you to a conversation between Allen Jones and Norman Rosenthal on Saturday, March 7, 2020, 5- 6 pm

Sign up to be among the first to know when new exhibitions by Allen Jones or at Almine Rech open.
Sign UpLogin