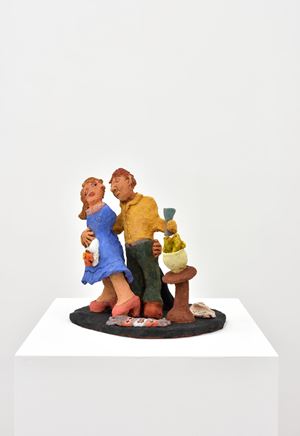 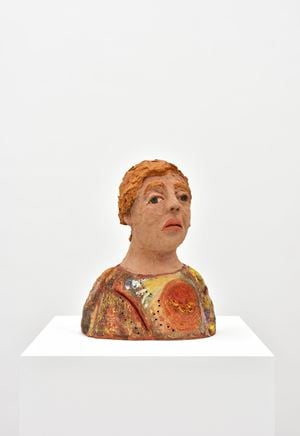 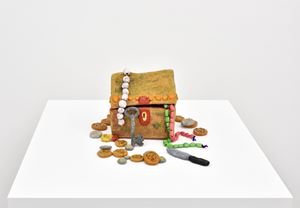 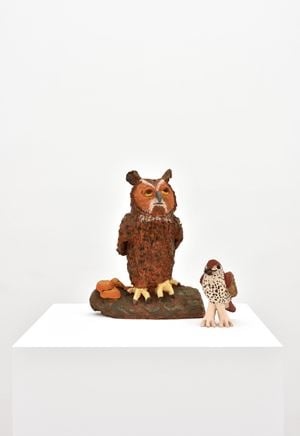 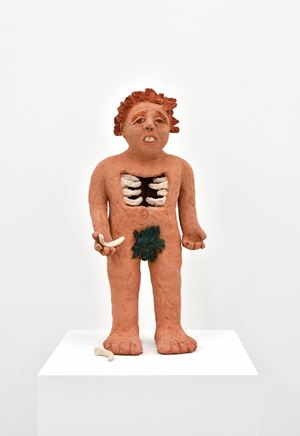 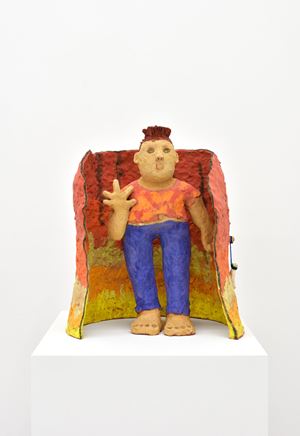 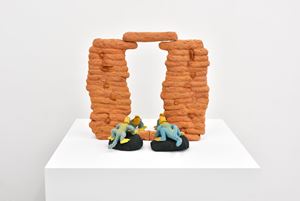 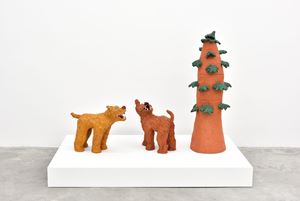 Almine Rech is pleased to present Hideout, Sally Saul's first solo show with the gallery. The exhibition will include a new selection of whimsical ceramics by Sally Saul that have never been exhibited before.

Throughout her long ceramics practice, Sally Saul has combined both playful and subversive visions. Her scenes and characters are truly emotive and serve as witnesses to the subjects she picks: Trouble or Searching.

The show is titled after her new iconic character Hideout, mysteriously sheltering within a rainbow-wall. As a statement, the artist uses humour in her representations of humans and her unique sculptures of flora and fauna.

This show brings together a new series of colourful and figurative ceramics.

Some of her large-scale pieces, such as Framing and Dog Fight, go beyond the status of figures and become a scenography set. Rising from the ground, both sculptures tell a story and look like cartoon characters from an animation movie.

Couple is a surrealistic scene of romance–the reflection of a joyful relationship between two lovers, who live together and work successfully hand in hand.

Sally Saul embodies contemporary figurative ceramics, her works stand out for expressivity and poetry, as well as the rawness of their approach.

She lives and works in Germantown, New York.

Sally Saul grew up in Ithaca, a small city in central New York State, where her father was a professor of local government at Cornell University. She attended college at Boulder, Colorado, attracted to the area by the beauty of the Rocky Mountains. She continued her education at San Francisco State University and was awarded a master's degree, with honours, in American Literature, in 1973. That year Sally met the pop surrealist painter Peter Saul who was living in the San Francisco area at the time. They were married in 1975 and are together today, 45 years later.

In 1981, the couple moved to Austin, Texas, where Peter had obtained a teaching position at the university. There was a large room on the ground floor of the art building devoted to ceramics. Sally took note, went in, got to know the professor Janet Kastner and proceeded to become a ceramic sculptor. She was grateful for the opportunity to take classes at the university, for the support offered, and for the freedom to express herself visually.

While in Texas, Sally had several opportunities to exhibit her work in Austin, San Antonio, and Houston. Since moving to Germantown, a tiny but scenic village, two hours north of New York City in 2001, Sally's sculpture has become known to a much larger part of the art world through group exhibitions at the Zurcher Gallery, Canada Gallery, Venus Gallery in L.A. a solo show Knit of Identity at the Rachel Uffner Gallery in 2017, and Blue Hills, Yellow Tree, a solo show at Pioneer Works in 2019, all of which were noted in the art press.

Sally's background in literature gives her a deep and original feel for a very wide range of subjects, from animals she is particularly fond of, owls and other birds to more conceptual subjects, confinement and gender. To quote Sally herself, 'Memory, or an editing of memory informs several of my pieces-material in a quilt, a pattern, the shape and feeling of a room-fragments that evoke time and place and act as a talisman.' Today, she works with confidence and enthusiasm in her new studio to express the way she feels.

Sign up to be among the first to know when new exhibitions by Sally Saul or at Almine Rech open.