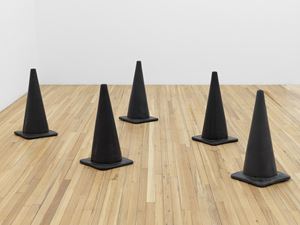 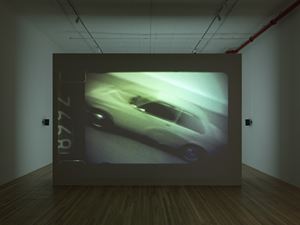 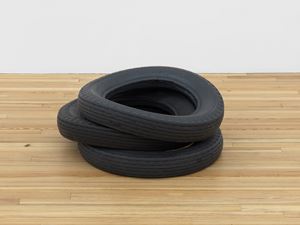 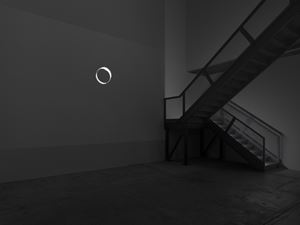 Mansfield Deluxe takes its title from a new sculpture of the same name–a group of three rubber tires cast from a mold of a Fiat car tire produced by Mansfield Tire, a now defunct company that was based in Everson's hometown in Ohio. Through this process of translation, Everson places a renewed focus on this vernacular object whose production was part of the automotive industry that once fuelled the economy of Mansfield, and has now all but disappeared. Positioned as a relic or artifact, Mansfield Deluxe continues a thread within Everson's practice that seeks to shift the narrative around labour, reversing the hierarchy that positions industry over individuals. This strategy is also seen in Signal 30, a sculpture composed of five cast traffic cones, the identical model to those used in a 1959 driver's education video of the same title filmed in Mansfield. Now banned for educational purposes, the film featured real footage of victims of car accidents dying, or dead filmed by police officers. Initially intended to promote the use of seat belts, the film and its memory now serve as a harsh reminder of violence and loss.

Projected on a freestanding wall in the centre of the gallery is Everson's new dual-channel projection Opel, which reflects on Everson's own high school experience with Army Recruiters, who to this day maintain a disproportionate presence in working class communities, particularly communities of colour. At the time, recruiters would often tell Black American teenagers that it was cheaper to purchase a car in Panama, or West Germany, and ship it than it would be to purchase one in the U.S. Comprised of two films, individually titled Kadett C Three and Rekord C Three, they each depict toy cars, filmed in black in white, moving from meditative takes to scenes of fast-paced movement, in which the cars nearly blur into abstraction. Accompanied by voiceovers in German, and Spanish, describing automobile performance, the work seeks to distill the complex registers of Everson's experience, and the dangled promise of ownership into an abstract, fleeting form.

This interest in the translation of moments and experience takes a more universal approach in the works installed in the gallery's double height space. Condor, 2020, documents a solar eclipse's path of totality in Chile, as it moves slowly into focus. Darkness creeps in from the edges of the frame, until a brief moment where all that is present is a small halo, which opens again to flood that camera with light. Together, Everson works reflect a desire in his work to shift focus away from the larger systems we inhabit, in order to create empathetic depictions of life's inevitable cycles of joy, love, labor, and loss.

Mansfield Deluxe is Kevin Jerome Everson's third exhibition with the gallery. Since the late 1990s, Everson has created a singular body of work that conflates archival, documentary and scripted footage, blurring the distinctions between what is real, and what is simulated. Everson works to obstruct the narratives he presents, which in turn shifts his films from representations of the everyday to a meditation on the abstract and emotive registers that exist within it. Everson's work is currently included in New Labor Movements at the McEvoy Foundation for the Arts, San Francisco, on view through April 24th, 2021. In 2020, Everson was the recipient of the Berlin Prize at the American Academy in Berlin. His films have been exhibited and screened widely, including Centre Pompidou, Paris, France, 2019, The Museum of Contemporary Arts, Los Angeles, CA, 2019, _Polly: Recent Films and Collaborations by Kevin Jerome Everso_n, BAMcinemafest, Brooklyn, NY, 2018, Quality Control: An Affinity for Technique, National Museum of African American History and Cultural, Washington D.C., 2018, So I Can Get Them Told: Retrospective, Tate Modern, London, 2017, Kevin Jerome Everson, Berkeley Museum of Art Pacific Film Archives, Berkeley, 2017, among others. Additionally, Everson participated in the 2018 Carnegie International, Carnegie Museum of Art, Pittsburgh, the 2017, 2012, and 2008 editions of the Whitney Biennial, Whitney Museum of American Art, New York, as well the 2013 Sharjah Biennial.

Sign up to be among the first to know when new exhibitions by Kevin Jerome Everson or at Andrew Kreps Gallery open.
Sign Up