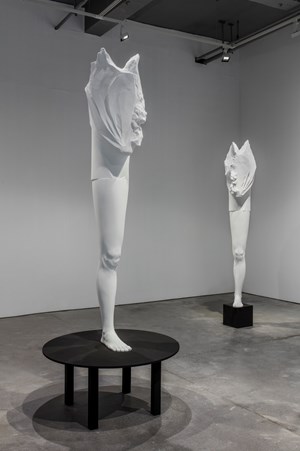 ARARIO GALLERY SHANGHAI is pleased to announce Korean artist KIM Inbai's first solo exhibition Child 愚者 in China. The exhibition will run from 18 –May to 14 July, 2019. KIM Inbai's artistic practice primarily adopts the mediums of sculpture and installation, and with his unique narrative approach to these mediums, Kim has gained wide attention in Korean sculpture world.

This exhibition showcases KIM Inbai's skepticism for conventions and existing approaches to perception, as well as the products that reflect on the act of viewing. The artist rejects conventional knowledge and breaks free from the shackles of traditional education by returning to adopt an infantile approach to practising art. An innocent small child is often unable to distinguish the front from back, left from right, let alone the kind of knowledge 'numbers' represent. In this exhibition, it is easy to discover these directional relationships and numerical notions have been gradually blurred or even disappeared.

Backside reduces the former properties of the contouring lines through its translation from the two-dimensional to three-dimensional space, so it may be difficult for the viewer to distinguish to which surface the lines belong to, the side, the front or the back shadow? Due to the impact of modern sculpture's affinity to abstraction, KIM Inbai's sculptures are highlighted by their large scales that differentiate from traditional figuration and the modern minimalism. For example, Count consists of two conflated bodies, the two feet and a head placed towards them in a state of observation. The artist attempts to undermine his boundaries with others in searching for the middle ground. Thing Modeled on 2 also presents skepticism on conventional ways of perception. The head portrait is placed directly on the laps, while to think of this piece as 'non-sensical' undertaking is a judgement based on our long indoctrinated conventions.

We often believe that the adults who have the command of knowledge are wiser than innocent children. Had we realize that the wise one, may in fact be the fool that seems wise actually isn't; and a fool, may strike as foolish but has wisdom. The adult's way of learning is not necessarily right, whose conventional approach often results in preconceived bias, and whose judgment on the things of this world is not necessarily accurate, while the seemingly innocent child does not possess the logical thinking and perceptions of the adults, may actually see through the essence of things.

The Chinese title of this exhibition, 愚者(The Fool) is different from the English title Child at first glance, which can be traced back to the etymon of the term '어린이' (child) in Korean. In ancient Korean, the meaning of this term shifted from '어리석다' (foolish) to '나이가 적다' (young age), and for this reason, the Chinese and English titles of this exhibition refer to these respective meanings.

Sign up to be among the first to know when new exhibitions by Inbai Kim or at Arario Gallery open.